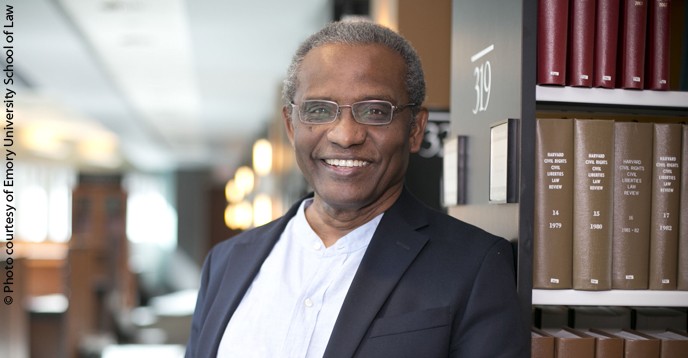 An expert on human rights in cross-cultural perspectives, An-Na’im has sought to reconcile his identity as a Sudanese Muslim with his staunch commitment to universal human rights. He argues that human rights should be people-centred, not state-centric. Explaining his controversial views, An-Naim says that he expects opposition to his ideas. “If I’m not resisted, I’m not relevant,” he insists.

When you refer to the three “Cs” of human rights, what exactly do you mean?

I sometimes speak in terms of the three “Cs” of human rights − the concept, the content and the context.

The concept is universality, as we talk about human rights as the rights of the human, but do we really mean that? Are we really capable of protecting the rights of the human as such? Which state does that? Sadly, the truth is to the contrary − human rights rhetoric is used by states as a weapon to demonize each other in their power politics, instead of being universal principles of public policy to protect the dignity of all human beings.

The second “c” refers to what these rights are, and here we must admit that it is a work in progress rather than already implemented as public policy on the ground.

The third “c” raises the question whether human rights principles are operationalized on the ground, and made accessible to people whose rights are at stake. What does human rights mean to a person living in extreme and permanent poverty in Cairo, Karachi or Lagos − what difference has human rights made in their lives?

What should the role of the state be in the protection of human rights?

I find that the protection of rights anywhere happens at the level of civil rights, not at the level of human rights – in other words, protection is granted by the states to citizens and so-called “lawful residents,” never to human beings as such.

That is why refugees and migrant workers, for instance, do not enjoy protection of their human rights as proclaimed by the Universal Declaration of Human Rights (UDHR). Even the rights of citizens and lawful residents are determined by the state every step of the way. It is always states which decide to negotiate treaties with other states, ratify or ignore relevant international treaties, and determine the manner and scope of protection of the rights of any person subject to their jurisdiction.

The entire human rights field is under the authority of state sovereignty. Global international law does not pretend to force any state to do anything. The United Nations and all other international organizations are constituted and governed by states, they can only do what states permit them to do, and in the scope and manner authorized by the states.

All this may be appropriate for the present state of human development, but these principles are not good for the protection of human rights. That is why I speak of the paradox of self-regulation by states, in contradistinction to entrenched fundamental rights which are supposed to be beyond control and manipulation by the state.

But then, how do we ensure respect for human rights?

I do not mean that we don’t need human rights, or that their protection cannot be realized in practice. The point I do wish to emphasize is that we must be clear on where human rights come from and in which manner − including questions such as how these rights are defined and how they are operationalized.

In my view, human rights should be defined by the people who accept and live by them on the ground, and not imposed by former colonial powers on their former colonies or by delegates of post-colonial states, and international bureaucrats.

Second, human rights norms must be implemented through realistic contextual steps that are suited to the needs and resources of relevant communities, and not by enacting high-sounding legislation to be presented at sanitized meetings of international organizations, and diplomatic or academic conferences.

Third, strategies of implementation must be deeply contextual, and under the control of the human subjects of these rights everywhere.

Could you give us an example of this?

If I want to combat female genital mutilation (FGM) in Sudan, for example, I can’t do it by having a declaration issued in Geneva. I can’t do it by even Sudan issuing a statute. But I can do it by changing attitudes in the communities. That is the key.

In Sudan, the British amended the Penal Code to make FGM punishable by two years’ imprisonment in 1946, the year I was born. I am now 72, and FGM still exists, for more than ninety per cent of the population. To my knowledge, there has not been a single prosecution. “Honour” killing is a similar problem. These are clear areas where we have to have transformation.

What is the best way to bring about change?

We need to go beyond bureaucratic, formulistic ideas − to inspire the imagination of people, and to drive change.

Sometimes people don’t try to bring about change because they don’t think it’s possible. But they are wrong. See how transformative thinking has worked in the gay rights movement, for example, within a short span of twenty years. When I moved to Atlanta, Georgia, in the United States, in 1995, sodomy was a crime for which you were sent to prison. In 2015, it became a constitutional right for same-sex couples to marry.

When you think of the speed by which this transformation happened, it shows that you don’t have to start with legal change. In fact, if you start with cultural and social change, the transformation in a community is really the driving force of change – not the consequence of change.

When you refer to the culture of human rights, which can be promoted through internal discourse and cross-cultural dialogue, what do you mean?

By human rights culture, I am referring to internalized values − since early socialization of children − which are reinforced throughout our lives. These values tend to support respect for and protection of the human rights of others, though they may not be identified in these terms. Within human beings, and among their communities, there are impulses for respecting the dignity of the other, and also striving for inter-communal harmony, co-existence and mutual interdependence.

All these are human rights values, in my view, though they are not represented as such in common discourse. I have argued since the 1980s for cultivating the culture of human rights for each community, as the basis of deepening and expanding international consensus within cultures, and by dialogue among different cultures. The 1992 book Human Rights in Cross-Cultural Perspectives: A Quest for Consensus, which I edited, expands on this.

On a more personal level, how did you start taking an interest in human rights from an Islamic perspective?

As I struggled with my own conflicting belief in Islam and opposition to Sharia in the 1960s, I was fortunate enough to encounter Ustadh (revered teacher) Mahmoud Mohamed Taha. It was  his innovative interpretation of Islam which helped me reconcile my belief in Islam and commitment to upholding human rights.

Ustadh Taha was a Sudanese engineer by profession, and a Muslim Sufi reformer by religious orientation. He participated in the struggle for independence in Sudan of the 1940s, and was a political prisoner under the Anglo-Egyptian colonial administration of Sudan. He was the founder and president of the Republican Party, which agitated for independence of Sudan as a democratic Republic, hence the name. After an extended period of imprisonment, continued into a period of religious discipline, Ustadh Taha emerged in 1951 with a reformist interpretation of Islam.

Following his tragic execution in January 1985, and the suppression of his reform movement in Sudan, I left my home country but continued to develop my own understanding and application of the reform methodology of my teacher, and striving to live by his model.

Tell us about your “Future of Sharia project”.

My current “Future of Sharia” project combines several themes of my academic work and advocacy for social change, as these elements have evolved in my thinking since my law student days in the 1960s to the present time. In terms of Islamic reform and scholarship, I have managed to reconcile my commitment to a secular state from an Islamic perspective, as I have done regarding human rights earlier, with my religion.

Through my website/blog, I have called for a global public debate on the ideas based on my 2008 book, Islam and the Secular State.

I am convinced that ideas of human rights and citizenship are more consistent with Islamic principles than with claims of a supposedly Islamic state to enforce Sharia. In the book, I present Islamic arguments for the separation of Islam and the state, while regulating the relationship between Islam and politics. I argue that the coercive enforcement of Sharia by the state betrays the Koran’s insistence on the voluntary acceptance of Islam. Individual piety can be reconciled with collective religious identity – in order to be a Muslim by conviction and free choice, which is the only way one can be a Muslim, I need a secular state, one that is neutral regarding religious doctrine, and promotes genuine religious observance.

An internationally renowned Sudanese-American legal scholar and author, Abdullahi Ahmed An-Na'im is the Charles Howard Candler Professor of Law at Emory Law in Atlanta (United States), associated professor in the Emory College of Arts and Sciences, and a senior fellow of the Center for the Study of Law and Religion of Emory University.