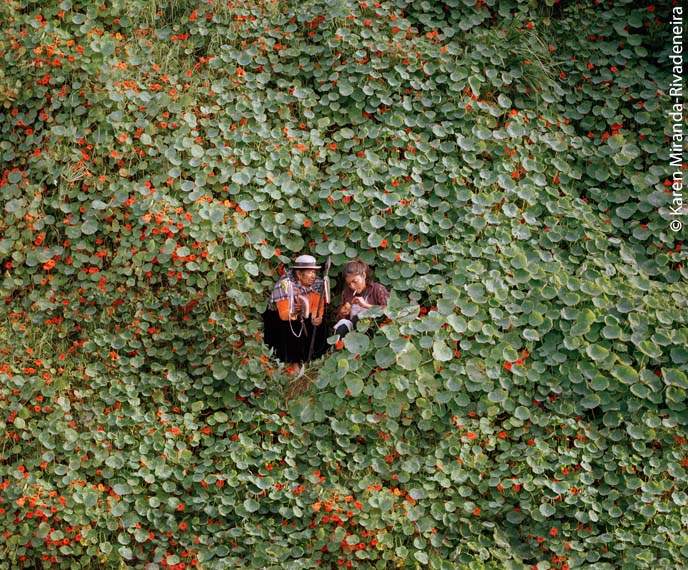 Mama Matilde of Ecuador’s Waranka ethnic group is a seer, a cleanser of souls, a dancer, a clown, and a healer, just as her ancestors have been for centuries. She is pictured here with photographer Karen Miranda Rivadeneira (United States-Ecuador).

“When you drink water, think of the source” (Chinese proverb)

Most indigenous languages are in danger, even though they are the main conveyors of knowledge that provide original solutions to contemporary challenges. “The major influence on the sorry state of their languages is the fact that indigenous peoples are threatened themselves,” says Minnie Degawan (Igorot, Philippines) in her introductory article. “In the Philippines, the government has launched the use of mother tongues in schools, but no resources are available in terms of teachers and learning materials to allow for indigenous children to be taught in their mother tongues,” she explains.

It is a similar situation on Easter Island, where Rapa Nui is “being swallowed up at a dizzying speed by Spanish, with significant negative consequences on the community’s values,” according to the educator María Virginia Haoa (Rapa Nui, Chile), who sees education as a means of guaranteeing the survival of her language.

This survival also depends on the media, say Avexnim Cojti (Kʼicheʼ, Guatemala) and Agnes Portalewska (Poland), two experts from Cultural Survival, who tell us why indigenous media is very often forced to operate illegally, in spite of favourable national legislation.

In Africa, it is precisely national legislation that is lacking, while at the regional level countries formally commit themselves to defending the rights of indigenous peoples, according to indigenous women’s rights activist Hindou Oumarou Ibrahim (Mbororo, Chad).

In Canada, First Nations are the most vulnerable of the marginalized, says filmmaker Manon Barbeau, who is the driving force behind more than a thousand documentaries made by members of indigenous communities. Her project aims to restore their self-confidence and make them more visible on the international scene. Siku, another project developed by the Inuit of Canada, demonstrates the ability of these peoples to combine the oldest knowledge with the most modern technologies.

The designation of 2019 as the International Year of Indigenous Languages (IY2019) gives us the opportunity to review issues related to indigenous languages and knowledge in other latitudes as well: among Fijians in the Pacific, the Dong in China, the Sámi in Swedish Lapland, the Bahima in Uganda, the Maori in New Zealand and the Mixtec in Mexico.

In the magazine’s sections, we take a detour to Bangladesh where life resumes after each flood. We also examine the water-related hazards that affect the vast majority of the world's population.

Two names from world literature are in the spotlight : Wystan Hugh Auden, with his previously unpublished  reflections on freedom and art and the Armenian poet Hovhannes Toumanyan, whose 150th birth anniversary is being celebrated this year.

Our guest is the contemporary Sudanese thinker, Abdullahi Ahmed An-Na’im, who shares his ideas on human rights from an intercultural perspective.

Finally, by offering you the opportunity to learn more about the Nowruz celebrations, the New Year of the Persian calendar, the Courier’s entire team wishes you an excellent 2019!

Indigenous languages: Knowledge and hope
Manon Barbeau: A Canadian filmmaker dreams of creating indigenous cinema
Rapa Nui: Back from the brink
Radio: A lifeline for indigenous peoples
Hindu Oumarou Ibrahim: Speaking up for the rights of the Mbororo
“This is not your home, my daughter”
SIKU: Mixing high-tech with ancient know-how
The Mixtec: Heeding nature’s language
Of rice, fish, ducks and humans
The Sámi of Jokkmokk: Challenging modernity
Returning to the Lau Islands, all sails out
The Tuawhenua explain their attachment to the land
VIDEOS: Voices from indigenous peoples

Reflections on freedom and art

Nowruz: The seeds of a new day
Hovhannes Tumanyan: A passion for storytelling
Delivering water security in a changing world