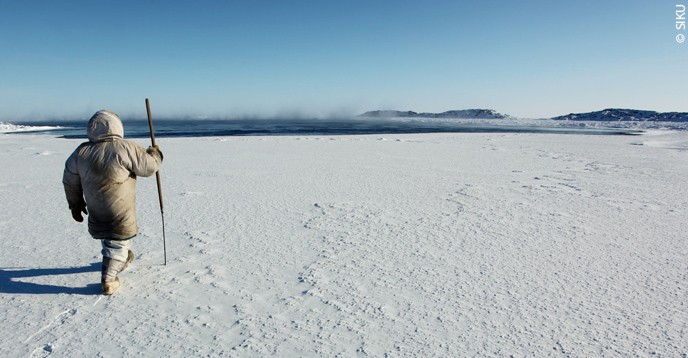 An eider duck hunter probes the condition of the ice.

An Inuktitut word for sea ice, SIKU today refers to a web platform that is revolutionizing access to the ancient knowledge and current research of communities living in Canada’s Arctic zone. A story that began modestly with a few snap-shots of eider ducks struggling for survival on the ice floe has evolved into an extraordinary project over fifteen years, combining the oldest knowledge with the most modern technologies.

It was colder than ever that winter day of 2002, in the Qikiqtaaluk region in Nunavut, Canada. Not far from the community of Sanikiluaq, a group of Inuit with harpoons led the way over the thin, newly-formed ice. A team of biologists cautiously and literally followed in their footsteps. The ice fog rising from the open water made the scene particularly dramatic.

A large floe edge on the east side of the Belcher Islands had recently frozen over, and a group of eider ducks were struggling to keep the remaining open water from freezing. This was critical for them to dive and access the mussels and sea urchins they relied on for food.

The edges of the ice were littered with the carcasses of dead ducks that had become frozen into the advancing ice. The Inuit leading the expedition, active hunters from the community – Simeonie Kavik, Elijah Oquaituk and Lucassie Ippak – turned to the biologists and said, “This is what we’ve been telling you about. In the early 1990s, one of our elders noticed that there were as many dead eiders on the ice as there was gravel on the beach”. The hunters and elders of Sanikiluaq did alert the Canadian authorities at the time, but the phenomenon escaped the attention of the scientific community.

One of the biologists on the 2002 expedition to study the eider die-offs had designed an underwater camera to film the eiders as they dove under the sea ice to forage in winter. I was a Ph.D. student at the time, and spent the next two winters at the edge of the sea ice – under the guidance of Kavik and Oquaituk – collecting footage tracking eider survival methods.

The footage was unprecedented. After seven years of working closely with almost all the families in Sanikiluaq, the project resulted in the documentary, People of a Feather (2011). The film, which went on to win a dozen awards, highlights the community's unique relationship with eiders, and the shared challenges of environmental change that they face.

The Inuit of the Belcher Islands are not just interested in eider ducks – their life depends on them. While most birds, including eiders, migrate south, Hudson Bay eiders remain around the Belcher Islands through the winter. The community use eider skins to make traditional parkas and their meat is critical to food security year-round, in the absence of caribou here.

Putting together the puzzle pieces

It was in the wake of the film’s release that the Arctic Eider Society (AES) was formed in 2011. The groundwork was already well-prepared, thanks to the community-driven research programmes developed with the support of the Canadian government’s International Polar Year (2007–2008) and to their mobilization, dating back to the early 1990s. Around the same time, the Sanikiluaq community launched a programme bringing together twenty-eight Inuit and Cree communities across Hudson Bay and James Bay, to synthesize their knowledge of environmental change. The project resulted in the 1997 publication, Voices from the Bay, which to this day remains a definitive source for knowledge on the region.

An Inuit-driven charity, AES aims to empower local people to take charge of research, education and stewardship of their environment. The early programmes focused on assessing changes in oceanography and sea ice – training hunters and youth to use salinity and temperature profilers; establishing time-lapse monitoring stations and carrying out ice-core and water sampling.

The creation of AES’s Community-Driven Research Network was given top priority. It includes Sanikiluaq (Nunavut), Inukjuak, Umiujaq, Kuujjuaraapik (Nunavik region of Quebec) and Chisasibi (Cree community in the Eeyou Marine Region of Quebec). Each of these neighbouring communities held a different piece of the puzzle, and by working together they could finally  provide a larger picture of environmental change in the region.

Drawing academic expertise from the University of Manitoba, Carleton University and ArcticNet and funding from the Nunavut General Monitoring Plan (NGMP), the Nunavik Marine Region Wildlife Board (NMRWB) and the Cree Nation of Chisasibi, the network has been able to develop partnerships. The increased capacity has allowed the tackling of new priorities, including those with the Northern Contaminants Program, and expanding to new regions with funding from Polar Knowledge Canada.

To involve youth, the network has partnered with Kativik Ilisarniliriniq, the Nunavik School Board, to develop a holistic Inuit-centred approach to training and education in the sciences. This has resulted in the Arctic Sea Ice Educational Package. Using interactive multimedia tools, it allows  young people to partner with hunters and to become directly involved in local research.

Regarding the second priority, the first-ever Hudson Bay Summit was held in 2018. It brought together twenty-seven Inuit and Cree communities from James Bay and Hudson Bay, and  representatives of ninety-seven organizations, to form the Hudson Bay Consortium – a forum for collaboration and coordinated stewardship for a region with complex inter-jurisdictional governance.

To address the third priority of sharing data in near-real time, the five communities in the network created a web platform in 2014. A simple base map and corresponding timelines were built, with profiles for community researchers where the results of salinity profiling, ice-core sampling and contaminants-monitoring could be shared online.

Not only did this prototype platform – initially named IK-MAP – prove compelling for data management among so many collaborators, it allowed each community to use its own knowledge systems to interpret data and see how their results fit into the bigger picture. In the past, the results of research programmes would end up, far too often, in an academic’s file cabinet down south, never to be seen again.

Today the information is accessible to everyone, including tech-savvy Inuit youth. New features have been added, allowing photos and posts to be tagged – not just for individuals, but also for wildlife species and the Inuktitut terminology for ice types, and for measurements, remarks and observations of all kinds.

In 2015, AES partnered with Google Earth Outreach to develop the first-ever Google Street View of remote sea ice – mapping not only the Sanikiluaq community, but also polynyas and floe edges in winter. The platform provided new ways for northerners and southerners to explore the Arctic sea ice.

The next step was to create a social media network and mapping platform, specifically by and for the Inuit. SIKU: The Inuit Knowledge Wiki and Social Mapping Platform was born, and came to life with new funding after winning the 2017 Google.org Impact Challenge in Canada. Siku, the Inuktitut word for sea ice, is itself a metaphor of ice as the structure of connectivity and change in the north.

Currently in beta mode, the platform has brought together a wide range of tools and services important to the Inuit. Profiles for each community provide local weather, tides and sea-ice imagery from multiple satellites in near-real time. Its official launch is scheduled for late 2019. A mobile app has also been developed to significantly expand the scope of systematically documenting indigenous knowledge and observations.

Of course, the mobile app is no replacement for using a harpoon to check the ice or for experiential learning through elders. But by combining the best of recent scientific approaches and centuries of indigenous knowledge, it is now possible to monitor dangerous sea-ice conditions, using Inuktitut terminology around the classification of ice, for example. It is hoped that this terminology will one day be integrated into machine learning approaches (artificial intelligence), so that indigenous communities can access relevant information remotely – in real time and in their own language.

Organizations and communities can now share their news, reports and blogs. Young people can immerse themselves in local culture by sharing hunting stories and traditional place names. Observations that were once typically written off as anecdotal by scientists can be systematically documented and quantified. The data management and permissions approach protection policy means local populations can now be in charge of managing their data, intellectual property and how they choose to share it.

A Canadian scientist and filmmaker, Joel Heath has spent twenty years in the Arctic with Inuit communities, combining his expertise in ecology, sea-ice dynamics and mathematical biology with Inuit knowledge. He is Executive Director and co-founder of the Arctic Eider Society (AES), an Inuit charity based in Sanikiluaq, Nunavut, Canada.

A co-founder and Board Member of the Arctic Eider Society (AES), Lucassie Arragutainaq (Canada) is Director of the Sanikiluaq Hunters and Trappers Association. A co-author of Voices from the Bay (1997), he is responsible for many initiatives to mobilize indigenous knowledge.