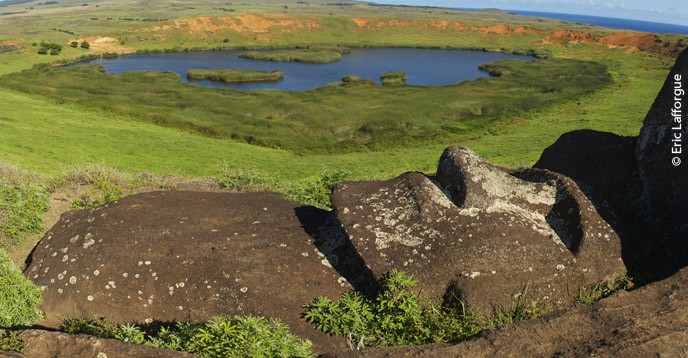 The Rapa Nui National Park, a UNESCO World Heritage site, is an open-air archaeological museum. Within it, Lake Rano Raruku is surrounded by moai, gigantic monolithic statues carved from the area’s volcanic stone.

Isolated in the middle of the Pacific Ocean, midway between the coasts of Chile and Tahiti, the young people of Rapa Nui (Easter Island) use Spanish to connect to the world. They have almost lost the use of their mother tongue, Rapa Nui, which is of Polynesian origin. Only ten per cent of youth master the language today, compared to  seventy-six per cent forty years ago. María Virginia Haoa of the Rapa Nui Language Academy sounds the alarm.

Why is the disappearance of a language a problem?

Language is inseparable from our way of being, our thoughts, our feelings, our joys and much more. It is through our language that we show who we are. If our language disappears, the whole socio-cultural  foundation of our community of speakers is put at risk.

On Easter Island, the Rapa Nui language no longer has a place in the socio-economic development of our community. Discarded by public services and tourist activities, the Polynesian language is being swallowed up at a dizzying speed by Spanish, with significant negative consequences on the community’s values.

For example, family farming has been abandoned in favour of the consumption of national and transnational products, the origin and manufacturing methods of which are unknown. In the past, farmers observed the phases of the moon to determine when to plant their crops. Today, this is a lost art.

Practices such as sharing produce between families and neighbours – a traditional form of solidarity and interaction – have disappeared, even as intergenerational dialogue is dying out. Young people spend their time playing video games and on social media, reducing the amount of time they spend interacting with their elders. Sometimes it is the parents – who are too busy working to improve their material comfort – who neglect the most important task: educating their sons and daughters, including about their own culture.

What is the current status of Rapa Nui as a living language?

According to a sociolinguistic survey conducted in 2016 by the Ministry of Education of Chile (MINEDUC) and UNESCO, half of all Rapa Nui speakers are concentrated in the age group of over 40.

In the 20-to-39-year age group, only about thirty-five per cent speak Rapa Nui. When they become parents, the vast majority do not transmit the vernacular language to their children. The daily language used by mixed-couple families (Rapa Nui and other) is generally Spanish.

It is becoming increasingly rare to find native-language speakers under 18. In 1976, when the language  was introduced as a subject in the school curriculum, seventy-six  per cent of schoolchildren spoke Rapa Nui. In 1997, this fell to only twenty-three per cent. In 2016, the figure was reduced to ten per cent. This is an alarming figure for all of us who are concerned about the future of our language and our culture.

What have you done to preserve the linguistic heritage?

In 1990, we created the Department of Rapa Nui Language and Culture at the Lorenzo Baeza Vega school. With the support of CONADI [the indigenous development agency within the Ministry of Social Development] and the Ministry of Education, we – with the school’s Rapa Nui teachers –  have produced primary education texts for science, history, mathematics, and for learning to read and write.

Since its inception in 2004, the Rapa Nui Academy has created pre-primary teaching materials and re-published reading and writing texts for the first two years of primary school. It has also produced two interactive CDs presenting the concepts of culture, mathematics and geometry.

The Academy devoted the year 2011 to conducting a survey, with the aim of expanding to three other schools and a public kindergarten on the island. In 2012, it participated in the evaluation of the law – passed in 2011 – to create an Indigenous Language Sector (ILS) in all schools attended by students of the indigenous peoples of Chile.

What is the current situation of the language in the educational system?

When formal education was introduced on the island in 1934, Rapa Nui was not part of it. The students learned everything by heart, in Spanish, without understanding anything. It made no sense to them. In addition, they had to learn from content that was completely foreign to them. To take just one example, when we heard the phrase, "the sun rises in the cordillera", we had no idea what it was about, because none of us had ever seen or heard of a mountain range.

Eight decades later, only one school, Lorenzo Baeza Vega, has a Rapa Nui immersion programme, which runs from pre-primary to fourth grade (ages 5 to 9). During its eighteen years of existence, this programme has had its ups and downs, depending on the changes in the number of hours allocated to the teaching of Rapa Nui. Because the school administration is obsessed with students scoring well on the SIMCE ( a national test), it has added hours of Spanish instruction in mathematics, language and physical education.

In 2017, we created the non-governmental organization (NGO) Nid Rapa Nui, which takes in about twenty children aged 2 to 3 years. It is autonomous, but we receive support from government institutions to pay teachers and to improve our infrastructure. In 2018, we also received support from the Ma'u Henua Polynesian indigenous community, which helped pay teachers' salaries. This association was founded in July 2016 with the aim of establishing a new management system for the Rapa Nui National Park, a UNESCO World Heritage site.

We are developing a teaching programme for the Nid Rapa Nui, which incorporates philosophical guidelines specific to the local culture, since the NGO’s objective is to start a school where courses will be taught entirely in the vernacular language.

Are there enough people capable of teaching in Rapa Nui?

No. We have enlisted several community leaders and employed  traditional teachers. All of them bring the know-how acquired within their families – and it is precious. But they need to be trained in planning and methodology, to improve the teaching of the Rapa Nui cultural content.

To remedy the shortage of teachers, I believe that young people should be motivated to study to become teachers. This could be done by increasing the number of scholarships to encourage them to enroll in universities such as Waikato, in Aotearoa (New Zealand), or in Hilo, Hawaii, in the United States, which have extensive experience in teaching Polynesian languages.

Finally, we hope to convince a Chilean university to take on the training of Rapa Nui teachers remotely, through online courses.

“The loss of a tongue is a social, cultural, and even spiritual problem” (interview in English)

Including the Excluded: Promoting Multilingual Education

Co-founder of the Rapa Nui Academy that she headed from 2004 to 2010, María Virginia Haoa is president of the NGO Nid Rapa Nui. She was awarded the Chilean government’s Gabriela Mistral Order of Merit in 2004 for her efforts to revitalize Rapa Nui. Haoa also goes by the name of Viki Haoa Cardinali.