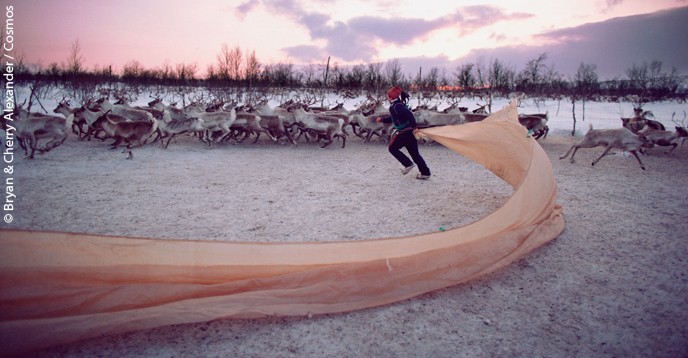 To gather his reindeer, this Sami herder from Kautokeino, Norway, uses a long band of jute cloth.

The territory in Swedish Lapland, where the indigenous Sámi raise their reindeer, is threatened by logging, the railway, dams and urban growth. To survive, the herders have adopted a variety of strategies that range from the partial adaptation of an urban lifestyle, to using their traditional knowledge to accurately understand the state of their pastures.

The Sámi, previously known as the Lapps, have lived in Europe’s Arctic Circle for thousands of years. It is estimated that there are now nearly 80,000 of them, the majority of whom live in the far north, in Sápmi (Lapland), which spans four countries – Finland, Norway, Russia and Sweden. Some have settled further south, notably in Oslo and Stockholm.

The indigenous people have set up a Sámi Council, which allows them to think about the future of their nation together, beyond the national borders that have never prevented them from feeling that they are one people. They have always had the remarkable ability to embody modernity while remaining rooted in tradition. They gave the United Nations Permanent Forum on Indigenous Issues (UNPFII) its first president and are actively involved in the Arctic Council.

The Sámi practise many trades. Some of them are well-known artists or intellectuals, painters, sculptors, journalists, writers, filmmakers or singers – such as the Finnish writer, musician and artist Nils-Aslak Valkeapää (1943-2001) or the Norwegian musician Mari Boine. However, the traditional Sámi profession par excellence remains that of reindeer herding.

A tremendous capacity to adapt

Let’s take the example of Jokkmokk. This major centre for reindeer husbandry in Sweden, in  Norrbotten (which covers 100,000 square kilometres, or a quarter of the country), is home to some 4,000 Sámi reindeer herders. They face many threats to their territory but at the same time, have an extraordinary capacity for resilience. Did they not adapt the first time, by inventing reindeer husbandry – even though they were fishermen, trappers and wild reindeer hunters – when the arrival of the first Scandinavian settlers four or five centuries ago caused a drastic decrease in the population of wild animals?

The Sámi also managed to overcome the devastation caused at the beginning of the twentieth century, when the English and the Scandinavians exploited their rivers – by creating dams to generate electricity – and dug their mountains to extract iron ore and produce steel.

The reindeer herders resisted again in the 1960s, when forestry became an industrial activity in Sweden and Finland at the expense of forest biodiversity. Later, in the 1970s, the Sámi created one of the first environmental alliances in Alta, Norway – bringing together human rights defenders and indigenous peoples to oppose the dam that would have led to the demolition of an important winter village.

The advance of colonization increasingly threatened their fishing and hunting rights and their rights to the land. Yet the reindeer herders are still there.

The Sámi of Jokkmokk take their reindeer to spend the summer in the mountains, descending  to the forests in the plains in autumn. These forests are now being exploited industrially and the pastoralists are forced to share their usufruct rights with forest landowners. This coexistence poses a considerable challenge because the timber growers practise clear-cutting the forests before reseeding them, and their heavy machinery degrades the soil and destroys the lichen that reindeer feed on, by digging snow. It takes thirty to fifty years for the lichen to grow back!

And that's not all. The breeding territory for the reindeer is now traversed and divided by a railway line that transports iron ore and passengers. Dams and artificial lakes obstruct the herders’ migration routes, while roads, cities and mines further reduce the grazing pastures.

Today, the Sámi must overcome a new challenge: climate change. In the north, it is not so much the global warming that is feared, as its consequences on the instability of winter temperatures. When the snow is covered with a layer of ice after successive heating and cooling, the reindeer can no longer dig for food.

When reindeer can no longer feed themselves, the herders are forced to buy hay or dry food pellets (which are expensive and not always tolerated by the animals), or better still, bags of lichen. Sometimes they gather lichen in areas where the reindeer cannot go, such as around an airport, for example. These are part of the new survival strategies adopted by the Sámi.

In addition, to supplement their income, they now try to sell reindeer meat directly or resort to temporary work in tourism. Women often turn to permanent employment as teachers, doctors, journalists, dressmakers or shopkeepers to balance the family budget – which has been weakened by the fall in their reindeer-herding income.

But the Sámi’s best weapon is their traditional knowledge. With a precise and detailed vocabulary, their knowledge of snow and metamorphism allows them to constantly monitor the condition of the pastures.

Unlike Western science, which has a static vision of load capacity (the number of animals that a given territory can support) based on a quantified botanical analysis, Sámi science is the science of immanence.

To assess the condition of a pasture, they dig and examine the layers and crystallography of the snow, thus estimating successive events through the seasons – the evolution of wind, temperatures, forest, ground vegetation – and their interrelationships with reindeer. Therefore,   they may not know the richness of the pasture in absolute terms, but are experts at gauging its condition at the time and place of their analysis, which allows them to act in the most appropriate way.

As climate change specialists, the Sámi base their resilience on their knowledge and practices, even if their capacity for action is limited by the severity of global change.

A French-Canadian researcher at the Laboratory of Eco-anthropology and Ethnobiology at the National Museum of Natural History (MNHN) in Paris, Marie Roué is Senior Research Director at the National Centre for Scientific Research (Centre national de la recherche scientifique, CNRS).