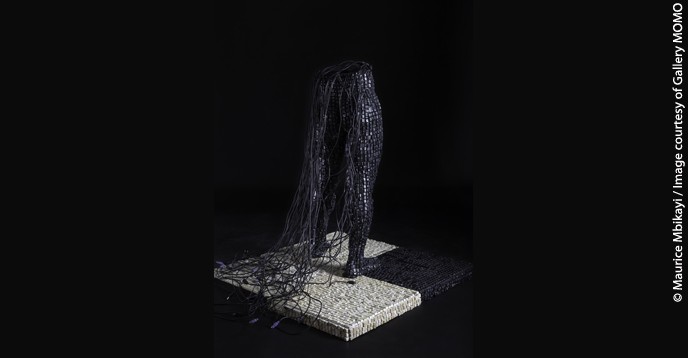 Narcisurfing Netizenship (2015), sculpture by Maurice Mbikayi from the Democratic Republic of the Congo, who is particularly interested in the impact of modern technology on society, especially in Africa.

He is 32 years old, and was born and raised in Senegal where he studied mathematics and physics. He earned master's degrees in artificial intelligence (AI) in France and  Canada before returning to Paris to pursue a Ph.D. Two years ago, he joined Facebook AI Research (FAIR). Founded in 2013, it has since established laboratories around the world − in New York, Menlo Park (California), Paris, Montreal, and most recently, in Seattle and Pittsburgh. This, in short, is the story of Moustapha Cissé, who tells us about his research, his motivations and his hopes.

What projects are you working on in FAIR’s Paris laboratory?

The topics that interest me most are the fairness, transparency and reliability of AI. In 2017, a group of colleagues and I were the first to develop algorithms (Houdini) that evaluate the robustness of intelligent systems, whatever the media: sound, video or other.

The robustness of algorithms is essential for the security of AI products. Imagine what could happen if someone malicious wanted to change the algorithm that drives your autonomous car! Any computer system can be attacked from the outside – by hacking or malicious modification. So it is essential to ensure its ability to resist such attacks.

Other work I recently published with a colleague involves equipping intelligent algorithms with the ability to treat all human beings fairly – which means that their behaviours are no different whether you are a man or a woman, black or white, etc.

In other words, I try to ensure that algorithms are not only as reliable as possible, but as relevant as possible to the needs and values of the human society they are meant to serve.

Studies have shown that facial recognition systems work better with European faces than with African ones, for example. It is the same for AI systems that identify skin cancers: they give better results for white patients than for black patients. Similarly, some systems were found to work better with men than with women. There is, therefore, a whole axiological dimension that has been neglected during the development of these systems. I am working with other colleagues to integrate this dimension from the very beginning in the construction of the AI models we are working on. This is a very important aspect of AI development, if we want it to be able to offer the same benefits to everyone.

You have said that the AI research community should stop focusing exclusively on “white people’s problems”.

I term all those technological advances that are in the realm of reality in the West “white people’s problems”, and the realm of the imagination elsewhere, such as autonomous cars, for instance. In Africa, but also in many parts of Asia and South America, people have other problems to deal with on a daily basis, the solutions of which depend on technologies that are much less sophisticated, and yet are non-existent. I believe that as a scientific community, we could have a much greater impact if we looked at the problems of these people to find solutions.

In concrete terms, how can people's lives be improved through AI?

When you give people the opportunity to access the information they need to build  social connections, get more quickly integrated into an environment, find work, etc., you improve their lives. If you use AI to diagnose their diseases earlier and offer therapies, you also improve their lives.

AI is already changing many industries and I would like it to be made available to all those who need it – not just part of the world's population – to meet the various  challenges of this century. For my part, I try to make things move in that direction, at my level. And I remain convinced that the AI research community is making giant strides.

How can the most disadvantaged be given access to these technological advances?

If this technology is to be accessible to all, it must be taught everywhere. It is through education that it will be placed in the hands of those who need it most. And I guarantee you that if you give them the means, people will find solutions to their own problems.

For the last three years, I have started, along with a group of friends, to teach AI at summer schools organized in Africa, by Data Science Africa, a non-profit professional knowledge-sharing group. Every summer, for a week or two, we introduce various AI techniques to students and teachers who want to discover this scientific discipline.

Last year, we launched the Black in AI initiative with a group of other friends. It brought together more than 200 black researchers (not counting the Americans) at the 30th edition of the world’s largest AI science conference, Neural Information Processing Systems (NIPS 2017). In previous years, we were not even ten, out of a total of more than 5,000 participants.

So, at our modest level, we are trying to democratize AI and access to information about the discipline. I am aware that this is not enough and that greater action is needed, but I remain optimistic.

Are these initiatives that you have launched on your own, or are they part of your work at FAIR?

These are initiatives that I launched personally with friends, but I have received logistical and financial support from Facebook, which sponsored most of the participation of about fifty young African researchers at the conference I just talked about.