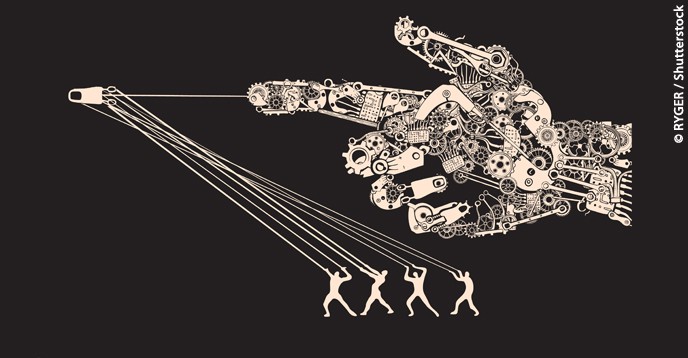 Public opinion is increasingly mobilizing against the development of lethal autonomous weapons.

Artificial intelligence (AI) has a growing number of applications in the security and military areas. It facilitates manoeuvres in the field, and can save lives when things go wrong. It also boosts the performance of armies by providing robot allies to combat forces. According to some experts, Lethal Autonomous Weapons Systems (LAWS) are creating a “Third Revolution” in warfare, after gunpowder and nuclear weapons. It is time we start worrying about the day when armies of robots are capable of conducting hostilities with full autonomy, without humans to command them.

Many corporations around the world are conducting vital scientific research in the field of AI. The results to date have been excellent – AI has learned to predict a person’s risk of developing diabetes with the use of a smartwatch, or to tell the difference, based on their appearance, between moles and certain types of cancerous growths. This powerful tool, which surpasses human intelligence by one of its most important characteristics, speed,  is also of interest to the military.

Thanks to the development of computer technologies, the weapons systems of the future will become more autonomous than those currently being used. On one hand, this empowerment will undoubtedly provide valuable assistance to combatants. On the other, it will bring its share of challenges and risks – it could set off arms races between countries, an absence of rules and laws in combat zones, and irresponsibility in decision-making. Today, many entrepreneurs, policymakers and scientists are seeking to prohibit the use of autonomous weapons systems, although military authorities insist that in combat, the final decision – to kill or not to kill – will always be made by a human.

We want to believe that.  But we must remember, nuclear weapons – which should never have seen the light of day, and which have faced opposition from the earliest phase of their conception – has nevertheless been well and truly used.

As in all other spheres of human activity, AI can greatly facilitate and accelerate work in the field of security. For example, researchers at the University of Granada, Spain, are developing software that uses neural networks to detect small  weapons – pistols, machine guns and submachine guns – on video images, almost instantly, and with great precision.  Modern security systems include a large number of surveillance cameras whose operators simply cannot view every image. The AI is therefore very useful for analysing these images, detecting the presence of weapons and informing agents in record time.

In another example, the Center for Geospatial Intelligence (CGI) at the University of Missouri in the United States has developed an AI system capable of rapidly and accurately locating anti-aircraft missile devices on satellite and aerial images. The system’s research capacity is up to eighty-five times faster than that of human experts. To form the neural network underlying this system, photographs representing different types of anti-aircraft missiles were used. Once the system was trained, it was tested on a set of photos. In just forty-two minutes, it found ninety per cent of the defensive devices. It took human experts sixty hours of work to solve the same problem, yielding the same result.

There are also more complex applications of AI. The US Army Research Laboratory (ARL), for example, is developing a computer system that analyses the human response to a given image. It will be useful for military analysts who need to view and systemize thousands of photos and hours of video recordings. The principle of the system: the AI tracks the person's eyes and face and compares  facial expressions with the images the person is looking at. If an image catches the person's attention (meaning the facial expression or the direction of his gaze changes), the software automatically moves it into a thematic folder. During the tests, a soldier was shown a set of images divided into five main categories: boats, pandas, red fruit, butterflies and chandeliers. He was asked to count only the images of the category he was interested in.  The images scrolled at the rate of one per second. The AI “concluded” that the soldier was interested in the boats category and copied these images into a separate file. 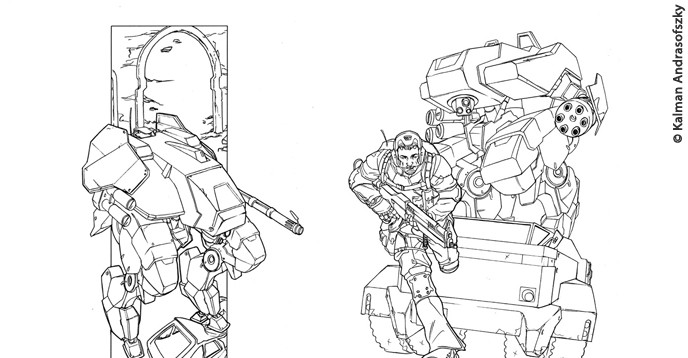 A linear perspective drawing originally intended for publication in Crisis in Zefra, a fictional narrative by Karl Schroeder, who is interviewed in this issue of the Courier.

In the field of combat

AI can also help soldiers in combat. In Russia, for example, the development of the fifth-generation Sukhoi Su-57 jet fighter is nearing completion; the plane could be commissioned before the end of 2018.  The software of this stealth plane’s flight computer contains elements of AI. Thus, in flight, the fighter plane is constantly analysing the quality of the air, its temperature, its pressure and many other parameters. If the pilot attempts to perform a manoeuvre and the system “estimates” the action will cause a crash, the pilot’s command will be ignored. If the plane goes into a spin, the same system tells the pilot how to steady the plane and regain control.

Meanwhile, Japan is developing its own fifth-generation fighter. Its research prototype, the X-2 Shinshin (“Spirit of the Heart” in Japanese), made its first flight in April 2016. A vast network of sensors, which will analyse the condition  of each component of the aircraft and determine any damage it has suffered, will ensure its “survival”. If, during combat, an aircraft’s wing or tail is damaged, its control system will be reconfigured so that its manoeuvrability and speed  remain virtually unchanged. The Japanese fighter's computer will be able to predict the exact time at which a damaged element will fail entirely, so that the pilot can decide to continue the fight or return to  base.

This makes AI a “godsend” – if such a term can be used for weapons and combat systems. A complex programme capable of optimally solving a particular problem – ten times faster than a human can – not only facilitates the work of a reconnaissance aircraft, a drone operator or an air defence system commander, but it can also save lives. It would be able to come to the rescue of crew members aboard a submarine in distress (remotely putting out fires in compartments abandoned by humans),  airplane pilots, or operators of damaged armoured vehicles.

Its speed of analysis and its ability to learn make AI attractive for combat systems. The military, although they still don’t admit it, are probably already tempted to create combat systems capable of operating on the battlefield in a fully autonomous manner, which means being able to identify a target, open fire on it, move around and choose the optimal trajectories, allowing them to get to safety.

A few years ago, the military authorities of China, Germany, Russia, the US,  and several other countries, announced that the creation of fully autonomous combat systems was not their objective. At the same time, the  military forces noted that such systems are likely to be created.

In 2017, the US Department of Defense completed and began to implement the Third Offset Strategy. It involves, among other things, the active development of next-generation technologies and concepts, and their use in future military initiatives.

On 1 September 2017, Russian President Vladimir Putin declared, at a public lecture at a school in Yaroslavl: “Artificial intelligence is the future, not only for Russia, but for all humankind. It comes with colossal opportunities, but also threats that are difficult to predict today. Whoever becomes the leader in this sphere, will become the ruler of the world.” He added that it would be “highly undesirable for anyone to gain a monopoly. So, if we become leaders in this field, we will share these technologies with the entire world.” But does this mean that we are not at the beginning of a new era of arms races?

On Earth, a growing number of areas are reliably protected by anti-aircraft and anti-missile systems, monitored by satellite and unmanned systems, and patrolled by ships and aircraft. In the minds of the military, only combat systems with AI will be able to, in the event of war, penetrate these closed areas and operate with relative freedom.

Today, there  are already combat systems capable of detecting and classifying their targets, and of controlling  the firing of anti-aircraft missiles, such as the S-400 advanced surface-to-air defence missile systems in Russia. America’s Aegis Combat System, which controls the arming of warships, works in the same way. Along the demilitarized zone, on the border with the Democratic People's Republic of Korea, the Republic of Korea has posted several SGR-A1 military robots in charge of surveillance. In automatic mode, they are able to open fire on the enemy, although they will not fire on people who have their hands up. However, none of these systems is used by the military in automatic mode.

The latest advances in AI development make it possible to create combat systems that can move around. Thus, in the US, unmanned aircraft are being developed to fly behind human-operated  fighter planes and target aerial or ground targets on command.

The fire control system of the next-generation Russian T-14 tank, based on the Armata universal heavy-crawler  platform, will be capable of autonomously detecting targets and bombarding them until they are completely destroyed. Russia is also simultaneously working on a family of tracked robots that will be able to participate in combat with human soldiers.

For armies, all these systems are called upon to perform several basic functions – most importantly, to destroy enemy targets more efficiently and to save the lives of their own soldiers. At the same time, there are still no international standards or legal documents to regulate the use of combat systems equipped with AI in war. Neither the Laws and Customs of War on Land nor the Geneva Conventions define which AI systems can be used in combat and which cannot. Nor is there any international legislation that would help identify those responsible for the failure of an autonomous system. If a drone bombards civilians autonomously, who will be punished? Its manufacturer? The commander of the squadron to which it was assigned? The Ministry of Defence? The chain of potential culprits is too long and, as we know, when there are too many culprits, nobody is guilty.

In 2015, the US-based Future of Life Institute published an open letter signed by more than 16,000 people, warning of the threats that AI-based combat systems pose to civilians, the risk of an arms race, and ultimately, the danger of a fatal outcome for humanity. It was signed, notably, by the American entrepreneur and founder of SpaceX and Tesla, Elon Musk, the British astrophysicist Stephen Hawking (1942-2018), and the American philosopher Noam Chomsky. In August 2017, Musk led a group of 116 AI experts to send a petition to the United Nations, calling  for a total ban on the development and testing of autonomous offensive weapons.

These experts believe that the creation of robot armies capable of conducting hostilities autonomously will  inevitably lead to the emergence of feelings of absolute power and impunity among them. Moreover, when humans are in a conflict situation, they make decisions that include, inter alia, their moral attitudes, feelings and emotions. The direct observation of the suffering of others still has a deterrent effect on military personnel, even if compassion and sensitivity eventually diminish among professional soldiers. In the event of the widespread introduction of LAWS, the effects of which can be unleashed simply by swiping the screen of a tablet on another continent, war will inevitably become nothing more than a game, with  civilian and military casualties reduced to numbers on a screen.

The UN versus LAWS