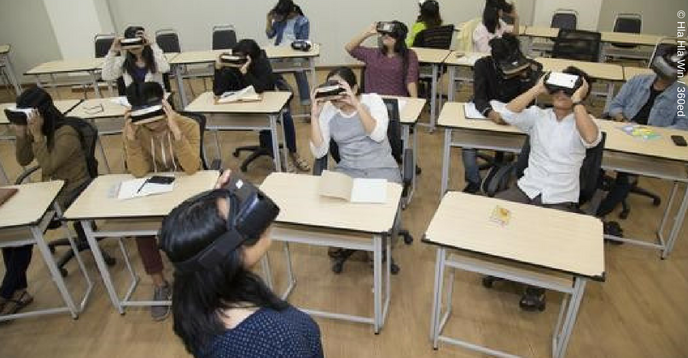 A teacher-training workshop, organized by 360ed.

Hla Hla Win  is on a mission to transform education in her native Myanmar, using virtual reality (VR), augmented reality (AR) and smartphone technologies. Her company, 360ed, was one of the winners of the Netexplo Innovation Awards 2018 presented at UNESCO Headquarters in Paris on 13 February, for using technology to democratize education.

As a young student, Win struggled to learn within the rigid, antiquated structure of the Myanmar education system. Years later, she has found a way to literally transform both the learning and teaching experiences, with the use of immersive virtual reality technology. Through her 360ed startup, established in Myanmar in January 2017, teachers are now able to visualize complex ideas and visit places they have never been to.

“We use a 360⁰ camera and screen to film experienced teachers abroad and help students and teachers in my country to see the world beyond borders,” Win, co-founder and chief executive of 360ed said. Keen to introduce the new teaching methods she had observed during higher studies in the United States, she realized that teachers in Myanmar found it impossible to relate to the concept of a student-centred learning environment. “The classrooms were too different,” she explains.

Since flying teachers across the globe to learn modern pedagogical theories was not an option, Win decided that she would use VR glasses to transport teachers and students to anywhere they wanted – including space, or the deep oceans. The €4 cardboard headset combined with a smartphone opened up a whole new world for teachers and students, literally.  So far, more than 5,000 of the country’s 500,000 teachers have had a chance to become acquainted with the technology.

With 360ed’s immersive footage, teachers can now visit and walk around classrooms in Finland or Japan, for example. “I want to show them that classrooms can be interactive,” Win said, noting that before this, not much had changed in Myanmar classrooms since she was a child, and the textbooks were all in black and white.

But now, the new technology allows for teaching in technicolour. Students can scan a page with a smartphone to bring up engaging 2D or 3D models. This encourages them to read more, and visualizing information enables better understanding and memory retention, Win explains.

Even while students learn, 360ed captures the best teacher-student interactions with virtual reality cameras to build a digital library of educational content for the professional development of teachers. This VR solution overcomes the lack of the most important part of teacher training – classroom observation, coaching, expert mentoring. It is also highly cost-effective, says Win.

The technology is particularly useful for students in remote areas, which typically have a shortage of good teachers, Win explained. The company also hosts workshops that give learners hands-on experience with modern technologies such as 3D printers and laser cutters.

Win – whose  decade-long journey from  early-school dropout in Myanmar to graduating from the Harvard Kennedy School in the US and becoming a social entrepreneur is fascinating  –  said the 360ed business model could also be applied to other developing communities and countries around the world.

“This is a tiny step in a long journey,” she added.