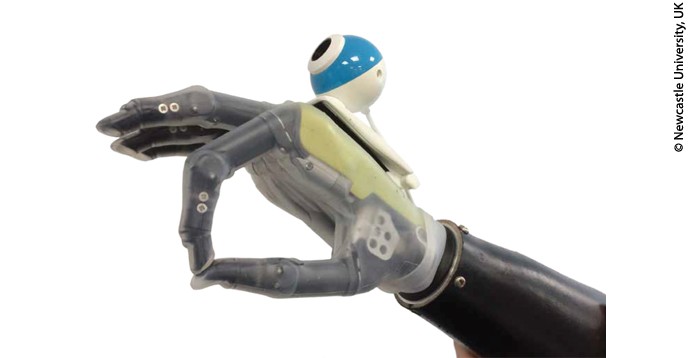 This bionic hand is capable of quickly and easily grasping any object, using a camera to assess its shape and dimension, which then triggers the correct movement to pick it up.

An intuitive bionic hand that can “see” objects by itself and is capable of precise and smooth handling, could change the lives of people with upper-limb disabilities. Designed by biomedical engineers at Newcastle University, this prosthesis illustrates the collaboration between human intention and the technical efficiency of artificial intelligence (AI).

When Doug McIntosh, an amputee taking part in a clinical trial, was able to quickly and efficiently grab an object for the first time in twenty years without the slightest effort, the designer of the bionic hand he was wearing said that no reward was greater than seeing the joy on his face.

“It showed my innovation was successful and my tester was happy with it,” said Dr Kianoush Nazarpour, a biomedical engineer at the Institute of Neuroscience at Newcastle University, in the United Kingdom. The bionic hand is one of the winners of the Netexplo Innovation Awards 2018.

The new generation of prosthetic limbs allows the wearer to grip objects without the use of the brain, automatically and without thinking. It is just like a real hand, whose ability to grasp objects correctly we take so much for granted.

The usual process requires the user to see the object, physically stimulate the muscles in the arm and trigger a movement in the prosthetic limb. In the new version, a tiny camera (which costs less than $1.50) fitted on the bionic hand takes a picture of an object in front of it, assesses its shape and size, and triggers a series of smooth movements to pick up the object – in a matter of seconds.

The device demands nothing more of the wearer than a quick glance in the right direction. Choosing from four different “grasps” – suitable for picking up a cup, holding a TV remote controller, gripping objects with a thumb and two fingers, or a pinched thumb and first finger – the hand uses artificial intelligence to continually improve its detection and grasping skills. It is ten times faster than current bionic limbs.

“Responsiveness has been one of the main barriers to artificial limbs – controlling them takes practice, concentration and time,” explains Nazarpour. “Prosthetic limbs have changed very little in the past 100 years – the design is much better and the materials are lighter in weight and more durable, but they still work in the same way,” he adds.

“The beauty of this system is that it’s much more flexible and the hand is able to pick up novel objects – which is crucial,  since in everyday life people effortlessly pick up a variety of objects that they have never seen before.”

Nazarpour, who has focused his research on improving prosthetics since 1999, grew up in Iran, dreaming of becoming a medical doctor. His research is motivated by the potential of prosthetics to restore function to individuals with sensorimotor deficits, by transforming thought into action and sensation into perception.

The crucial point is to understand how the peripheral nervous system responds to electro-mechanical stimulation of the limb, which helps to inform the design of prostheses. An electro-mechanical design and computer programme are available online, which can be adapted to or installed in various artificial upper-limb products.

“We produce a device and software control system, but not the artificial hands,” Nazarpour said, adding that the hardware costs just $1. Beyond the obvious benefit for disabled people, the bionic hand could belong to an intelligent robot, and be of interest to industry and businesses.

“We plan to cooperate with many prosthetics producers and we need to build up networks,” Nazarpour, whose team is still perfecting the design, said. “I hope this can help thousands of people in the world.”