Artificial Intelligence: The promises and the threats 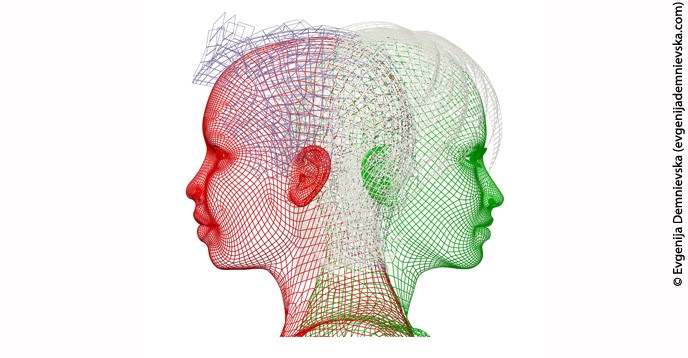 Digital work by the artist Evgenija Demnievska, representing Janus, the Roman god with two faces: one looking at the past, the other at the future. He presides over all transitions, from one state to another.

Computers and robots are now learning to make decisions! Of course, “deciding” is a big word for machines that have no consciousness and whose level of “reasoning” is not even as evolved as that of a frog. But the latest developments in artificial intelligence (AI) are enough to frighten some and to arouse the fantasies of others.

Between myth and reality, where exactly does the current research stand in this technology that threatens to disrupt all others? In its Wide Angle section, the Courier attempts to untangle the various paths of inquiry and offers some terminological signposts to help uninitiated readers to find their way through the fascinating but scary world of AI.

For many, the word “intelligence” is only a metaphor when it is applied to machines or robots which are destined ‒ we are assured ‒ to remain simple and humble assistants to humans. AI helps us transcend language  barriers through machine translation, to perform many routine tasks, even to do the housework, manufacture goods, detect illnesses at an earlier stage than doctors can, and to create prosthetics that can be activated by a thought.

Even so, the combination of deep learning and big data is not only provoking a revolution in  AI, but also setting off a Fourth Industrial Revolution, which our societies may not quite be prepared for. Many experts believe that AI is more of a cultural revolution than a technological one, and that education will have to adapt quickly to the new realities – so that future generations learn to live in a world that is radically different from the one we know today.

The question already being raised is: isn’t there a risk that data available to AI will be used to confirm preconceived ideas and prejudices? Racial profiling, censorship, prediction of the criminal personality, etc. – these discriminatory criteria are already being used by machines that are taught to analyse patterns of behavior. The more complex the technological development becomes, the more complex are the ethical questions it raises. The development of killer robots is a striking example of this.

Alongside these ethical challenges, there is the risk of monopolization of power. While AI is only taking its first steps in Africa, a small number of countries are investing billions of dollars in basic research – which is almost entirely in the hands of a few computing giants, as we know. These international challenges call for international coordination. This is essential if AI is to be developed responsibly.

As our regular readers already know, this is the 70th anniversary of the UNESCO Courier, and in each issue this year, we are publishing an article that takes a retrospective look at the exceptional adventure of our magazine. On 18 July we celebrate another exceptional anniversary: the centenary of the birth of Nelson Mandela, who, during his lengthy imprisonment on Robben Island was deprived of the right to read all publications – except the Courier!

In Trending, we offer you a chance to discover – via drone – the mysterious temples of Tiwanaku in Bolivia. You will also journey to the Galapagos in Ecuador, in the company of  Luc Jacquet, the director of March of the Penguins, which won an Oscar in 2006.

Twenty years after the terrible massacres of the war in Algeria, we go back in time with Our Guest, documentary film-maker Malek Bensmaïl – whose mission it is to create a contemporary memory of his country. The relationship between history, memory and artistic creation are also at the core of the reflection of Guadeloupean philosopher Alain Foix, to whom we have devoted the pages of our Ideas section.

In Zoom, we travel the world, this time in the company of Floriane de Lassée, a photographer fascinated by these walkers who transport loads on their heads that are as varied as they are voluminous. With their backs sometimes bent, but their heads still held high, these modern caryatids carry with them the weight of tradition, education, family – and life itself.

A lexicon for artificial intelligence
Artificial intelligence: between myth and reality
A bionic hand that sees
Of robots and humans
Chef Giuseppe heralds a new culinary era
The ethical risks of AI
Countering the monopolization of research
Democratizing AI in Africa
The Fourth Revolution
The threat of killer robots
Working for, not against, humanity
Humans, not machines, create meaning
AI and literature: is it really all for the best?
Learning to live in the time of AI
Audrey Azoulay: Making the most of artificial intelligence
Virtual reality in schools

Dancing the unspeakable, or the question of how the memory of slavery influences contemporary artistic creation

The UNESCO Courier is 70: The only journal Nelson Mandela read on Robben Island
Galápagos: where the inhabitants take charge
Man and nature reconciled
The secrets of Tiwanaku, revealed by a drone