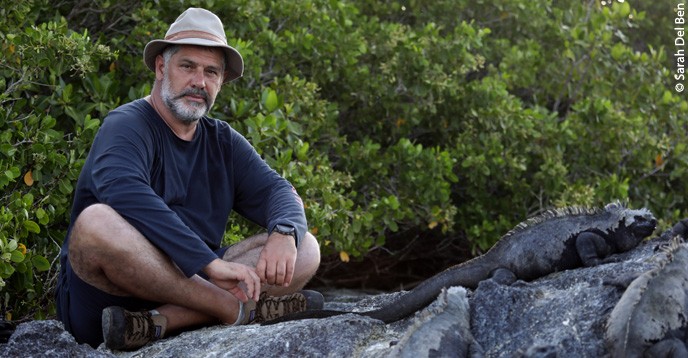 French director Luc Jaquet, on a reconnaissance trip to the Galapagos, with a team from UNESCO in March 2018.

In March 2018, French film director Luc Jacquet, who won an Oscar for his documentary March of the Penguins (2005), travelled to the Galápagos with French photographer and film director Sarah Del Ben on a scouting trip for a future film project. They were accompanied by experts from UNESCO's Man and the Biosphere Programme (MAB). This is their experience.

This morning, as I walked through the alleys of Santa Cruz, I saw an old man reading his newspaper. A sea lion casually kept him company, sitting on the same bench. A little further away, men just back from fishing were selling fresh fish that would be eaten the same day. I continued on my way, meeting passers-by, tourists and iguanas. Walking only a short distance away from the alleys, I could see children playing around century-old giant turtles, which were grazing peacefully in the grass.

I've travelled the world, but I've never before witnessed such proximity between different species, except perhaps in Antarctica. These places, so far from everything, are ultimately the last sanctuaries of harmonious life between humans and nature. And yet, in both cases,  living conditions are extreme.

In the arid lands of the Galápagos, burned by the sun and so hostile to life, human activity and biodiversity are not in conflict. One has the impression of being in a life-size laboratory and witnessing the brilliant demonstration that it is possible for humans and animals to live together – as long as we put in place sound resource management policies that allow ecosystems to survive. The archipelago should serve as a model for the rest of the world, on how to bridge the gap we have created between ourselves and other living beings.

Participating in the conservation of ecosystems is always a complicated task. But above all, we must learn to know and love them. If each of us does this, using our talents and know-how, I am convinced our collective efforts will bear fruit. I deeply believe that this collective energy will enable us to move towards a way of life in which we will no longer be colonizers, but managers – and towards a society that appreciates the value of the planet on which it lives.

For my part, I am fortunate to have the know-how that allows me to play the modest role of mediator between science and the general public. I can make images that convey messages with an effectiveness that is now proven. And I put this know-how at the service of the planet. That is why I want to support the UNESCO-MAB Programme – its aspirations are in line with mine. Its philosophy is based on an idea that I fully endorse, that of living together.

Cinema is a wonderful tool for awakening awareness. It uses the language of emotion and metaphor. Far from indulging in a moralizing or guilt-laden discourse – which has been proved to be relatively ineffective – a film acts on both the hearts and minds of its audience. It thus  incites them to appropriate things of nature – because of their beauty, because of their interest, or simply out of curiosity.

Climate change and the loss of biodiversity are complex issues. Cinema is able to make them accessible to the public by translating them into stories that are both simple and universal in scope. This is how it opens this first door that leads us onto the path of awareness.

And when we are on this path, we understand what an illusion it is to imagine for a moment – and yet the last four or five generations of human beings have done it – that we can live, cut off from nature. We come from nature and we need nature for things as basic as breathing, drinking or eating. But we also need nature so that we can dream.

This article marks the 30th session of the MAB Council in Palembang, South Sumatra, Indonesia, 23-28 July 2018.

French director and writer Luc Jacquet is best known for March of the Penguins (2005), which won an Academy Award for Best Documentary Feature in 2006. He has made around thirty films, most of which are documentaries.