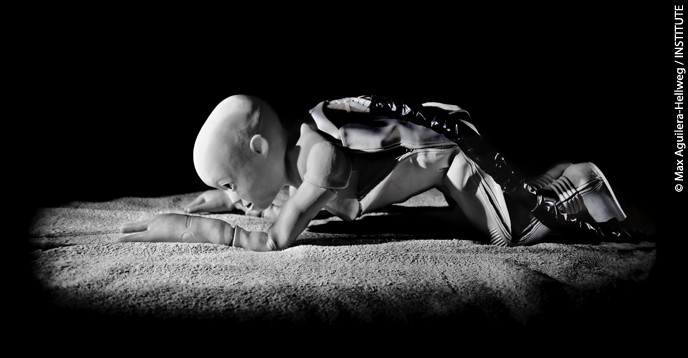 CB2, an infant robot, was built by Minoru Asada, Japan, who wanted to understand how robots learn.
Here, CB2 is being taught to crawl.

Are machines likely to become smarter than humans? No, says Jean-Gabriel Ganascia: this is a myth inspired by science fiction. The computer scientist walks us through the major milestones in artificial intelligence (AI), reviews the most recent technical advances, and discusses the ethical questions that require increasingly urgent answers.

A scientific discipline, AI officially began in 1956, during a summer workshop organized by four American researchers – John McCarthy, Marvin Minsky, Nathaniel Rochester and Claude Shannon – at Dartmouth College in New Hampshire, United States. Since then, the term “artificial intelligence”, probably first coined to create a striking impact, has become so popular that today everyone has heard of it. This application of computer science has continued to expand over the years, and the technologies it has spawned have contributed greatly to changing the world over the past sixty years.

However, the success of the term AI is sometimes based on a misunderstanding, when it is used to refer to an artificial entity endowed with intelligence and which, as a result, would compete with human beings. This idea, which refers to ancient myths and legends, like that of the golem [from Jewish folklore, an image endowed with life], have recently been revived by contemporary personalities including the British physicist Stephen Hawking (1942-2018), American entrepreneur Elon Musk, American futurist Ray Kurzweil, and  proponents of what we now call Strong AI or Artificial General Intelligence (AGI). We will not discuss this second meaning here, because at least for now, it can only be ascribed to a fertile imagination, inspired more by science fiction than by any tangible scientific reality confirmed by experiments and empirical observations.

For McCarthy, Minsky, and the other researchers of the Dartmouth Summer Research Project on Artificial Intelligence, AI was initially intended to simulate each of the different faculties of intelligence – human, animal, plant, social or phylogenetic – using machines. More precisely, this scientific discipline was based on the conjecture that all cognitive functions – especially learning, reasoning, computation, perception, memorization, and even scientific discovery or artistic creativity – can be described with such precision that it would be possible to programme a computer to reproduce them. In the more than sixty years that AI has existed, there has been nothing to disprove or irrefutably prove this conjecture, which remains both open and full of potential. 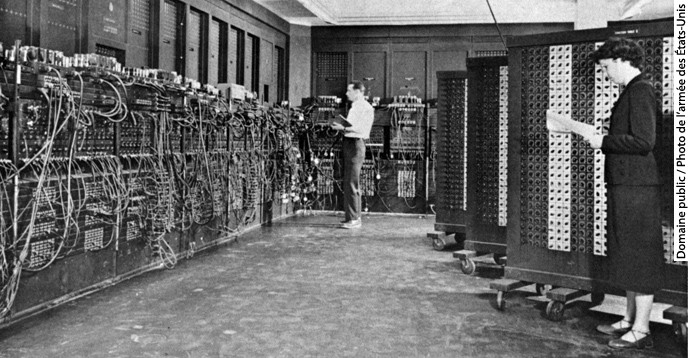 In the course of its short existence, AI has undergone many changes. These can be summarized in six stages.

◼️ The time of the prophets

First of all, in the euphoria of AI’s origins and early successes, the researchers had given free range to their imagination, indulging in certain reckless pronouncements for which they were heavily criticized later. For instance, in 1958, American  political scientist and economist Herbert A. Simon – who received the Nobel Prize in Economic Sciences in 1978 – had declared that, within ten years, machines would become world chess champions if they were not barred from international competitions.

By the mid-1960s, progress seemed to be slow in coming. A 10-year-old child beat a computer at a chess game in 1965, and a report commissioned by the US Senate in 1966 described the intrinsic limitations of machine translation. AI got bad press for about a decade.

The work went on nevertheless, but the research was given new direction. It focused on the psychology of memory and the mechanisms of understanding – with attempts to simulate these on computers – and on the role of knowledge in reasoning. This gave rise to techniques for the semantic representation of knowledge, which developed considerably in the mid-1970s, and also led to the development of expert systems, so called because they use the knowledge of skilled specialists to reproduce their thought processes. Expert systems raised enormous hopes in the early 1980s with a whole range of applications, including medical diagnosis.

Technical improvements led to the development of machine learning algorithms, which allowed  computers to accumulate knowledge and to automatically reprogramme themselves, using their own experiences.

This led to the development of industrial applications (fingerprint identification, speech recognition, etc.), where techniques from AI, computer science, artificial life and other disciplines were combined to produce hybrid systems.

Starting in the late 1990s, AI was coupled with robotics and human-machine interfaces to produce intelligent agents that suggested the presence of feelings and emotions. This gave rise, among other things, to the calculation of emotions (affective computing), which evaluates the reactions of a subject feeling emotions and reproduces them on a machine, and especially to the development of conversational agents (chatbots).

Since 2010, the power of machines has made it possible to exploit  enormous quantities of data (big data) with deep learning techniques, based on the use of formal neural networks. A range of very successful applications in several areas – including speech and image recognition, natural language comprehension and autonomous cars – are leading to an AI renaissance. 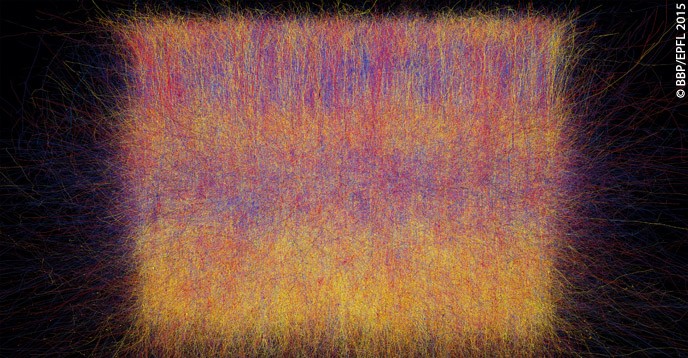 Simulation of electrical activity in a microcircuit of virtual neurons of a rat (2015), by the Blue Brain Project (BBP) team, part of Europe’s Human Brain Project (HBP).

Many achievements using AI techniques surpass human capabilities – in 1997, a computer programme defeated the reigning world chess champion, and more recently, in 2016, other computer programmes have beaten the world’s best Go [an ancient Chinese board game] players and some top poker players. Computers are proving, or helping to prove, mathematical theorems; knowledge is being automatically constructed from huge masses of data, in terabytes (1012 bytes), or even petabytes (1015 bytes), using machine learning techniques.

As a result, machines can recognize speech and transcribe it – just like typists did in the past. Computers can accurately identify faces or fingerprints from among tens of millions, or understand texts written in natural languages. Using machine learning techniques, cars drive themselves; machines are better than dermatologists at diagnosing melanomas using photographs of skin moles  taken with mobile phone cameras; robots are fighting wars instead of humans; and factory production lines are becoming increasingly automated.

Scientists are also using AI techniques to determine the function of certain biological macromolecules, especially proteins and genomes, from the sequences of their constituents ‒ amino acids for proteins, bases for genomes. More generally, all the sciences are undergoing a major epistemological rupture with in silico experiments – named so because they are carried out by computers from massive quantities of data, using powerful processors whose cores are made of silicon. In this way, they differ from in vivo experiments, performed on living matter, and above all, from in vitro experiments, carried out in glass test-tubes.

What are the ethical risks?

With AI, most dimensions of intelligence ‒ except perhaps humour ‒ are subject to rational analysis and reconstruction, using computers. Moreover, machines are exceeding our cognitive faculties in most fields, raising fears of ethical risks. These risks fall into three categories – the scarcity of work, because it can be carried out by machines instead of humans; the consequences for the autonomy of the individual, particularly in terms of freedom and security; and the overtaking of humanity, which would be replaced by more “intelligent” machines.

However, if we examine the reality, we see that work (done by humans) is not disappearing – quite the contrary – but it is changing and calling for new skills. Similarly, an individual’s autonomy and  freedom are not inevitably undermined by the development of AI – so long as we remain vigilant in the face of technological intrusions into our private lives.

Finally, contrary to what some people claim, machines pose no existential threat to humanity. Their autonomy is purely technological, in that it corresponds only to material chains of causality that go from the taking of information to decision-making. On the other hand, machines have no moral autonomy, because even if they do confuse and mislead us in the process of making decisions, they do not have a will of their own and remain subjugated to the objectives that we have assigned to them.

French computer scientist Jean-Gabriel Ganascia is a professor at Sorbonne University, Paris. He is also a researcher at LIP6, the computer science laboratory at the Sorbonne, a fellow of the European Association for Artificial Intelligence, a member of the Institut Universitaire de France and chairman of the ethics committee of the National Centre for Scientific Research (CNRS), Paris. His current research interests include machine learning, symbolic data fusion, computational ethics, computer ethics and digital humanities.