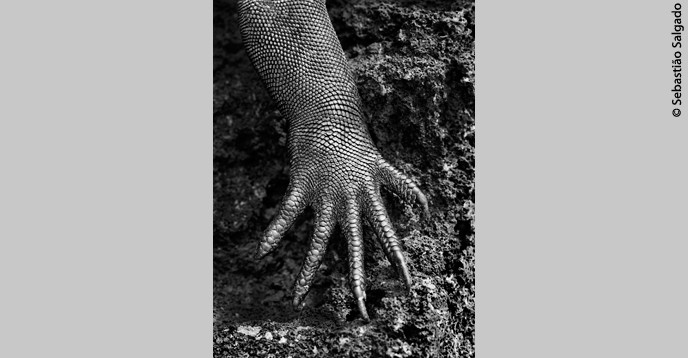 Photo from the Genesis series by Brazilian photographer Sebastião Salgado, taken in the Galapagos, Ecuador, in 2005.

What do we imagine when we think of the Galápagos? Giant turtles, marine iguanas, finches, Darwin and his theory of evolution? Yes, of course. But the Galápagos are much  more than all that – they are also a community of 28,000 inhabitants spread around four islands: Santa Cruz, San Cristóbal, Isabela and Floreana. And it is thanks to its people, who are invested in the participatory and sustainable management of the resources of the archipelago that some 240,000 tourists are able to visit this paradise each year. Ecuador’s Archipiélago de Colón has been a World Heritage site since 1978 and a Biosphere Reserve listed since 1984 in the global network managed by UNESCO.

Located a thousand kilometres from the mainland, the archipelago, home to one of the richest marine ecosystems in the world, includes thirteen large islands – and 147 small islands and rocks – that were formed four million years ago. Most of these are in fact submarine volcanoes, some of which rise more than 3,000 metres from the bottom of the Pacific Ocean. Covering an area of 7,500 square kilometres, the Archipiélago de Colón – Galápagos Biosphere Reserve covers the entire land surface of the Galápagos National Park.

The Galápagos are one of the best models of harmonious and mutually beneficial interaction between humans and their natural environment. The management strategy of the biosphere reserve focuses on food production that benefits the local economy, respects ecosystems and avoids the introduction of invasive species that would endanger endemic biodiversity.

At the heart of the reserve, the Galápagos National Park is a successful example of participatory management, allowing local people to live sustainably from the resources offered by activities such as fishing, livestock, tourism or recreation, through judicious management plans that include local food production and waste recycling. 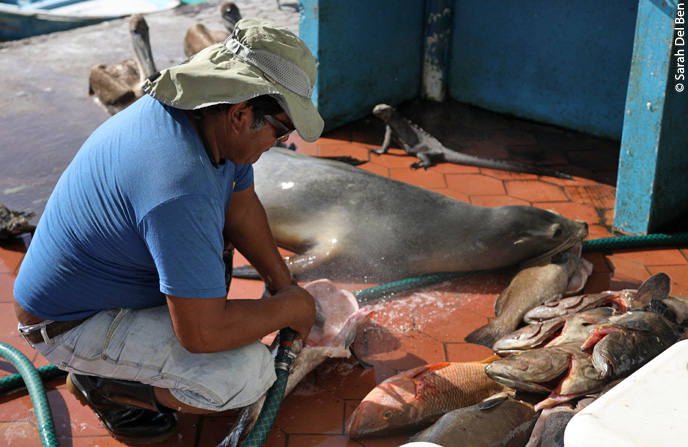 At the fish market in Santa Cruz in the Galapagos, March 2018.

To take the example of coffee, a cooperative was created in 2015 – bringing together farmers, roasters and traders – to improve the production and marketing of the eight varieties of arabica, cultivated for a century on the islands, at 250 metres above sea level. Renowned for its flavour, Galápagos coffee is sold at a price that is seven times higher than mainland coffee. The pesticide-free production, harvesting and processing comply with environmental protection rules – which will soon lead to the certification of these varieties as designations of origin.

The municipal government of Santa Cruz island has been developing and coordinating initiatives for the recycling of solid waste for the last ten years. These include launching education and awareness programmes on environmental problems, banning the use of polyethylene materials and prohibiting the import of beers and soft drinks in non-recyclable packaging.

But all these initiatives owe their success primarily to the villagers, who take ownership of the environmental protection and safeguarding projects. Craftsmen use recyclable materials to make objects; masons use recycled blocks or glass tiles in the construction of houses; the fishermen are mobilizing for the ban of plastic nets and collect the waste that pollutes the sea themselves, while all the inhabitants regularly engage in cleaning up the beaches. Since 2017, half of the solid waste from the islands has been recycled through a waste selection and recovery programme in which the local population is actively involved.

Through the Biosphere Reserves as a Tool for Coastal and Island Management in the South-East Pacific Region (BRESEP) project, UNESCO's Man and the Biosphere Programme (MAB) is currently working – in collaboration with the Government of Ecuador, the Galápagos National Park and local communities – to  extend the biosphere reserve to 133,000 square kilometres, so that it includes the Galápagos Marine Reserve, a genuine sanctuary for marine life. At the confluence of several ocean currents, where cold and warm waters mix, it is home to a multitude of endemic species, but also to species from different areas of the Pacific Ocean.

Financed by the Flemish government of Belgium, the BRESEP project supports the creation of biosphere reserves as tools for innovative and socially, culturally and environmentally appropriate practices. It also encourages the establishment of a collaborative network for the exchange of information and experiences on biodiversity loss, coastal zone management and sustainable development. The project particularly involves the coasts and islands of the South-East Pacific, located in Chile, Colombia, Ecuador, Panama and Peru. These efforts are contributing to improved livelihoods for the people of the region.

This article marks the 30th session of the MAB Council in Palembang, South Sumatra, Indonesia, 23-28 July 2018.