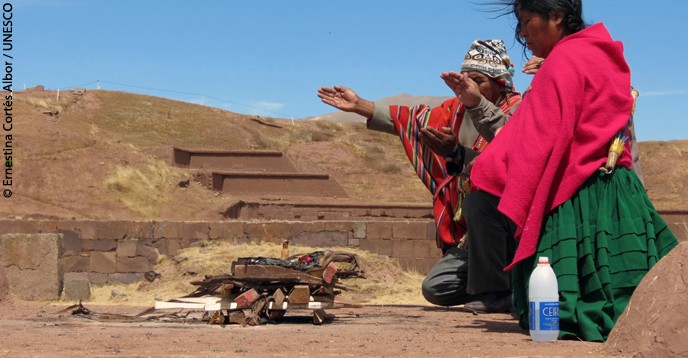 An Aymara ceremony in Tiwanaku, Bolivia.

Tiwanaku, the spiritual and political centre of Bolivia’s Tiwanaku culture, is seventy kilometres west of La Paz and fifteen kilometres from the shores of Lake Titicaca. Inscribed on UNESCO’s World Heritage List since 2000, the place still holds many secrets today. A UNESCO project reveals some extraordinary discoveries.

With its monumental complex of buildings and its location at more than 3,800 metres above sea level, Tiwanaku is one of South America’s most spectacular archaeological sites. A pre-Columbian city in the southern Andes, it was for centuries the capital of a vast and powerful empire that owed its supremacy to the use of innovative materials and techniques to improve agricultural production, thus increasing its economic power. It was from Tiwanaku that the eponymous culture spread, reaching its peak between 500 AD and 900 AD. From there, its influence radiated over a vast territory that included western Bolivia, southwestern Peru and northern Argentina and Chile.

Unfortunately, Tiwanaku was brutally plundered, following the collapse of its culture in the thirteenth century. The place attracted hunters of buried treasure like a magnet, and much of its valuable heritage disappeared. Numerous historical documents also show that the site became a quarry, from which to extract materials to build modern buildings – the evidence of which is still visible in the town centre nearby, and even in La Paz, the Bolivian capital.

President Evo Morales, who is of indigenous Aymara descent, chose Tiwanaku as a symbolic location for the inauguration of each of his three terms as head of the Bolivian state (in 2006, 2010 and 2015). As a result, the site has regained its prestige, and become an important tourist destination. It takes a lot of effort, however, for the visitor to appreciate and understand it fully. Tiwanaku is more an exercise in observation and documentation than in simple contemplation. This is because all that remains of the city’s majestic ensemble of temples and palaces are  the ruins or partially reconstructed remains of seven great buildings − the Akapana Pyramid, the temple of Kantatayita, the temple of Kalasasaya, the Putuni Palace, the Kheri Kala Palace, the Puma Punku Pyramid, and the  small  semi-subterranean temple.

These remnants, nevertheless, exhibit the unmistakable hallmark of  great  civilizations, with marvels such as the Puma Punku (Doorway of the Puma), made of solid blocks of sandstone, weighing upto 130 tons, assembled with copper staples. This was an astonishing feat for a civilization that lacked the concept of the wheel – some experts estimate that between 1,300 and 2,600 people would have been needed to lift the stones. The knowledge of the use of metal demonstrates the civilization’s military superiority. 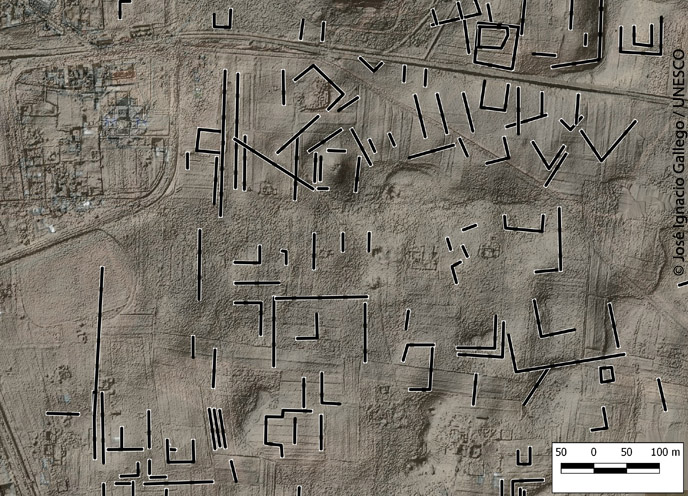 A map of Tiwanaku, created using data from the 3D model generated by a drone. The black lines probably indicate domestic structures in the Mollo Kontu area.

The need to provide the site with an updated management plan – a requirement for all sites inscribed on the World Heritage List – as well as an educational programme and museums to help solve some of Tiwanaku's riddles, constitutes the raison d'être of the Preservation and Conservation of Tiwanaku and the Akapana Pyramid project. Launched in 2015 by the UNESCO Office in Quito,  the $870,000 project is funded by Japanese Funds-in-Trust  for World Heritage. This ambitious undertaking, which has just been completed, also included a plan for sustainable tourism − since Tiwanaku is located on the Altiplano, a seismic zone in a valley set between two mountain ranges − and finally, at the request of the World Heritage Committee, the completion of a topographic survey of the entire site.

“I was already working in the field, so I proposed to UNESCO that this topography study be done using remote sensing, because now, with drones and satellites, topographic results with very high precision can be obtained,” explains archaeologist José Ignacio Gallego Revilla, who worked on the project on behalf of the Organization. “It took us a year to set it up. Since  I was collaborating with the Complutense University of Madrid, I thought of going to its Campus of Excellence − which is actually a group of laboratories formed by various faculties, with excellent professionals and very competitive prices. But we needed a drone that could fly at more than 4,000 metres and, as we couldn’t transport the one available at the university in Madrid to Bolivia, we approached a Swiss company that sells its aircraft in Chile and Bolivia. That company picked up the images which we then analysed in Madrid, in the laboratory.”

The imaging was done between October and December 2016 and the first results were obtained in May 2017. The drone provided a highly accurate topography of the entire archaeological site, with a margin of error of less than four centimetres.

The resulting map revealed the presence of a set of hitherto unknown structures that extend over the entire explored area, of more than 411 hectares. In total, the heritage area covers over 600 hectares − six times larger than previously estimated.

After the analysis, the images taken by the drone made it possible to identify the traces of a stone temple buried next to a hundred or more circular and rectangular structures of vast dimensions, which were possibly domestic units, as well as ditches, canals, roads and other constructions in different sectors. But the new data also redefined known monuments, such as Puma Punku, a temple complex of which only two hectares had been explored, and which we now know has two more platforms that are buried. “The drone has revealed that this a religious complex covering seventeen hectares, which is three times the size of the Great Pyramid of Giza in Egypt,” explains the archaeologist.

“Suddenly we had a map of the site and of everything that is still buried there,” Gallego Revilla added. “For me, it’s the discovery of a lifetime: Tiwanaku has been one of the historical references of world archaeology for 500 years. As a researcher, things like this happen only once in your entire career,” he enthuses, displaying the maps and images that support his claim, on his computer.

Julio Condori, director of the Archaeological, Anthropological and Administrative Research Centre of Tiwanaku (CIAAAT), the site’s managing body, has been involved in the project since its beginning. For him, the new topographic map is in itself a conservation tool. “We now have 650 hectares under study,” he notes. “This marks a milestone for further research and an expansion of the area under high-level protection.”

Another strong point of the project is that the indigenous communities that inhabit the site, on its northern and eastern sides, were consulted at all times. The municipality of Tiwanaku currently includes three towns with twenty-three communities, and some 12,000 people, who live in the archaeological zone itself, and its immediate surroundings. “At each stage of the project, we had a very dynamic interaction with the inhabitants. I would say that this is precisely the key that allowed us to reach this result,” adds Condori. “Members of the Huancollo and Achaca communities participated last year in the surveys we conducted to verify if the reality corresponded to data provided by the drone, and they did so with great pleasure. We have to continue communicating our results so that they can take ownership of them.” At the same time, the number of national and international visitors – more than 125,000 in 2017 – continues to increase.  “With that income, the site is economically self-sufficient, and it gives us the means to work with architects, chemists, geologists, etc.,” says Condori. “We hope to continue working with the municipal and national authorities, and of course, with  UNESCO’s support.”

According to an Aymara legend, the ancestors concealed the most emblematic monument of Tiwanaku in the Puerta del Sol, the Gate of the Sun. It was an important secret that would save humanity when it reached the brink of the abyss. Fortunately, that moment does not seem to have arrived yet. Instead, what is certain is that all the good work and the flight of a drone has opened up a new era for the culture, that from the shores of the sacred Lake Titicaca,  established the most advanced society of its time and managed to create a new kind of state hitherto unknown in this corner of the American continent.

The publication of this article coincides with the 42nd session of the World Heritage Committee, held from 24 June to 4 July 2018, in Manama, Bahrain.