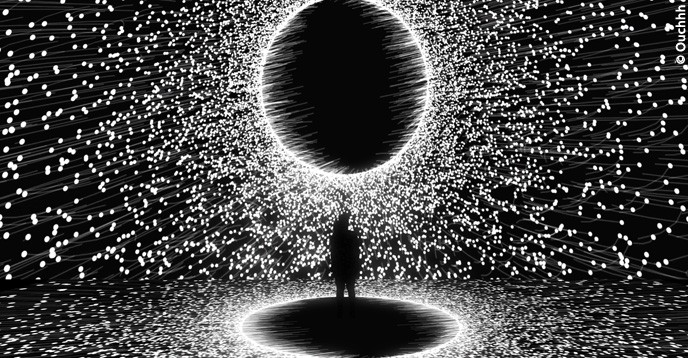 Karl Schroeder devotes his time to reading, studying, observing and imagining futuristic stories. Internationally renowned as one of the stars of science fiction, his books have inspired experts in new technologies and artificial intelligence (AI). In addition, he puts his imagination to work for companies and governments, to help them anticipate their technological, economic and social transformation. For the Canadian novelist and essayist, AI is more a cultural than a technological revolution – one that requires reflection on ethical, governance and legislation issues.

Besides your passion for digital and technological innovations, what are your sources of inspiration?

I devote a substantial part of my time to reading great philosophers. This allows me to have an overview, to consider the possible connections between technologies and societal movements. But, let me reassure you, I give just as much attention to the plot, so that my books are entertaining!

At the same time, the internet is an infinite source of information and distraction. Any navigation on the network is an opportunity for new discoveries that may encourage me to rethink, or even to change radically, everything I have just written. The internet really makes my research easier and I take only the best from it.

Do you foresee that AI could one day replace you as a writer?

At this time, I would equate the contribution of AI in my field to a randomization function, comparable to laying out a deck of cards, each of which could define a character, a scene, etc. For example, one of them could be “the king of the bad guys, he is next to a tower" and from there, I could develop a character, a plot.

I believe that creativity could eventually happen outside of human beings. So I can imagine that AI ​​will be able to create a book worthy of the name, but certainly not in its current form. These will be different kinds of machines, which we have not yet thought up. Today’s computers do not produce meaning, and human intervention is always necessary in the creative process, even if technological devices are becoming more refined and  approaching human capabilities.

In my novel, Lady of Mazes, there is a scene where AI ​​is going insane and sets up a kind of creativity bomb that fuels millions and millions of novels of exceptional quality, literally too many for people to read in all their collective lifetimes! And so, what happens to humans? Well, they adapt and continue their own creation.

Imagine that this creative bomb were to explode today. Why would that prevent me from continuing to write new books? Why should I think “me against a million books” and not “me and a million books?” I consider creativity – whatever its origin – an addition, and not a subtraction, to our own existence.

In fact, the notion of replacement is inherent in the concept of value. We could consider that everything can be replaced, according to a given value. As a writer, I could be replaced by a computer that has more commercial success than me. But this reasoning is only valid if commercial success prevails in the value system.

Does this mean you have no apprehensions about AI?

Determining whether AI is a threat or a benefit is entirely a human responsibility. There are many simplistic ideas about AI, how it works, and why it could be a threat to humanity. One could even say that there is an exaggerated anxiety focused on losing control of the machine. At the stage where we are today, this is not an effective way of thinking.

On the other hand, it is imperative to choose the direction that AI ​​will take and to decide how it will be used. If we decide to invest in supermachines for economic or political warfare, we are taking the path of building a hostile environment, of course. Society must make the right decisions for the implementation of AI.

If one day the products of AI ​​become independent of us, they will be like the children who leave us when the time comes, to lead their own lives! Our responsibility as parents is to nurture them and to instil positive values. This is the cornerstone of the argument.

Is this related to the question of ethics?

Yes, science fiction has been thinking about all this for a century! Policymakers and society are  only just beginning to think about these issues. It’s because we aren’t seriously examining the subject that we resort to free-wheeling every time a major technological innovation is introduced. Even so, the solution is simple – we must decide to implement a new technology only after having identified its social impact, determined its use and legislated accordingly.

I made this issue one of the messages in Lady of Mazes – to encourage us to plan the implementation of any technological innovation,  to better anticipate societal changes.

What will be the message of your next book?

It will undoubtedly deal with the future of politics and decision-making processes, and also the technological means that could take us to another level of civilization.

That’s a joke, but I am thinking of writing it with a pen! It will be an experiment of use, just like the ones that digital tools offer us. We must be able to distinguish writing from the means of writing. Technology is only a means, and it must be put back in its proper place. There is nothing we need to give up about what we are or what we want to be – we only have to prepare ourselves collectively.

A science fiction novelist, essayist and futurist, Karl Schroeder (Canada) is the author of  ten novels, translated into as many languages. They include Ventus (2000), Permanence (2002), Lady of Mazes (2005), Crisis in Zefra (2005) and Lockstep (2014). He received the Netexplo Talent Prize at UNESCO in February 2018