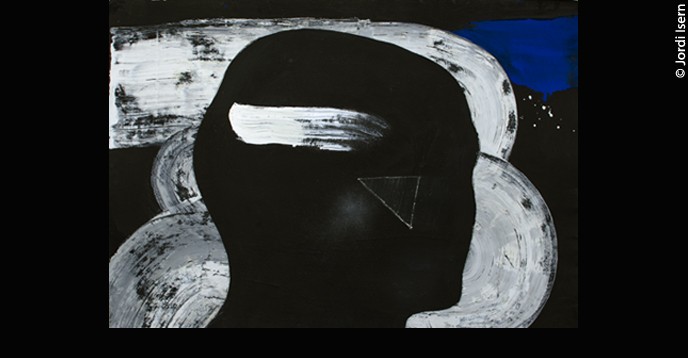 From the series Constellations (2014), by Spanish artist Jordi Isern.

In the term “artificial intelligence” (AI), the word “intelligence” is just a metaphor. While an AI may surpass humans in terms of calculating capacity, it is unable to ascribe any meaning to these calculations. For the Argentinian philosopher and psychoanalyst Miguel Benasayag, reducing the complexity of a living being to computer code is a mistake – just as the idea that machines can substitute humans is absurd.

What distinguishes human intelligence from AI?

Living intelligence is not a calculating machine. It is a process that articulates affectivity, corporeality, error. In human beings, it presupposes the presence of desire and an awareness of their own history over the long term. Human intelligence is not conceivable separately from all other cerebral and corporeal processes.

Unlike humans or animals who think with the help of a brain located inside their  bodies – which itself exists in an environment – a machine produces calculations and predictions without being able to give them any meaning. The question of whether a machine can substitute humans is, in fact, absurd. It is living beings that create meaning, not computation. Many AI researchers are convinced that the difference between living intelligence and artificial intelligence is quantitative, whereas it is qualitative.

Two computers in the Google Brain programme could apparently communicate with each other in a “language” that they themselves created and which humans could not decipher. What do you think of this?

That just doesn’t make any sense. In reality, each time these two machines are launched, they systematically repeat the same sequence of information exchange. And this is not a language, it does not communicate. It is a bad metaphor, like the one that says the lock “recognizes” the key.

It’s rather like when some people say they are “friends” with a robot. There are even smartphone applications that supposedly let you “chat” with one. In Spike Jonze’s film,  Her (2013), a man is asked a series of questions, which enables his brain to be mapped. A machine then synthesizes a voice and fabricates responses that trigger a feeling of being in love, in the man. But can you really have a romantic relationship with a robot? No, because love and friendship cannot be reduced to a set of neuronal transmissions in the brain.

Love and friendship exist beyond the individual, and even beyond the interaction between two people. When I speak, I am participating in something that we share in common, language. It is the same for love, friendship and thought – these are symbolic processes in which humans participate. Nobody thinks only for themselves. A brain uses its energy to participate in thinking.

To those who believe that a machine can think, we must respond that it would be astonishing if a machine could think, because even the brain does not think!

In your opinion, is reducing a living being to code the principal failing of AI?

Indeed, some AI experts are so dazzled by their own technical achievements – rather like little boys fascinated by their construction games – that they lose sight of the big picture. They fall into the trap of reductionism.

In 1950, the American mathematician and father of cybernetics, Norbert Wiener, wrote in his book, The Human Use of Human Beings, that one day we might be able to “telegraph a man”. Four decades later, the transhumanist idea of  “mind uploading” has been built on the same fantasy – that the whole real world can be reduced to units of information that can be transmitted from one piece of hardware to another.

Taking into account that which cannot be modelled does not lead us to the idea of God, or obscurantism, whatever some may think. The principles of unpredictability and uncertainty can be found in all the exact sciences. That is why the aspiration of transhumanists for total knowledge is part of a perfectly irrational, technophile discourse.  It owes its considerable success to its ability to quench the metaphysical thirst of our contemporaries. Transhumanists dream of a life freed from all uncertainty. Yet in daily life, as in research, we have to contend with uncertainties and randomness.

According to transhumanist theory, we will one day become immortal, thanks to AI.

In our current postmodern turmoil, where we no longer ponder on the relationships between things, where reductionism and individualism dominate, the transhumanist promise takes the place of Plato’s cave. For the Greek philosopher, real life was not to be found in the physical world, but in the world of ideas. For transhumanists, twenty-four centuries later, real life lies not in the body, but in algorithms. For them, the body is just a façade – a set of useful information must be extracted from it, and then we need to get rid of its natural defects. That is how they intend to achieve immortality.

At scientific conferences, I have had the opportunity to meet several members of Singularity University [more a think-tank than a university, based in Silicon Valley in the United States, with an unwritten transhumanist approach] who wore medallions around their necks requesting that, if they died, their heads should be cryopreserved. I see this as the emergence of a new form of conservatism, even though I am the one who comes across as a bioconservative, because I am opposed to the transhumanist philosophy. But when my critics call me a reactionary, they are using the same types of arguments as politicians – who claim to be modernizing or reforming, while eroding the social rights of a country and labelling as conservative, all those who want to defend their rights! 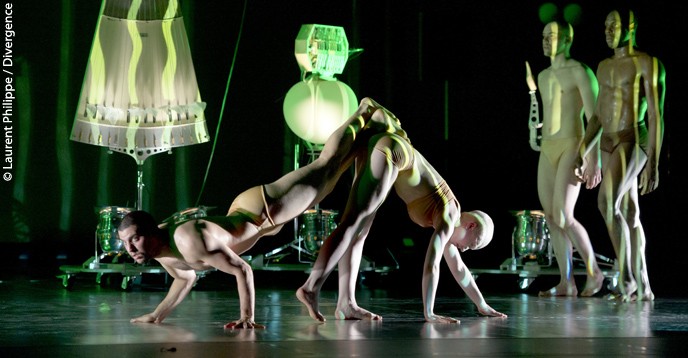 Robot (2013), a performance created for dancers and robots by Spanish-French choreographer, Blanca Li, who takes a questioning look at a world inhabited by humans and machines.

The hybridization of humans and machines is already a reality. That is also a transhumanist ideal.

We have not even begun to understand living beings and hybridization, because biological technology today still omits almost all of life, which cannot be reduced only to those physiochemical processes that can be modelled. Having said this, the living have already been hybridized with the machine, and this will certainly be even more so, with products resulting from new technologies.

There are many machines with which we work, and to which we delegate a number of functions. But are they all necessary? That’s the whole point. I have worked on cochlear implants and the culture of deaf people. There are millions of deaf people who claim their own culture – which is not respected enough – and who refuse to have a cochlear implant because they prefer to express themselves in sign language. Does this innovation, which could crush the culture of deaf people, constitute progress? The answer is not intrinsically obvious.

Above all, we need to ensure that hybridization takes place with respect for life. However, what we are witnessing today is not so much hybridization as the colonization of the living, by machines. Because they externalize their memories, many people no longer remember anything. They have memory problems that are not the result of degenerative pathologies.

Take the case of Global Positioning Systems (GPS), for example. There have been studies on taxi drivers in Paris and London, both labyrinthine cities. While London taxi drivers navigate by orienting themselves, Parisians systematically use their GPSes. After a three-year period, psychological tests showed that the subcortical nuclei responsible for mapping time and space had atrophied in the Parisian sample (atrophies that would certainly be reversible if the person abandoned this practice). They were affected by a form of dyslexia that prevented them from negotiating their way through time and space. That is colonization – the area of the brain is atrophied because its function had been delegated, without being replaced by anything.

What worries you the most?

I am worried about the inordinate success of the logic of innovation. The notion of progress has misfired. It has been replaced by the idea of innovation, which is something quite different – it contains neither a starting point nor an end point, and is neither good nor bad. It must, therefore, be questioned critically. Using a computer word processor is much more powerful than the Olivetti typewriter I used in the 1970s – for me this is progress. But conversely, every smartphone contains dozens of applications and few people ask themselves seriously how many of them they really need. Wisdom consists of keeping a distance from the fascination provoked by entertainment and the effectiveness of new technologies.

Also, in a disoriented society that has lost its great narratives, the transhumanist discourse is very disturbing – it infantilizes humans, and views the promises of technology without scepticism. In the West, technology has always referred to the idea of transcending limits. Already in the seventeenth century, the French philosopher René Descartes, for whom the body was a machine, had imagined the possibility of thought without a body. It is a human temptation to dream that, through science, we will free ourselves of our bodies and their limitations – something that transhumanists believe they will finally achieve.

But the dream of an all-powerful, post-organic man who knows no limits has all kinds of serious consequences for society. It seems to me that it should even be viewed as a mirror image of the rise of religious fundamentalism, which lurks behind the supposed natural values of humans. I see them as two irrational forms of fundamentalism at war.

A philosopher and psychoanalyst, Miguel Benasayag (Argentina) is a former member of Che Guevara’s resistance against Juan Perón’s regime. He succeeded in fleeing Argentina in 1978, after having been  imprisoned and tortured there, and now lives in Paris. His recent publications include Cerveau augmenté, homme diminué (Augmented brain, diminished human, 2016) and La singularité du vivant (The singularity of the living, 2017).