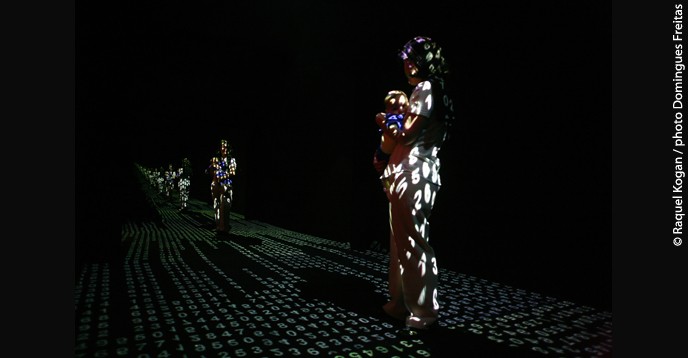 Reflection#2, installation by Brazilian artist Raquel Kogan. Computer-generated numbers are projected in a darkened room, so that the bodies of spectators are directly integrated into the work.

How did the convergence between AI and big data occur?

The rise of AI and big data started in the early 2000s. When Google and Baidu – the emerging search engines at the time – used AI-powered recommendation systems for  advertising, they found that the results were much better than expected. The more data they collected, the better the results would be. But at the time, no one realized that this would be the case in other fields as well.

A real turning point occurred with the emerging of ImageNet, the largest image recognition database in the world, designed for use in visual object recognition software research. Established by computer scientists at Stanford and Princeton universities in the United States, it is considered to be the beginning of the deep learning revolution. The large amount of image data on ImageNet resulted in a ten per cent drop in the rate of mis-recognition. This showed that the convergence of deep learning and big data could help master extremely complex calculations.

How would you define the relationship between deep learning and big data?

If an AI system is designed well, the product will be more convenient to use, more accurate, and therefore, more useful. There will be more users, and hence more data – which in turn, makes the AI system better. A mutually strengthening relationship exists between AI systems and data.

Big data and AI could be merged into a new kind of AI, called data intelligence.

Could you define big data thinking? How could companies adapt to this way of thinking and what changes would they need to make?

The first point of big data thinking is to consciously collect data. In other words, before doing any business, you have to think about how to collect data.

Second, data collection and core algorithms are closely related. You need to know what is missing according to the algorithms, and then collect data with a specific purpose, including data from different sources.

The third requirement is to form a closed loop. The services provided by a software system should be able to stimulate the source to generate more data that can be fed back into the system, forming a closed loop. This allows for a continuous process of self-improvement and self-refinement of the system. A special design is required for the closed loop, which is very different from the previous design used for business.

Could you elaborate further on a closed loop design for AI and big data?

For the closed loop to evolve rapidly, it should be short enough. And it is better not to have people involved in it, because the loop cannot be fully automated with human participation. Second, the update process in the loop should happen frequently – it is best if this happens several times a day, because it keeps updating the system. Third, the process must be continuous, so users are prompted to provide constant feedback. To sum up the process in three words, it should be short, frequent, fast.

In your opinion, how long will it take for this closed loop to actually be achieved?

I think the future development of AI will be divided into two stages. The first stage is that all industries will attempt to use the technology. For example, security and protection services will use facial recognition technology; the banking sector will use AI in risk control, and so on. These are single technologies and solutions serving existing industries.

The second phase will be the emergence of entirely new industries, with artificial intelligence at the core. For example, a bank that uses AI as the core technology can be completely driven by AI in terms of investment, service and credit. Bank clerks would only be required to make small adjustments. Building entirely new kinds of customer service systems would also be possible.

The combination of big data and AI could also threaten the information flow and social equity. How could the normal flow of large-scale data be ensured, without the infringement of personal privacy?

Products that are created by using big data and AI technologies will provide excellent new business models. However, the precondition for these business models to be implemented on a large scale would be to ensure the privacy of their users. Here are three concerns:

‣ First, we need a set of legal and social rules to protect the ownership of data and to make it clear where the data can or cannot be used. In my opinion, the user data should be divided into different divisions. For example, data in the red zone cannot be touched, data in the yellow zone is accessible only to some people, whereas  everyone has access to data in the green zone. There is currently no consensus on the division of data. Besides, there is no law that specifies the definition of the person in charge and the penalties for violating these legal rules.

‣ The second concern is to protect data privacy technically. For example, 4Paradigm (a Beijing-based AI technology and service provider) is currently studying the use of “migration learning” to protect privacy, which is a relatively new field. This could help different companies exchange data. For example, A makes a model, and the model is moved to scene B. Instead of exchanging data directly between A and B, it is included in the model. This is better for the protection of user privacy.

‣ Third, we need to conduct more research on user privacy and data pricing. For example, when users click on an online advertisement through an AI recommendation system, should this system get some of the profits? If a search engine earns revenue, should some of it be distributed to users? These issues are worth exploring.

From a global perspective, what impact will the combination of big data and AI have on developing countries?

I think big data and AI technologies would enable some emerging countries to catch up, or even surpass, traditional developed countries. Because in the future, economic competition will not be only about financial and economic scale, but more importantly, about the size of data and the speed of embracing the data economy. For example, the rapid development of China's internet and mobile internet has allowed for the collection of  a large amount of data. This will also accelerate the development  of China's AI industry, which may change the world balance.

On the other hand, if a country already has a good infrastructure and high-quality education, it could benefit from AI to achieve more efficient production. Just as the use of steam engines allowed some countries to develop more rapidly during the Industrial Revolution.

An international expert in AI and data mining, Yang Qiang (China) is the first Chinese chairman of the International Joint Conferences on Artificial Intelligence (IJCAI), a fellow of the Association for the Advancement of Artificial Intelligence (AAAI), the head of Department of Computer Science and Engineering at the Hong Kong University of Science and Technology, and the co-founder and chief scientist of 4Paradigm.

A journalist and team leader at the AI Studio of NetEase News, Wang Chao (China) covers the AI industry.