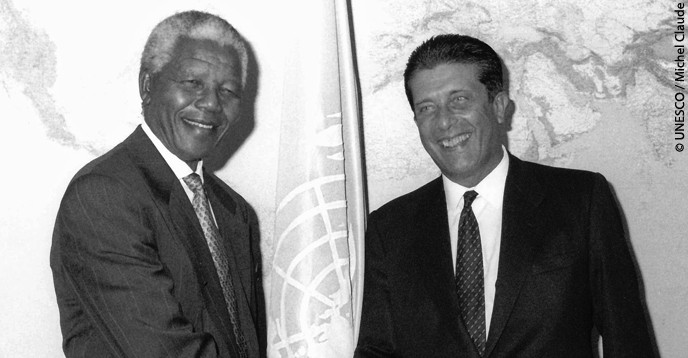 Nelson Mandela, President of the African National Congress and Federico Mayor, Director-General of UNESCO (1987-1999), at the Organization’s Headquarters on 14 October 1993.
© UNESCO

“Apartheid represents today the vilest form of modern slavery. UNESCO's patient but tenacious and vigorous action ties in with the struggle of the South African blacks themselves, who have shown that with the courage of revolt they have discarded fear and regained hope. If the international community is to remain true to itself, it must mobilize and act firmly in order not to disappoint that hope.” This is what Prisoner number 466/64 of Robben Island, Nelson Mandela, read in the Courier, under the very noses of the watchful agents of the police state that was apartheid South Africa.

Nelson Mandela and his fellow political prisoners were condemned to life imprisonment in 1964. Their first years in jail were as intellectually and spiritually barren as the terrain of Robben Island itself – the prison authorities made sure of that. Newspapers, even local ones, were not allowed. "The authorities attempted to impose a complete blackout, they did not want us to learn anything that might raise our morale or reassure us that people on the outside were still thinking about us," Mandela writes in his autobiography, Long Walk to Freedom (1994).

But prisoners could apply to study for high school and university courses and thus order publications necessary for their studies. And so, together with books on subjects such as accounting and economics, the prison administration also allowed in the UNESCO Courier magazine, which, for some time,  arrived regularly from Paris.

The prison authorities, who were mostly, if not exclusively, Afrikaans-speaking, clearly considered the magazine to be harmless reading material for this class of prisoners. After spending the day smashing stones in the limestone quarry, they could retire to their cells in the evening and read the Courier’s "insignificant" contents.

It was President Mandela himself who recounted this in September 1996 to the then Director-General of UNESCO, Federico Mayor, in Union Buildings, the President’s Office in Pretoria, during Mayor’s  official visit to the new democratic South Africa.

The President explained how pleased he and his companions had been to read the Courier, through which they had learnt about so many subjects they had never encountered before – such as cultural diversity and mankind’s common heritage, African history, education for development, and so on. These subjects did not exist in the apartheid lexicon, let alone in the solitary confines of Robben Island.

Reading the Courier was a way of learning about what was happening in the real world outside. Nelson Mandela was keen that UNESCO’s Director-General was informed of this.

I had the privilege of accompanying Frederico Mayor on this visit. As I listened to the President’s words, my mind tried to take in their meaning and significance. The Courier, so aptly named, was the carrier-pigeon that flew regularly from Paris to a remote spot in the middle of nowhere in the southern Atlantic Ocean – bringing news and ideas from the five continents to Mandela and his colleagues, under the very noses of the watchful agents of the police state that was apartheid South Africa. Knowledge and ideas grow wings when necessary.

Robben Island was the South African Alcatraz, an island penitentiary from which there was no escape for the black common-law convicts who were sent there for life. In the 1960s and ‘70s, as the struggle against apartheid strengthened and spread, the island became the place where the racist government sent its most serious political opponents –also for life. In reality, the island was a prison within-a-prison, for the principal jail was mainland South Africa itself. Here, the white minority settler community was locked inside its paranoia about its own racial superiority over the indigenous population. Every aspect of existence, both private and public, was governed by racist laws designed to oppress and denigrate the black majority for the benefit of the white minority population, which was privileged in every way.

In so doing, the ruling class claimed to be preserving and promoting "European values", in keeping with their self-styled "civilizing mission" in Africa. Ironically, they themselves were complete strangers to those values – for they had no understanding of concepts such as liberty, equality, democracy, fraternity, values for which the Europeans themselves had fought, across the centuries.

Indeed, UNESCO and the entire United Nations system were born out of just such a struggle – a decimating war against Nazi racism which had brought the world to the edge of the abyss in the Second World War. In 1945, the lesson was learnt that "never again" would the nations of the world allow such horrors to happen. At UNESCO, these countries decided deliberately to “build the defences of peace in the minds of men” (see UNESCO’s Constitution), by sharing and expanding human knowledge in all its aspects, especially through the areas of education, science and culture.

The apartheid regime, however, learnt a different lesson and chose to go the opposite way – to promote separation, exclusion, deprivation, humiliation and violence. For those citizens who dared to question and challenge this backward ideology, the punishment was banishment for life.

Reading about racism on Robben Island

I see Mandela and his fellow freedom fighters smiling with satisfaction when reading the article on racism written by John Rex, British sociologist and educationist, in 1968: “The most striking instance of racism in the world today is that of the system of Apartheid in South Africa. Apartheid is not as some people may still imagine a serious attempt to provide equal though separate facilities for all races. It is segregation carried through by men with white skins to their own advantage and to the disadvantage of the black and coloured populations.” (The Ubiquitous shadow of racism).

Less than ten years later, the massacre of schoolchildren by heavily-armed police during the Soweto uprising in 1976 was a watershed in the history of the struggle. It brought to the streets an angry younger generation of fighters against apartheid, revolted by the imposition of  Afrikaans as the language of instruction in black schools.

It also made it obvious to the outside world that the racist government had no strategy except the use of brute force, even against unarmed school children. By this time, South Africa had become an international pariah state, shunned by almost all the people of the world, if not by all governments.

In November the following year, the Courier published a special edition on racism in South Africa, Southern Africa at grips with racism, which started with these words: “Apartheid represents today the vilest form of modern slavery. UNESCO's patient but tenacious and vigorous action ties in with the struggle of the South African blacks themselves, who have shown that with the courage of revolt they have discarded fear and regained hope. If the international community is to remain true to itself, it must mobilize and act firmly in order not to disappoint that hope.”

This issue was unlikely to have been allowed on Robben Island, but by then the struggle had reached the world stage and it was beginning to dawn on some of the leaders in Pretoria that they would be needing Mandela – sooner or later. As the years went by, Mandela and his cause grew in strength and stature, while the apartheid regime continued on its path of destruction and violence against its own black population and against neighbouring African states.

Mandela’s long period on the island came to an end in the 1982, when he was brought back to the mainland to Pollsmoor Prison in Cape Town, and then finally to house arrest and to the  relative ‘comfort’ of a cottage in the Victor Verster prison outside the city. During this phase in captivity, which lasted until 1990, Mandela spent hours "talking to the enemy", as he puts it, by initiating dialogue and discussion with the more intelligent, less bigoted members of the regime, in order to make them understand that state violence and military action would not resolve the growing unrest in the country, and that the pressure for change – coming from all sides, including from the international community – would have to be dealt with politically.

Finally, the day which had to come, came.  On 11 February 1990, Mandela walked out of the prison gates, and within days, established himself as the moral leader of the country. A remarkable achievement for a man who was not only banished for nearly three decades, but whose name, photograph and words it was a crime to publish! In May 1994, after four years of gruelling negotiations with the De Klerk government, Mandela was elected the political leader of the new South Africa, the first president of a democratic, non-racist society where the ex-oppressors live in peace with the majority whom they humiliated for centuries.

The twenty-seven years that Mandela spent in prison can been seen in two ways – as a terrible sacrifice of the best years of a man’s life, and a cruel price in absence and loss exacted from his family. This punishment is undeniable and immeasurable. But Mandela’s "10,000 days" behind bars, to use his own expression, can also be viewed on another timescale – this is how long it took for him to convince the racists to free themselves of their own ideological and cultural chains, to accept that freedom and dignity for all South Africans ,whatever their colour or creed, were the ultimate qualifications of a civilized state.

The "white tribesmen" of Africa are lucky that Mandela waited those long years, that he was there to the bitter end in order to lead them, peacefully and patiently, out of the prison gates of their own minds – out of the delusion of separateness and superiority, to a land to which they can all belong and from which none can be expelled because of the colour of his skin.

Robben Island became the first South African national site to join the World Heritage List in 1999. If ever there comes into existence a world heritage list to name those who have expanded and uplifted the collective conscience of mankind, Nelson Mandela will have pride of place on it.

With this article, the Courier marks the 100th birth anniversary of Nelson Mandela, who was  born on 18 July 1918.

Director of the UNESCO Special Programme for South Africa from 1993 to 1996, Annar Cassam is from Tanzania.