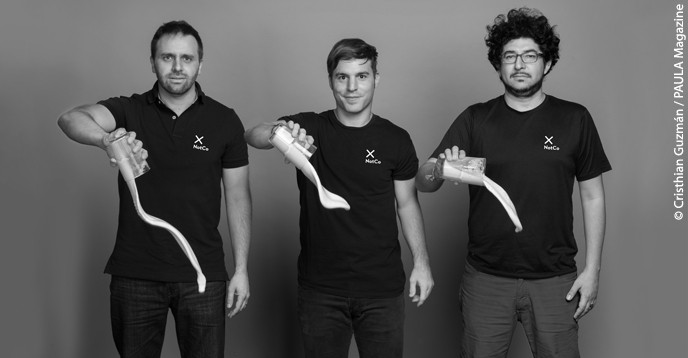 Karim Pichara, Matías Muchnick and Pablo Zamora, founders of The Not Company.

Giuseppe could radically change our eating habits. But this futuristic master chef is only an algorithm! He was created by The Not Company (NotCo), a startup founded in Santiago by three young Chileans in 2015. With the aid of artificial intelligence (AI), they produce substitutes of popular animal-based foods, using only plant-based  ingredients to reconstitute not just the taste, but also the colour, texture and nutrients. For his innovation, Giuseppe was named one of the ten laureates of  Netexplo Innovation 2018.

He was named after Giuseppe Arcimboldo (1527-1593), the Italian Renaissance painter who was famous for his portraits of faces made up of  flowers, fruits, plants and animals. “His paintings tell us that, with intelligence, talent, and lots of fruit and vegetables, we can solve everything,” explains biochemist Pablo Zamora, co-founder of NotCo, along with Matías Muchnick and Karim Pichara.

Our Giuseppe’s passion is not painting, but cooking. To find the right recipe, this intelligent chef searches a database of plants – to identify which foods need to be combined, and in what  proportions – to produce the desired taste and texture of the food being substituted.

“He finds unusual links between plants that he has previously classified at a molecular, nutritional, sensorial and physiochemical level,” explains Zamora, who attended the Netexplo Forum 2018, held in February at UNESCO Headquarters in Paris.

Luckily, Giuseppe is not the only one in the kitchen. He is supported by a team of scientists and chefs who fine-tune the recipes. “He sometimes makes mistakes,” Zamora admits. “He can make milk that tastes perfect, except it’s pink! So the team tells Giuseppe there’s a problem and he reformulates the algorithm to get the right colour.”

Giuseppe never ceases to surprise with his combinations of ingredients, which no human could think up. “For mayonnaise, we use lupines, which, mixed with certain chickpea components, makes an emulsion very close to that of eggs. Mushrooms are used to heighten the sensation of sweetness in chocolate and canary grass seeds to alter the density of certain milks.”

NotCo is on a mission to revolutionize the food industry by crafting and marketing healthy and tasty foods obtained from plants, at an affordable price and produced without harming the environment. According to Zamora, eighty-five per cent of their clients are neither vegan nor vegetarian – they buy NotCo’s cutting-edge products because they like them and because they are healthy and good for the environment. It is indeed the beginning of a new era of food: the idea is to “change the way we make the foods that we love eating, not change the foods we eat.”

The company’s Not Mayo vegetable seasoning that resembles mayonnaise – but without GMOs, lactose, gluten, eggs or soya – is already on the Chilean market. Other products – yogurt, milk, cheese, chocolate and cereals – will be launched soon. NotCo also plans to expand to Argentina, Brazil and Colombia in the near future.

The biochemist is convinced that the application of artificial intelligence to food will contribute to sustainable development. The food industry  needs to transform its production methods, he says, reminding us that 1,500 litres of water are needed to produce a kilo of wheat and ten times that amount to produce a kilo of meat, according to the Food and Agriculture Organization (FAO).

For more information, visit The Not Company