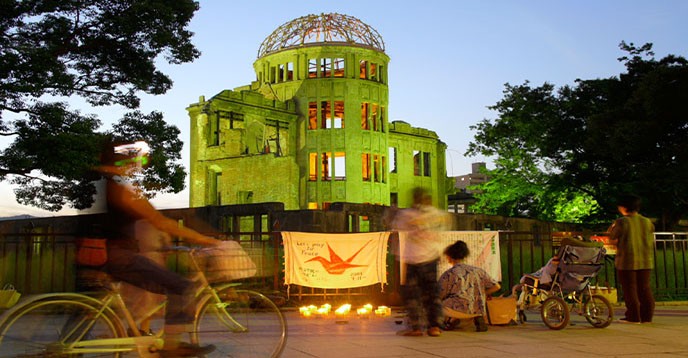 The Genbaku Dome of the Hiroshima Peace Memorial, Japan, preserved in exactly the same state it was found, after being hit by the first atomic bomb on 6 August 1945.
© OUR PLACE The World / Geoff Steven

Global destruction of cultural heritage, now occurring at an unprecedented scale, brings into focus the question of whether or not to reconstruct significant places as a means of recovering their meaning.

The 2001 demolition of the ancient Buddha statues in the Bamiyan Valley in Afghanistan foreshadowed a wave of deliberate desecration of the world’s iconic cultural sites, including Palmyra and Aleppo in Syria. UNESCO calls these attacks on World Heritage Sites a form of cultural cleansing, which require new national and international policies and the involvement of the United Nations, Interpol and the International Criminal Court.

In addition, natural disasters are destroying swathes of buildings, as we have seen during the 2015 earthquake in the Kathmandu Valley, Nepal, where hundreds of structures within the World Heritage Site have been affected.

Reconstruction is not new. Its roots can be found in nineteenth-century Western cultures, when the concept of historical monuments was created and consciousness of a historical past was developed, due to the rapid industrialization of society and its subsequent rupture with the past. Architects sought to replace missing parts of historic monuments as a means of restoring them to their previous splendour. French Gothic Revival architect and theorist Eugène Emmanuel Viollet-le-Duc’s reconstruction of the walls of the historic fortified city of Carcassonne, France, is a case in point. In the twentieth century, this trend was particularly strong in North America, where historical replicas served as living history museums, popular with visitors and effective as forms of presentation and interpretation of the past.

The most famous example of this can be found in colonial Williamsburg, Virginia, where 350 buildings were reconstructed in the 1930s, and others from later periods were destroyed in an attempt to create an interpretative park to eighteenth-century colonial America.

One can even argue that the 1972 World Heritage Convention originated in a UNESCO project: the dismantling and reconstruction of Nubian monuments from Abu Simbel to Philae in Egypt. This outstanding archaeological area, which was to be flooded by the Aswan Dam, was the site 3,000-year-old monuments and temples. These treasures were saved due to an unprecedented twenty-year international campaign launched by UNESCO, from 1960 to 1980.

The question remains: to construct or not to reconstruct. Heritage conservation professionals have traditionally been opposed to reconstruction because this approach can falsify history and create fictional places that never existed in that form. This opposition began in the nineteenth century and gathered momentum following the oft-repeated guidance from French art historian and archaeologist Adolphe Napoléon Didron that “for ancient monuments, it is better to consolidate than repair, better to repair than to restore, better to restore than to reconstruct”.

In 1883, in the Prima Carta del Restauro, Italian architect Camillo Boito spelled out eight principles for heritage conservation that insist on honesty and transparency when adding missing parts to buildings. These ideas eventually found expression in the key twentieth-century doctrinal text that is the foundation of the International Council on Monuments and Sites (ICOMOS). The 1964 International Charter on the Conservation and Restoration of Monuments and Sites, known as the Venice Charter, rules out reconstruction and insists that restoration must stop where conjecture begins. Subsequent standards and guidelines have consistently expressed caution about reconstructing historic sites. There are exceptions – the Australia ICOMOS Charter for the Conservation of Places of Cultural Significance, known as the Burra Charter, adopted in 1979, accepts reconstruction if it reflects a pattern of use or cultural practice that sustains cultural value. But even here, a “cautious approach to changing a place” is advocated.

In the early years, UNESCO’s World Heritage Committee (WHC) followed the ICOMOS doctrine and generally opposed reconstructions. An exception was made in 1980 for the historic centre of Warsaw, whose massive rebuilding was seen as a symbol of the patriotic feeling of the Polish people. Until recently, the Committee has remained largely unsympathetic to reconstructed sites, although there have been other exceptions. For example, the listing of the Old Bridge Area of the Old City of Mostar in Bosnia and Herzegovina, in 2005, was justified on the basis of the restoration of cultural value, an intangible dimension of the property. In the case of the Tombs of Buganda Kings at Kasubi, Uganda, which were destroyed by fire in 2010, the Committee gave provisional approval for reconstruction, on condition that the new structure was based on sound documentation, traditional forms and techniques and continuing use. Indeed, the current version of the World Heritage Committee’s Operational Guidelines for the Implementation of the World Heritage Convention still echoes the Venice Charter when it states: “In relation to authenticity, the reconstruction of archaeological remains or historic buildings or districts is justifiable only in exceptional circumstances. Reconstruction is acceptable only on the basis of complete and detailed documentation and to no extent on conjecture.”

Yet, in light of recent attacks by extremists on heritage places, decisions of the World Heritage Committee and UNESCO reflect a shifting attitude toward reconstruction. The justification for this shift is based in part on the ideas in the Nara Document on Authenticity (which was “conceived in the spirit of the Charter of Venice” in 1994, and adopted by ICOMOS) in which the broadened use of intangible attributes makes a stronger case for reconstruction.

The beginning of this shift can be marked by the wilful destruction in 2012 of the Sufi mausoleums at the Timbuktu World Heritage Site in Mali. Defying appeals from the Director-General of UNESCO and the WHC to spare these revered tombs, extremists attacked them with renewed vengeance until fourteen mausoleums were destroyed. Since that time, UNESCO has spearheaded a reconstruction process, which was completed in record time in 2015. This is a good example when trying to answer the question of “reconstruction: for or against?” It is worth noting that the values listed in the Statement of Outstanding Universal Value focus on the tombs as witness to Timbuktu’s past, with no mention of community values or architectural techniques. It was only after the destruction of the tombs that community and intangible values were evoked. 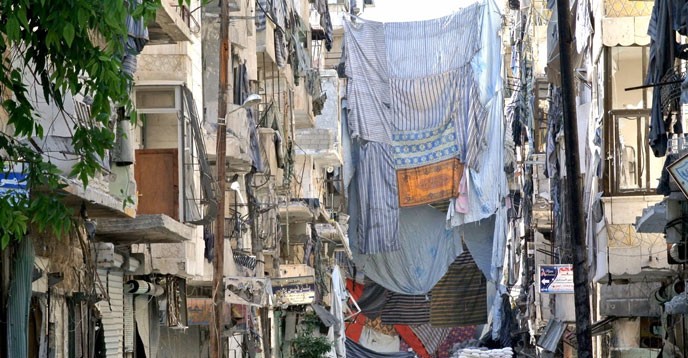 Patchworks of sheets hung over a street to stop bullets from snipers in war-ravaged Aleppo, Syria.

Arguments in favour of reconstruction reside largely in the local community: traditional building techniques are transmitted from elders to a new generation of builders, the project brings together the whole community, and the sites continue to serve as religious spaces for ceremonies and contemplation. Indeed, the involvement of the local community in the reconstruction of the tombs is seen in part as a reconciliation process and a tool for regeneration.

Arguments against reconstruction beyond the rules in the Operational Guidelines document of the WHC include a lack of transparency in the UNESCO decision-making process and concerns that decisions are made outside the local community by professional and governmental organizations. In such cases, it is important to document the decision-making process so that future generations may understand how choices were made, what options were considered, what values remain and what new ones were created. In addition, there is the idea of taking time to reflect after a trauma such as the one in Timbuktu, in the interest of leaving space for further consideration over time and generations. The reconstruction of all the tombs may erase memory over time and may deprive people of the space to reflect on the past. The half-destroyed Genbaku Dome at the Hiroshima Peace Memorial in Japan serves precisely this purpose as a reminder of the most destructive force ever created by humankind.

On the question of reconstruction, the ad hoc decision-making by the WHC appears to be leading to new approaches. The shift represents a challenge for keepers of the conservation doctrine like ICOMOS, because decisions from such a prestigious international body give credence to a different conservation standard. In light of changing circumstances, new guidance is needed. Conservation charters need to make room for new ideas and World Heritage tools need to be updated.

Since the rise of the conservation doctrine in the nineteenth century, each generation has added new principles and guidelines. A materials-based conservation doctrine, as manifested in the World Heritage Operational Guidelines, is still part of our legacy. The Burra Charter makes an important shift towards values-based conservation, focused on heritage and cultural values. The Nara Declaration, with its emphasis on cultural diversity and the relative nature of values, encourages heritage practitioners to interpret the Venice Charter through this new lens. This additive approach is a good starting point for addressing the reconstruction question.

With this article, the UNESCO Courier marks the occasion of the 41st session of the World Heritage Committee, held in Krakow, Poland in July 2017.

Christina Cameron (Canada) is professor and chairholder of the Canada Research Chair on Built Heritage at the School of Architecture, University of Montreal. She has held leadership positions in the heritage field at Parks Canada for more than thirty-five years. Cameron has been actively involved in UNESCO’s World Heritage as Head of the Canadian delegation (1990 to 2008) and as Chairperson (in 1990 and 2008).