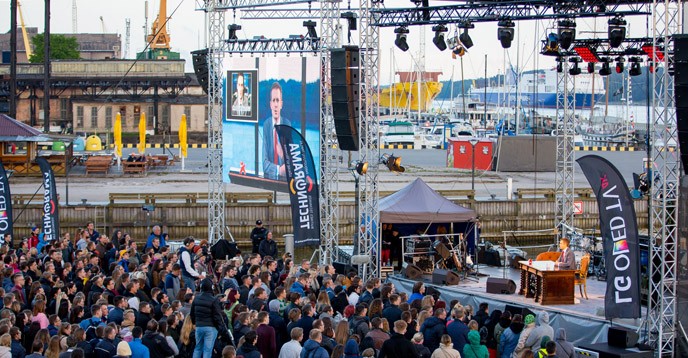 Last recording of the season of “Hang in there!” with Andrius Tapinas, which attracted a live audience of over 2000 (23 May 2017), in Klaipeda, Lithuania’s largest port city.
© Matas Baranauskas

The digital age is upon us, whether we like it not. And if you belong to the media  old guard, it is quite likely you will not like it. Traditional print media and television have been caught off guard – technologically, financially, and creatively – by the digital revolution, and are experiencing the biggest challenges they have ever faced. Are they up to it? Not really. But they have no choice – they can  either sink or swim.

The advent of the internet, nearly thirty years ago, has hooked the world onto  one of the most powerful drugs available to modern societies – free and lightning- fast access to information.

Before they knew what hit them, a second wave — social media — hit the old guard. It was bigger and stronger than the web, and with more severe consequences. Social media companies gained the upper hand as paid subscriptions to newspapers and magazines dwindled, and TV channels started to lag behind the thousands of news websites on the internet.

Suddenly everyone became the media – cameraman, editor, storyteller, journalist, promoter – all rolled in one. The gatekeepers of information saw their gates come crashing down, as they lost the biggest privilege of all – the right to decide what is important and what is not.

The November 2016 election of Donald Trump for the highest office in the United States is the most dramatic example of the all-pervasive nature of social media.  The mainstream media hated him passionately, yet the former kingmakers could do absolutely nothing as he forced them to do his bidding in order not to commit commercial suicide in full sight of their readers and viewers. And so Donald Trump became the first ever US President of Social Media.

Anyone can be a star

At the dawn of the social media era, the old guard dismissed it as a tool for young people. Enter YouTube: the world’s biggest television repository and video-hosting service which creates almost zero content itself, but is the haven for all the wannabes on earth. Anyone, anywhere in the world today, can be whatever they dream of – singers, chefs, boxers, media stars. The sky is the limit and it’s all for free.

Of course, new media is not all positive, and sometimes comes at a heavy price. Fake news, virtual mob lynching, trolls and baseless accusations abound – it’s a free-for-all. There are no filters or editing, and no need to exercise restraint or decency if you choose not to.

We are in the throes of a media transformation, forced by the ascension of the internet. As journalists, we must embrace the revolution, and shed any of our inhibitions to go digital. With our professional qualities, we still have the edge over most of the novices out there today.

The new technologies allow for unprecedented freedom, especially in countries where the press is controlled by the government. Now is the perfect time to voice your opinion, and make it resonate across the globe. Interacting with your audience is critical − instant audience feedback is a potent tool.

The changes in journalism can be viewed as a positive development. It has forced us to be creative, and to invent new business models in order to survive, as in our case.

Propelled by the shock of losing my TV programme on Lithuanian television, I decided to fight back. Liberty TV was founded by me in September 2016. It is a completely independent internet television channel, crowdfunded by viewers.

We broadcast fifteen programmes each month, and add at least three more in the autumn of 2017. The content includes political satire in Lithuanian and Russian, talk shows, investigative journalism, political analysis and positive documentaries.

Our staff (made up of full-time and freelance professionals) includes a full technical crew: from editors to cameramen, journalists and script-writers. A small administrative team also handles communication for the channel. Our flagship programmes are filmed in theatres with high-definition cameras, in front of live audiences of 200 to 250 people.

We are a non-profit, so we have to make sure we balance our books. This calls for austerity. Most of our equipment is rented, or comes with the professionals we hire. Most of our work is done online, and we use a tiny office space for meetings and editing. We plan to relocate to a larger office in autumn 2017.

We reached our financial goal of €15,000 in ten days, just in time for the launch. Almost 5,000 people committed to funding us in the first month. Subscribers are free to pledge their support for whatever duration they choose, with no obligation to continue.  For a nation of less than 3 million people, this was phenomenal. We are also funded by commercial sponsors who are prepared to accept that there will be no strings attached.

Putting myself and my team into the hands of the public was the biggest gamble of my journalistic career. Would they be willing to pay for something they could get for free but would cease to exist if they didn’t pay for it? Are we public-spirited enough to support independent media by contributing to it?  Media experts in Lithuania were sceptical. But we went ahead nevertheless.

In March 2017, we suggested that our viewers use their ability to direct two per cent of their taxes to Liberty TV. We are curious to see how much funding we are able to raise with this initiative.

In four months, Liberty TV became the biggest media entity on Lithuanian YouTube, with some of its programmes reaching six-figure viewership numbers and competing with the most popular shows on mainstream TV. In eight months, media experts started to admit that they had been wrong, and started reporting about our plans to expand.

Our business model is new and falls in line with the digital revolution, but it is not unique. Similar crowdfunded journalistic projects have been launched in Holland, Switzerland, India, and several other countries.

It is not easy; it is the hardest job I have ever done in my career of almost twenty years. But it is the only way I would like to go further as a journalist. And it is the digital revolution that gave me this chance.

Andrius Tapinas is a Lithuanian journalist and writer. He founded Liberty TV in 2016 and is the host of its flagship programme, “Hang in there”. Tapinas is one of the most popular persons on Lithuanian social media, with over 130,000 Facebook followers.