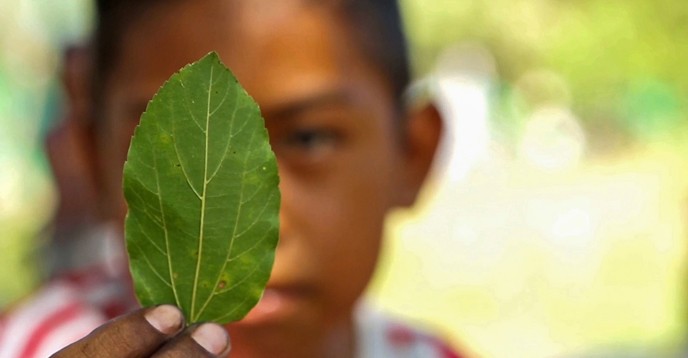 Xákmok Kásek children take part in the collective creation workshop alongside their elders.

Five continents, five years of encounters, tens of thousands of kilometres travelled, and in the end, there is one single conclusion: we are ONE humankind. This is how French photographer and visual artist Bēni sums up the IDENTiTESproject odyssey, which he launched in 2013. It is a multifaceted photographic adventure that is taking him to the four corners of the planet. From Hanoi to La Paz, via Accra, Bēni’s lens captures the faces of the world and brings them together in an impressive series of portraits. “We set off for somewhere else, for something different, for the other, only to end up finding ourselves,” he explains.

Let’s join him in Paraguay, on the Ruta Transchaco, National Route 9, the unique 800- kilometre highway that links the capital, Asunción, with the Bolivian border. It is 2015. IDENTiTESproject#3 is in full swing. The third stage of Bēni’s project is in South America, and it is the first time he is not travelling by himself. He is accompanied by the Laumonier siblings, Marion and Paul, who are assisting him and documenting the journey. After four months of crossing through Chile, Argentina and Uruguay, we find them in a vehicle heading towards “one of the most isolated regions anywhere on earth today”. This is how Marion describes Gran Chaco, the vast arid plain that the country shares with Argentina, Brazil and Bolivia. And for good reason: “We had to drive for fourteen hours before we arrived at our destination,” she emphasizes.

Their destination: the settlement of the Xákmok Kásek. According to the International Work Group for Indigenous Affairs (IWGIA), the Xákmok Kásek (or ‘many little parrots’) are one of the 531 indigenous communities of the Paraguayan Chaco area. They have been progressively ejected from their ancestral lands since the end of the nineteenth century. In 2010, the community consisted of 268 individuals belonging to sixty-six families. On 24 August 2010, after thirty years of legal battles, the Xákmok Kásek won a court case in the Inter-American Court of Human Rights(IACHR), ordering the Paraguayan authorities to return 10,700 hectares of land to the community. Spurred on by this judgement and in spite of the reticence of the state to follow through, the community moved back onto its territory in early 2015.

The IDENTiTESproject cameras were there at exactly the right time to capture the event. “They’d been on the site for less than ten days,” says Marion. It was a moment of great exhilaration − the atmosphere was electrifying. But the return to their ancestral lands has been far from triumphant. “They’ve been living in terrible conditions, sleeping in tents, catching fish for food and drinking from ponds of stagnant water”, she adds. Intensive cattle-farming and soya cultivation have caused often irreversible harm to the soil and the forest. The very identity of the indigenous people is being severely tested – their beliefs, modes of subsistence and cultural practices are all intimately connected to their ancestral lands.

Bēni was in Paraguay at the time, to organize the project’s flagship − a co•creation workshop. It is no accident that he decides to place the land at the centre of the artistic sequence. The end result is a unique moment of sharing, filled with emotion, and deeply spiritual. “The village chief told us that this project has been especially important for the members of his community. Even though they were still very bound to the struggle to regain their land, working with us has given them the opportunity to think about something else, to have some different time together, just for themselves,” explains Marion.

Today, the community has regained possession of 7,901 hectares, or about seventy-three per cent of the lands that are rightfully theirs, according to Oscar Ayala from the NGO, Tierraviva, which represented the Xákmok Kásek at the IACHR in 2010.

At the time this issue of the UNESCO Courier is published, Bēni is travelling across Europe, on the final stage of his project. His round-the-world tour ends in Paris in August 2017, with a special initiative – the project team attempts to create a massive European face in collaboration with several French artists. Each time he returns to France, Bēni also organizes the BACKTO exhibitions, representing the different stages of the project – photographic portraits, co•creation and street- gallery workshops. These ephemeral galleries are mounted in the public space. The profits from these exhibitions and other public awareness-raising initiatives are donated to the local communities featured, to help support their development.

Bēni says he wants to take a break once the European tour is over, “to take a bit of time, maybe a year, off.” But he is already thinking about a book, which, according to him,  “will bring the five continents together and enable us – and especially me − to understand what has been going on since 2013.” He also plans to make a documentary and organize a major exhibition, tracing the entire journey. He already has a title for this, which is the very DNA of the project: “ONE WORLD • ONE PEOPLE”.

This photo essay is published to coincide with the International Day of the World’s Indigenous People, celebrated on 9 August every year.

The photos of the IDENTiTESproject are published under the licence Creative Commons Attribution-NonCommercial-ShareAlike 4.0.