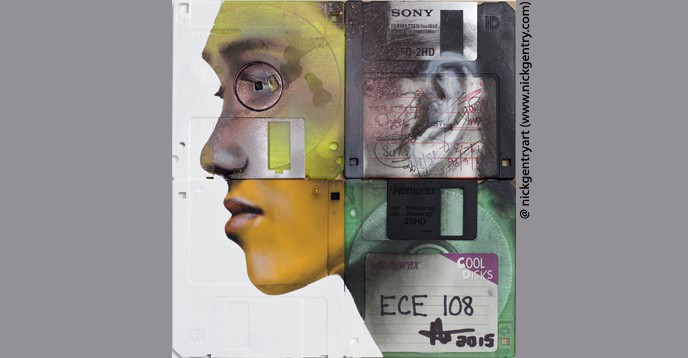 A weakened traditional media, a profusion of information with no guarantee of reliability, blurred boundaries between facts and opinions, faltering professional ethics … journalism is "under fire", to borrow the title of a UNESCO Colloquium held on 23 March 2017. The time has come to question whether the fourth estate is still all-powerful. In recent times, it has lost credibility and struggles to regain the public’s trust.

Technological, economic and political changes over the last decade have contaminated the global media arena. While the polarization of the media is an invaluable tool for democracy, it also promotes the virality of false, rigged, and often toxic, editorial content. So are we being informed or manipulated? Distinguishing between the truth and counter-truth has become increasingly difficult for the general public today.

While fake news looms over real news, the Courier invited journalists and experts from several countries to discuss the problems currently threatening the media, in its Wide Angle section.

To resolve the crisis in journalism, we should start by decontaminating the media field, journalists believe. The media is currently being infiltrated by all kinds of hoaxes, alternative facts and other forms of fake news (see glossary). But the debate surrounding this crisis goes deeper: it highlights the different, often divergent, points of view of the respective and intersecting roles of traditional media and new media technologies; it questions ethos and education. It also focuses on new business models, seeking ways to enable the media to regain its essential counter-power function – to become, once again, the guarantor of a well-functioning democracy.

Journalists and the media across the globe are ready to fight for what they consider to be one of their most fundamental duties: condemning the violation of democratic rights. Sometimes, they pay dearly for this, as the case of Dawit Isaak, recipient of the UNESCO/Guillermo Cano World Press Freedom Prize, demonstrates. His inspiring journey is the main story of our Current Affairs section. This section also includes a debate surrounding the reconstruction of destroyed cultural heritage, to coincides with the 41st World Heritage Committee; a ‘vaccine’ against illiteracy, to celebrate International Literacy Day; and an advocacy for open educational resources, to mark the second World Open Educational Resources Congress.

Our guest for this issue of the Courier is Giuseppina Nicolini, the ‘Lioness of Lampedusa’, who, alongside the NGO SOS Méditerranée, was awarded the Félix Houphouët-Boigny Peace Prize by UNESCO in April 2017. She tells us how the 6,500 inhabitants of  her small Italian island welcomed 25,000 migrants in just two months.

In its Ideas section, the Courier joins the World Humanities Conference, held in Liège (Belgium) from 6 to 12 August 2017. The conference is an opportunity to promote humanitude, a concept that explores openness to the Other − the only possible way out for a disenchanted world. This issue also addresses the role of human sciences today, in the Caribbean in particular, and the role of poetry as a vehicle for conveying knowledge and human values.

“My face, my land” is the title of the photo essay on the IDENTiTES project, published to mark the International Day of the World’s Indigenous Peoples. The Courier invites you to discover the Xákmok Kásek indigenous community of Paraguay in the Zoom section.

Ethical journalism: back in the news
Fake news: sound bites on a burning topic
Developing a critical mind against fake news
Aftenposten versus Facebook: triggering a crucial debate
Saving the media: a crowdfunding story
A beacon, thanks to the internet
Investigative journalism: against the odds
A lexicon for the digital age

Humanitude, or how to quench the thirst for humanity
The importance of homegrown stories
The poet at the heart of society

Dawit Isaak: a symbol of press freedom who must be freed
Reconstruction: changing attitudes
Early literacy: the key to fluency
Sharing legally and freely for better learning
Giving youth a voice!
A new beginning for the UNESCO Courier
Exhibition: countering “everyday” racism