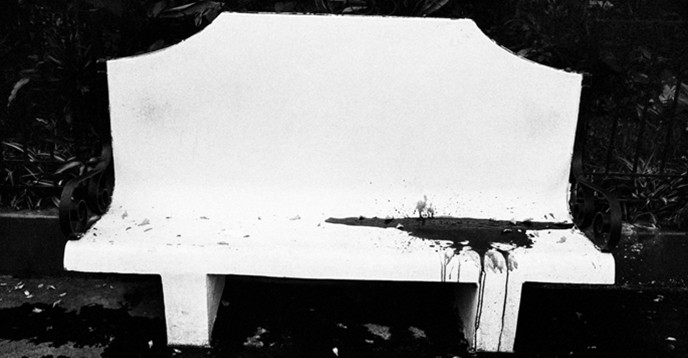 “It is impossible to photograph a subject with objectivity, but it is possible to show a story with truth,” says Juan Carlos, who took this photo of a bench that bears traces of a murder in a public park in Chalchuapa, El Salvador
© Juan Carlos

Some of us were forced into journalism − we had little choice. In 1998, El Salvador was emerging from a long civil war and we were feeling our way forward, with no towering figure to guide us. But we were convinced that the post-war period needed a revitalised press, with a fresh perspective and independent voices. The country deserved a new journalism, and we provided it.

El Faro [The Beacon] was started in May 1998, with absolutely no funding. That’s why we launched it on the internet, at a time when barely two per cent to five per cent of the Salvadorian population had access to it. Our existence depended on new technologies, because we could never have afforded the expense of running a printed newspaper. Opting for the internet turned out to be a very lucky decision for us, given that at the time, we were a million miles away from imagining the influence the web would have on the future of humanity.

In the beginning, we put El Faro together in our spare time. We were gradually joined by young talents who wanted to cut their teeth using this new media. For several years we made zero profit, but we also had virtually no expenses − each of us worked for free, from our homes. This also helped us to forge our independent spirit. When the industry started to take the internet seriously and readers started looking for news online, we were already firmly established on the web.

We compensated for the absence of mentors and teachers by reading, and with healthy doses of self-criticism. Our paper matured as we learned from our mistakes – we constantly reflected on, debated and discussed what we were doing.

Traitors to the nation

As the years went by, we eventually graduated to paid journalistic jobs and a proper office. Many of the journalism students who had worked with us from the start are now co-owners and shareholders of the newspaper. In our nearly twenty years of existence, we have become one of the most respected publications in Latin America.

Most of our efforts are concentrated on investigative and narrative reporting, covering six main themes: violence and organized crime, corruption, war crimes, culture, poverty and inequality, and politics. These are subjects which, in our view, are the least reported. But they are also central to any explanation of why, more than twenty years after the end of the war, El Salvador remains one of the most violent countries in the world, riddled with inequalities and poverty, and largely dependent on the two million Salvadorian expatriates – a third of the population – who send money back home.

The paradox in this profession is that the better you are at it, the fewer friends you keep. We have been called traitors to the nation, protectors of gangs, enemies of private property, and of revolution. In a country polarized between the two extremes that waged the civil war, right-wing governments accuse us of being left wing, and those on the left say we lean to the right. We have received some very unkind messages from drug dealers, war criminals, gang leaders, corrupt politicians, business executives, the army and the police. These threats have forced us to take legal action several times.

These messages of discontent also come from readers sometimes. A few years ago, we published an article that denounced the massacre of young delinquents, carried out in cold blood by the police. Several readers complained that we were hampering the work of the police, because gangs are the main source of violence in El Salvador. We understand these reactions very well, but there is no question of us changing our reporting to satisfy our readers’ aspirations, or alleviate their anxieties − populist journalism would be irresponsible, harmful and immoral.

More recently, we have sought to extend our coverage to neighbouring countries − Honduras and Guatemala − which suffer similar levels of violence, corruption and social decay. Though we haven’t yet achieved the systematic coverage we would like, we have made good progress in setting up a network with journalists in the region, who can collaborate with us on investigative stories.

After two decades of growth, many journalists at El Faro have published books. We also do radio broadcasts, make documentaries and hold exhibitions and conferences. This is because we feel the need to pass on our knowledge to future generations.

In May every year, we hold the Central American Journalism Forum − a week of workshops, conferences and exhibitions with dozens of invited speakers from all over Latin America, the United States and Europe. The best journalists from the region and abroad lead workshops on investigative journalism, radio journalism, photography and reporting. More than a hundred journalists, mainly from Central America, took part in 2017.

The forum is the leading event in our permanent programme of training and conferences, aimed at improving the quality of journalism in Central America. This  is the poorest region of the continent − putting our journalists in touch with their colleagues throughout Latin America opens up new possibilities for collaboration, to cover the issues that increasingly extend beyond the borders of our countries.

A Salvadorian journalist, Carlos Dada founded El Faro in 1998. He has covered events in Iraq, Venezuela, Mexico, Guatemala and Honduras. His articles are published in Latin America, USA, Bosnia and Spain. He was awarded the María Moors Cabot prize by Columbia University, New York, in 2011.