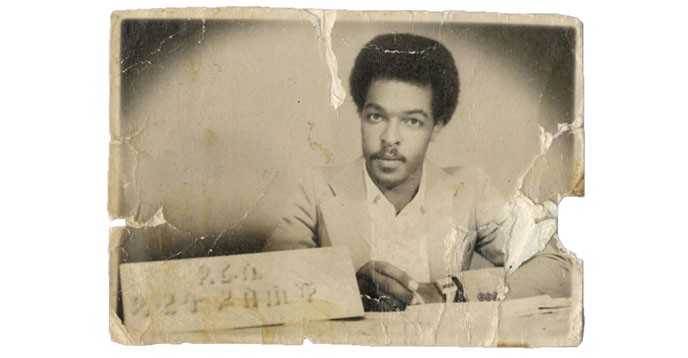 It is nearly sixteen years since the journalist, playwright and author, Dawit Isaak, was imprisoned without trial in his native Eritrea. Isaak, who was awarded the 2017 UNESCO/Guillermo Cano World Press Freedom Prize, has become a household name in Sweden (of which he is a citizen and where his three children and other family members currently reside). A portrait of Isaak from the late 1980s has become an international symbol in the fight for press freedom and the freedom of expression. Isaak has  been named a prisoner of conscience by Amnesty International, which has called for his immediate and unconditional release.

Over the years, diplomatic initiatives by five administrations of his adopted country, international lobbying campaigns, civil-society efforts and celebrity-studded drives, have helped keep Isaak’s case in the spotlight. But the Eritrean regime has neither heeded calls to grant his release nor offered him a fair trial or any contact with the outside world, apart from a brief release from jail in 2005.

Born on 27 October 1964, in the early years of the thirty-year Eritrean War of Independence [September 1961 to May 1991], Isaak grew up in Asmara. His parents ran a small Italian deli, and he was one of five siblings.

When Isaak was in his twenties, the fighting between the Eritrean People’s Liberation Front and the Ethiopian army intensified, and the Soviet Union withdrew its support of the Ethiopian government. Isaak fled the country for Sweden in 1987, where he first made a living as a cleaner.

Isaak stayed committed to fighting for a free and democratic Eritrea, according to his younger brother, Esayas Isaak. “I have few early childhood memories of Dawit since he is 10 years older than me, but when I was a teenager, he was my Tigrinya language teacher here in Sweden. He used to tell me over and over: ‘Don’t forget your language, your country, your roots.’

“Culture and identity were important to him. At the same time, he respected Swedish society and did adjust to life here,” Esayas said.

In 1993, a year after obtaining Swedish citizenship, Isaak returned to a newly independent Eritrea, where he married and had three children — twin brother and sister, Yorun and Betlehem, and their sister Danait, who is 4 years younger.

“One of my earliest memories of my father is him teaching me and my brother to read, and from the age of 4, he taught us math,” says Betlehem Isaak, who is now 23 years old. “He was keen for us to learn about our history and the world around us, though he wasn’t always very pedagogic! But he tried his best. He was a very committed parent.”

By the late 1990s, efforts to liberalize Eritrean society seemed to have paid off. The country issued a new law that permitted the private ownership of print media — a freedom Isaak took advantage of by co-founding Eritrea’s first independent newspaper, Setit, named after the only river in Eritrea that flows all year round. 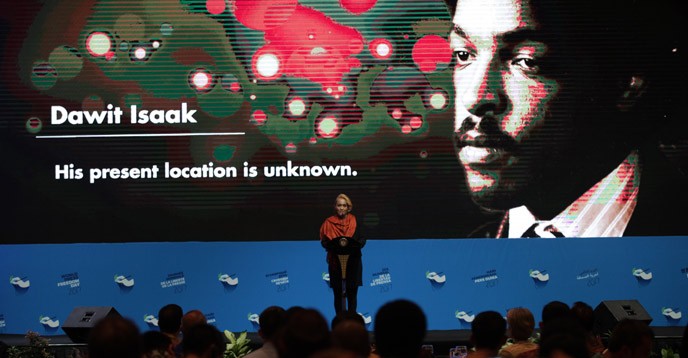 Betlehem Isaak, Dawit’s daughter, at the celebration of World Press Freedom Day in Jakarta, Indonesia, May 2017.

“We wanted our newspaper to flow like a river without interruption,” Aaron Berhane, who co-founded Setit with Isaak, explained.

Isaak became part-owner of Setit and was a prolific columnist, covering culture and local affairs. But it did not take long before fresh clashes broke out between Ethiopia and Eritrea, and Isaak was forced to leave for Sweden — his wife and children soon joined him. Though the political situation remained unstable in Eritrea in 2001, Isaak decided to return home. He stepped straight into a dangerous controversy, as Setit published an open letter to the Eritrean president. A few months later, all independent newspapers were banned — eleven of the letter’s signatories (which included top politicians) and ten journalists, including Isaak, were jailed.

The arrests took place just weeks after the terrorist attacks of 9/11 in the United States. “The world has totally changed since then. He [Dawit] has missed out on so much,” Esayas said. “There are times when I feel like he is about to be forgotten, that there is a sense of fatigue around the efforts to free him. But then, other times, I feel like something just must happen.

“I also have a sense of renewed hope, now that my brother has been awarded UNESCO’s World Press Freedom Prize, which brings attention to his case at the United Nations level,” he added.

“I believe this award sends an important and significant signal against the treatment that Dawit Isaak has been subjected to,” said Cilla Benkö, Director-General and CEO of Swedish Radio and president of the 2017 UNESCO World Press Freedom Prize jury. “He has been imprisoned without any contact with his near and dear ones and with no trial. It is a completely unacceptable state of affairs,” Benkö stressed.

Days before the UNESCO World Press Freedom Prize awards ceremony in Jakarta, Indonesia, which coincided with World Press Freedom Day on 3 May 2017, the African Commission on Human and Peoples’ Rights announced that it would take up Isaak’s case. The move comes after Isaak’s lawyers submitted a petition to the Commission, based on the principle of habeas corpus — a court order that commands an individual or a government who has restrained another to produce the prisoner and justify the prisoner’s detention. While the Eritrean authorities have accepted this principle, they have refused the right to a trial to Isaak and the other journalists detained since September 2001.

The Commission has said it will question Eritrea about the country’s failure to comply with international human rights conventions; a vow that stirred renewed hope for Isaak’s family. But Betlehem dares only to be cautiously optimistic. “It means something, but whether or not it will have any impact is still up to Eritrea. They have the power to decide over my father’s fate,” she said.

Esayas has called the move a “positive development”. “It does send a signal to the international community and to the Eritrean state, which has committed severe assaults on my brother for nearly sixteen years now. I only hope those in power are listening and will do something. 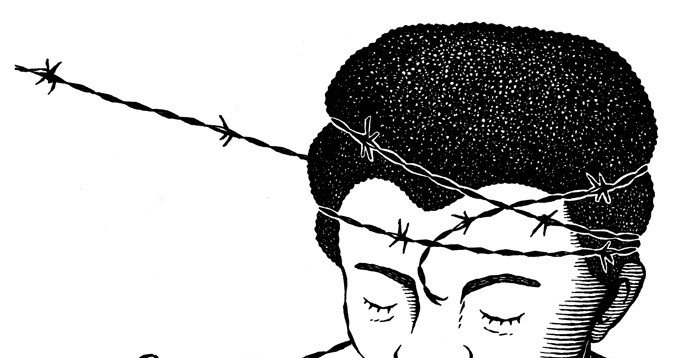 “It took a while for Swedish officials, media and civil society to start paying attention to my brother’s case,” Esayas said.  But eventually, the government at the time engaged in “quiet diplomacy” with Eritrea for his release. A brief ray of hope when Isaak was released in November 2005, was quickly extinguished as he was detained again two days later, on his way to a hospital. Hope was rekindled a few years later, when a former prison guard who had fled Eritrea told Swedish media that Isaak was alive, but unwell and being held in inhumane conditions. Isaak is thought to have spent much of the last sixteen years in solitary confinement, alone in a dark prison cell.

Isaak’s story demonstrates that “we need journalists who hold those in power to account but that, unfortunately, doing so is also increasingly associated with great danger,” Benkö said.

“We should be grateful that there are people out there who are willing to take risks in order to offer the rest of us descriptions of reality that we otherwise would not have access to. Dawit is an example of such a person and there are journalists around the world who offer important guarantees that freedom of expression is upheld…. I am proud that the jury I preside over was unanimous in its decision to award Dawit Isaak the UNESCO World Press Freedom Prize. This prize will contribute to putting pressure on those who are keeping Isaak imprisoned,” Benkö added. 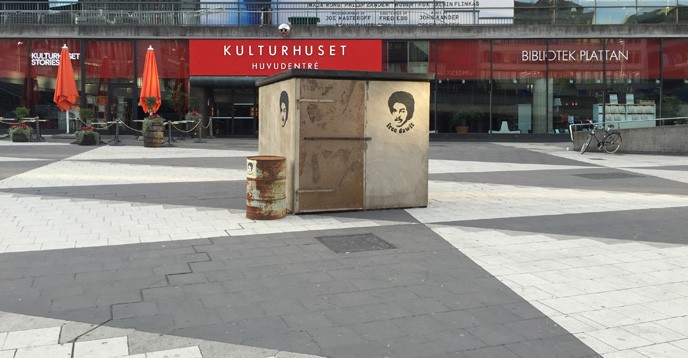 The “Sit with Dawit” event was launched by the “Free Dawit” campaign in 2016, to create engagement in the Isaak case. A mock-up of Dawit’s cell was installed on a number of sites and individuals asked to spend fifteen minutes sitting alone in the dark cell – to reflect upon Dawit’s nearly sixteen  years of solitary confinement must feel like  and show solidarity with him. This photograph was taken on the 5,000th day of Dawit’s detention, on one of Stockholm’s main squares.

Nathalie Rothschild (Sweden) is a producer and reporter at Sveriges Radio, Sweden’s national public radio, and a freelance journalist. Her articles have appeared in international publications, including The Wall Street Journal, The Atlantic, the Guardian, and Foreign Policy.