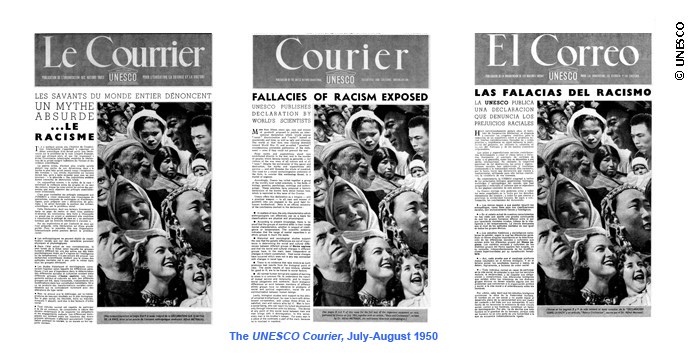 Since its inception in 1948, the impact of this iconic magazine has been far-reaching, enthralling readers across the globe. Covering a vast array of topics, its contributors have included the biggest names in their fields. UNESCO’s actions against racism have been on the top of the agenda since the beginning – the Courier has always provided a powerful platform for debate and discussion of this dangerous and widespread prejudice that continues to blight our world.

UNESCO came into being in the mid-1940s.  Remembering the horrors of the Second World War, the preamble to the Constitution of UNESCO includes a phrase that is both haunting and inspiring: “Since wars begin in the minds of men, it is in the minds of men that the defences of peace must be constructed”.

Richard Hoggart, a British academic who was Assistant Director-General at UNESCO (1971 to 1975), wrote: “The extraordinary assertions within UNESCO’s Constitution – that governments will collectively promote the objective pursuit of knowledge and its free circulation – are redolent of their time.  The world had just come through a terrible and protracted war… The impulse […] that people should understand each other better through improved education and all forms of cultural and scientific exchanges, the passionate emphasis on truth, justice, peace and the importance of the individual – these impulses were almost irresistible”. (Hoggart, R. 1978, An Idea and Its Servants: UNESCO from Within. London, Chatto and Windus, pp.27-29.) And UNESCO aimed very high to achieve these.

UNESCO had a bulletin for official announcements and reports from its inception, but in 1948 it was decided to create the  UNESCO Courier, a popular monthly journal to keep the public informed about UNESCO’s ideals and activities.

In 1949, 40,000 copies of the magazine were produced; this figure rose to 500,000 by the beginning of the 1980s. It was estimated that each copy would be read by more than four people, which meant the Courier had a readership of over two million. You could buy it at newsagents; you could take out a subscription, or you could find it in libraries.

The Courier was never well-known in the United Kingdom or the United States. But if you ask people – especially those in their 50s, brought up elsewhere – it’s astonishing how many of them will say: “Yes, I remember the Courier. We used to get it”, or even, “That’s where I first learned about anthropology”. I myself have heard statements like that from people as far afield as Indonesia, India, Pakistan, Ghana, Brazil, and Jamaica.

The Courier was founded by the remarkable Sandy Koffler. The purpose of the magazine was to have – to use his famous phrase – “A window open on the world”, through which readers could look out onto “the wide global horizons”.

Koffler, an American, graduated from the City College of New York, and was studying at the Sorbonne in Paris when his plans were cut short by the Second World War. Joining the Psychological Warfare Branch of the American army, Koffler’s war experience included landing with the troops of Operation Torch when the Allies invaded Vichy-French North Africa in November 1942. There he started radio broadcasts in Rabat (Morocco) and Algiers (Algeria), before becoming a Voice of America correspondent – a job he held throughout the Italian campaign of 1944-1945.

Whenever an Italian city was liberated, Koffler would set up a newspaper called the Corriere there. It came as no surprise, then, that when he joined UNESCO after the war, he set up, inevitably, the UNESCO Courier. His was an astonishing creative drive mixed with a passion for publishing. Moreover, it was publishing with a clear moral vision attached.

The magazine was intended for an “enlightened” public, in particular teachers and students, and it did indeed get its greatest readership through schools, colleges, and universities.

Koffler set out its principal themes as: the impact of science on human life, racial problems, art and culture, human rights, history and archaeology, cultural differences and conflicts between peoples.

The sheer breadth of the subjects covered is breathtaking. In the same issue, you can discover the threats faced by the temple of Borobudur in Indonesia, by the Sri Ranganathaswamy temple in  Srirangam, India,  and the Parthenon in Greece. In the pages of the Courier, you will marvel at the work of the fifteenth-century Florentine painter Masaccio, and then, the work of the Aborigines of Australia. There is an issue to celebrate Einstein's 70th birthday, another dedicated to Chekhov, and yet another, to Rabindranath Tagore.

There are also numerous articles on ecology and conservation, especially on oceanography and marine biology – the Courier was green avant la lettre, or way before its time.

The articles were notably well-written and beautifully presented. In 1954, the magazine’s format was changed to include colour illustration –  setting new standards at the time.

The range of contributors reads like a check-list of twentieth-century culture. The tradition of excellence established by Sandy Koffler has continued over the years. The Courier’s writers include Jorge Amado, Isaac Asimov, Jorge Luis Borges, Anthony Burgess, Aimé Cesaire, Arthur C. Clarke – to skim just a few names off the top of the alphabet. The magazine also covered major United Nations and UNESCO events. When the Universal Declaration of Human Rights was proclaimed, for example, a Courier edition was devoted to it.

Racism at the top of the agenda

Action against racism was at the top of the UNESCO agenda from the outset. An explicit campaign against South Africa’s apartheid regime led to the criticism that focusing on one country in this way sidelined other human rights issues. The point was well-made. Anyone who looks at the list of nations that officially signed up to the Universal Declaration and inquires about political repression and censorship, the ill-treatment of minorities, the consistent discrimination against women, etc., in some of these countries, would be forgiven a response of enormous cynicism.

Besides, the campaign against apartheid was going on in a world where the British and French empires were still going full tilt, where the Jim Crow laws – that enforced racial segregation – were still a way of life in the southern United States, and where caste divisions in India were still thriving.

The first article in the Courier that directly addressed the question of race was in November 1949: “The question of race and the democratic world” by Arthur Ramos.  A Brazilian psychologist and anthropologist who was head of UNESCO’s Department of Social Sciences, Ramos had been fighting racism all his life, and been imprisoned twice by the Brazilian security police during the dictatorship of Getúlio Vargas.

The article made the case that: “In any discussion on the reorganization of the post-war world, particular account must be taken of anthropology. No other science has been so deflected from its true ends.  In its name, whole nations have resorted to conflict, to defend the false ideal of racial or ethnic supremacy.  It is, therefore, entirely natural that anthropology, restored to its proper place and stripped of the myths in which it had been veiled, should now deliver its scientific message to the world.”

Then, when UNESCO released its “Statement on Race” in 1950, the July-August Courier of that year carried the headline: “Fallacies of Racism Exposed”. The statement was published in full, with the conclusions on the front page.  It was accompanied by an article, “Race and Civilization”, by the Swiss-born Argentinian anthropologist Alfred Métraux.

Métraux, who joined UNESCO in 1947, and was head of the Division for the Study of Race Problems in 1950, played a central role in UNESCO’s anti-racism initiatives. He was the principal coordinator behind the early statements – the first in 1950, and its revision in 1951. He was a close friend of Koffler, and an enthusiastic supporter of the Courier. With more than twenty articles to his name, Métraux was one of the magazine’s top contributors, till his death in 1963.

As seen today, there were some obvious naïvetés in the arguments in the statements on race.  Firstly, there was the enormous confidence in the power of “science” – that anthropology is “scientific”, and would therefore establish conclusions with unassailable certainty. Secondly, some of the examples are clearly debatable – the same July-August 1950 issue carried an illustration, on page 8, accompanying the statement, shows a group of New Zealand Maori above the caption “Racial Harmony”. Did anyone ask the Maori their opinion on that?

Referring to the US, Ramos wrote in the November 1949 issue : “... after many years of vain effort, the policy of protecting the Indians seems to have become more humane and scientific.  Here it is a question not only of protecting the Indians’ “reserves”, but of respecting the characteristics of their civilization, material or otherwise; ...”.  Few Native Americans today would be happy with the words “humane”, “scientific”, and “respecting” as descriptions of the way they are treated.

In the same issue, Ramos praised the work of Brazil’s Serviço de Proteção dos Índios (Indian Protection Service), writing that “the results have been highly encouraging”. The Cintas Largas, the Yanomami, and many other indigenous groups in the Amazon  were to be engulfed in atrocities, and continue to suffer discrimination to this day.

The Courier edition of August-September 1952 featured a report on race relations in Brazil. It heralded a major UNESCO study on race in that country. All the writers argued on the basis of a belief that was common then – that Brazil represented a picture of racial harmony – with one exception.  Luiz de Aguiar Costa Pinto, one of the authors of UNESCO’s 1950 statement on Race, wrote in this issue of the Courier: “…the harmonious integration which is regarded as characteristic of interracial relationships in Brazil fails to correspond to facts revealed by sociological investigations. It has been said so often and for so long that racial prejudices do not exist in Brazil, that this affirmation which has been passed around the world has finally become a source of Brazilian national pride. Yet, behind this piece of dogma lie feelings of bitterness and an obvious uneasiness.”

Because the discussions in the Courier have always been robust and dynamic, the inevitable complacencies and received ideas get shaken up and challenged.

The greatest achievement of UNESCO’s four statements on the race question is the progressive move away from the  “scientific” or “biological” definition of race. They dismantled any scientific justification or basis for racism, and proclaimed that race was not a biological fact of nature, but a dangerous social myth.

Decades later, on the question of race, no one can look at our world with much comfort. But listen to the hope and the intrinsic goodness in Métraux’s words in “Race and Civilization” (Courier, July-August 1950): “There is in this concept of race something implacable. The barbarity of our time is more ruthless and more absurd than that of the so-called Dark Ages; for racial prejudice is an unintelligent and unattractive myth. Its flourishing development in the twentieth century will no doubt in future ages be regarded as one of the most shameful episodes in history.”

The Courier articles on race show a brave, uncompromising campaigning initiative. With a few adjustments, these statements are as appropriate today as they were then. The integrity of the arguments are part of the general strengths of the publication,  not in the least constrained by narrow academic disciplines and protective professional postures. The inspiring, educative, cultural vision offered by the Courier is part of a vigorous moral vision of what human society can be.

With this article, the UNESCO Courier joins the celebration of the International Day for the Elimination of Racial Discrimination, on 21 March.

Alan Tormaid Campbell (United Kingdom) taught Social Anthropology at the University of Edinburgh in Scotland for many years. Since 1974, he has been involved with the Wayapí, an indigenous people who live in the Amazon forest of Northern Brazil.  His best-known book on the Wayapí is Getting to Know Waiwai (1995).