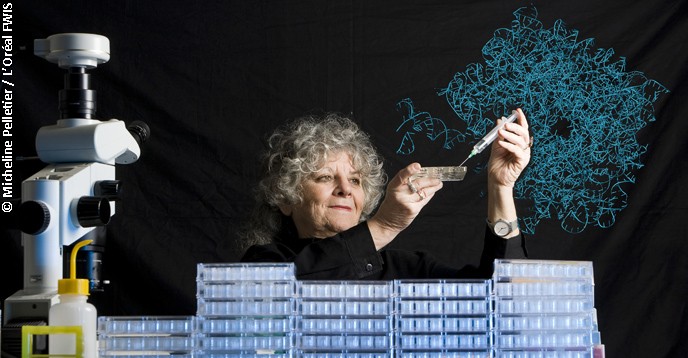 Israeli crystallographer Ada E. Yonath, a 2008 laureate of the L’Oreal-UNESCO For Women in Science Awards, went on to win the Nobel Prize in Chemistry in 2009 for her pioneering discoveries on the structure and function of ribosomes, the protein synthesizers in cells. Her research has also been key to understanding how antibiotics work. In this informal interview, Yonath talks about her life and elaborates on two of her favourite topics − conveying the joy of science to young people, and encouraging drug companies to develop new and better antibiotics.

I was always curious. I wanted to know how the world functions. Among my early experiments is one that I performed at age 5 − it ended with an accident. I wanted to measure the height from the floor to the ceiling in our home. At the time, we were living in Jerusalem in a four-room apartment shared by three families − we were very poor. I went on the balcony, I piled up furniture, a table, chairs, but still didn’t reach the ceiling. I tried to climb on top, but fell into the backyard instead and broke my arm. Fortunately, I continued to be curious, and my scientific ambition survived.

You’ve said your parents always encouraged you to study, but your early years were difficult.

Learning in school or at home was never difficult. The difficulties arose from our deprived economic situation. My secret: I had a perfect memory. Then, not now! I was a very good student. But survival was difficult. My father had a little grocery shop. He died when I was 11. I had a baby sister. We had very little income, so I had to work. I had a million jobs − cleaning floors, washing dishes, giving tuition to younger kids, babysitting, etc. In high school, there was a chemistry lab and one of my jobs was to clean it. There I could perform my own experiments on the side! I used to get up at 5.30 in the morning, and had my first student at 6 a.m.  – I taught mathematics and chemistry. I had long days and very little sleep, but it didn’t bother me.

Do you think these hardships made you more resilient?

Maybe. I was called crazy for years, for pursuing projects other scientists said were impossible, but it hardly disturbed me. What I cared about was seeing modest signs of progress in our work, not convincing other scientists who said there was “no chance”. For me, being a scientist was having a luxurious life. I could ask the questions that interested me, like “how are proteins made within cells?”, and I received a salary for that. It was a beautiful life.

What do you say to young people today, who don’t want to study science?

Whenever I have time, I talk to high school students – in Israel and also around the world, in Spain, Australia, India, Japan. I tell them that, for me, seeing the first structure of the ribosome was an unmatched experience! I also tell them that being a scientist is a joy. It’s fun. You ask a question that really interests you and you work on answering it. This is the best way to work. If you convince funding agencies that your question is important, they will pay you to answer it.

I usually compare the challenge of science to climbing Mount Everest. Getting to the top is fantastic, but the climb is also an adventure.

When I first understood how the ribosome works, it created an overwhelming internal joy. Even more than receiving the Nobel Prize! In addition, I was happy that those who called me crazy or stupid or a dreamer became supporters – because I’m human and it’s nice to be recognized.

Has receiving the Nobel Prize changed your life?

Now I can do something for young people. Before I got the prize, very few young people said they would opt for science, in a poll in Tel Aviv. The day after the Nobel ceremony, a similar street poll showed the number of those interested in science had gone up by forty per cent. Even if only ten per cent of these youth take up science, I will feel I did something good. 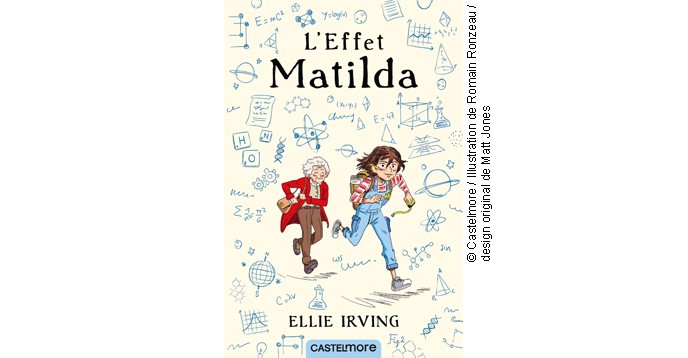 Cover of the book, The Matilda Effect by British novelist Ellie Irving. The name refers to the systematic denial of the contribution of women scientists to research.

Has being a woman made your path more difficult?

I was never a man, so I cannot compare. At the same time, I can say that throughout my scientific career, I have never felt any gender discrimination.

So far, only four women have received Nobel prizes in chemistry. Why do you think this is the case?

There are many more women in physiology and medicine.  I don’t think the Nobel Committee is anti-women − they gave their prize to Marie Curie twice.

There are fewer women in science because society doesn’t encourage women to become scientists − even societies that are supposedly open and liberal. Sentences like: “Don’t try to be clever, you’ll never find a husband”, or “Don’t choose a demanding career, you won’t have a good family life”, are frequently repeated. In some societies it’s said directly, in others indirectly. It’s the same in politics, art, any demanding profession. This is even more so in science because it may imply that the women are cleverer than the men.

At universities, in science, it starts out equal, with fifty per cent male and female students. But this changes later. Some girls may be better students, but they often go to work in somebody else’s lab – either because they want less pressure at work, and are therefore less motivated to become principal investigators, or because they prefer to allocate more time to their families.

What can we do to change women’s attitudes?

It’s not just women. Society has to change its opinions. Education is the way. It’s difficult, it will not happen tomorrow. When I lecture in schools, even if these young people don’t end up studying science themselves, it could make a difference when they have children of their own.

Scientists can have a rewarding life, at home and in the lab. My granddaughter named me Grandma of the Year – one can be a good grandma and a good scientist! When a girl of 15 hears this, it makes an impression; five years later, in university, maybe she will choose science.

Don’t you have to make sacrifices when you make these choices?

Of course, there are sacrifices – science is very demanding, both for men and women. It’s a question of priorities. I didn’t have a policy, I managed things as they came up, every day. I went to do the work I liked, and I also had the family I loved. The important thing is to love both these facets of life.

An interesting example is that of the British crystallographer Kathleen Lonsdale (1903 to 1971), who took ten years off to raise her three children. She worked from home – this was before computers and internet, in the 1930s – documenting the entire mathematical background of crystallography. She wrote three books, which we still use today.

What qualities does it take to be a good scientist?

Also, one has to love, and not be afraid of, a challenge. And to have a critical spirit, to know if what you are doing is important, accurate and original.

Do you have to be competitive? Are you?

It’s possible to not be competitive in science. For example, we started working on the structure of ribosomes in 1980. We got the first indication for crystals after six months. Then the first potential was detected after four years. Two years later, we discovered that the crystals do not survive X-irradiation – the methodology used for diffraction measurement. This led us to install our biggest contribution to life science, called cryo-bio-crystallography. All along, we published exactly what we did.

In 1986, I met a scientist who had been laughing at me for a long time. He said: “We were able to repeat your experiment.” It had been sixteen years since we had started, by then. I almost kissed him! People couldn’t call me a deceiver any more. But he saw it differently: “Why did you publish it so accurately? Weren’t you afraid someone would steal it?” I replied: “The result is what’s important. I always publish correctly.” Competition is not my strong point.

Do you think men are more competitive?

I don’t know, I think everybody’s different. When I talk about challenges, I don’t mean trying to be better than anybody else. It’s to do the best I can in order to solve the problems, and progress towards the goals of the research.

This is also the advice I give to children: don’t compare. Find what you love to do most – it could be economics, or playing the flute, whatever you have passion for – and do your best. 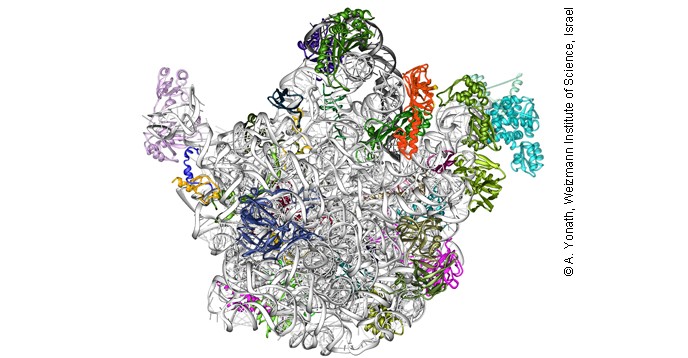 Large ribosomal subunit of the Deinococcus radiodurans bacterium in 3D, studied by the Yonath group at the Weizmann Institute of Science in Tel Aviv (Israel). Ribosomal RNA is shown in grey and ribosomal proteins in other colours.

Are you worried about the increasing threat posed by antibiotic resistance?

I’m very worried about the resistance caused by antibiotics. If you don’t use antibiotics, you don’t have resistance, but you may die from simple infections. We need to develop a new generation of better antibiotics. We are currently developing these. Examining the structure of ribosomes from pathogenic bacteria, we have identified a new type of antibiotic binding sites, which can inhibit protein biosynthesis within cells.

So far, none of these sites are being used by any known antibiotic. Hence, we expect slow-developing resistance. Also, these are specific to pathogenic bacteria, so we expect minimal or no harm to the microbiome, or the “good bacteria” residing in the human body. Additionally,  we can use the chemistry of these new sites to design fully degradable antibiotics, thus preserving the environment from the ecological burden caused by the non-degradable cores of the antibiotics that are currently available. In short, applying our multidisciplinary approach, we expect to optimize the next generation of antibiotics to significantly reduce resistance – while ensuring maximum selectivity, supreme potency, minimal toxicity and appropriate degradability.

We do hope that although antibiotics are considered less profitable, companies will grasp the importance of the resistance problem alongside the new options to reduce it dramatically.

What are you currently working on?

I still work in the lab, on two things – developing the next generation of antibiotics, and understanding the origins of life.

With this article, the UNESCO Courier marks the International Day of Women and Girls in Science, on 11 February.

Ada Yonath (Israel) was born in 1939 in Jerusalem. She earned a Ph.D. from the Weizmann Institute of Science, where she is currently director of the Helen and Milton A. Kimmelman Center for Biomolecular Structure and Assembly. Her numerous international honours and prizes – in addition to the 2009 Nobel Prize in Chemistry (with Venkatraman Ramakrishnan and Thomas A. Steitz) – include the Israel Prize (in 2002), the Wolf Prize (in 2007) and the Albert Einstein World Award for Science (2008).