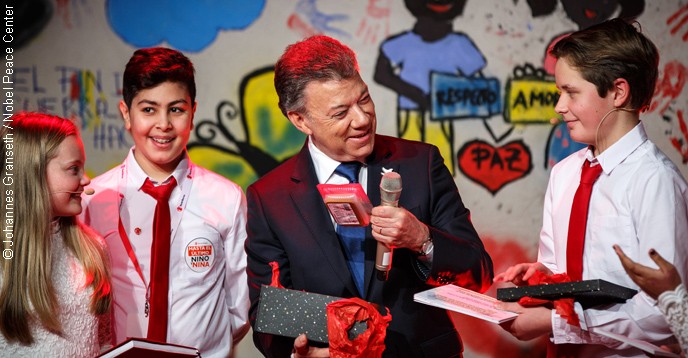 Peace is more than the absence of war. That’s the crucial start of the learning curve for young people. The Nobel Peace Center in Oslo, official showcase for the Nobel Peace Prize, runs its own education programme, teaching peace. More than 10,000 children aged between 6 and 19 visit the Center each year.

Every year, thousands of schoolchildren walk through the doors of a converted railway station overlooking the harbour in the heart of Oslo, Norway’s capital, in search of one elusive thing – peace.

Through its events, the Center aims to foster reflection and engagement on topics related to war, peace and conflict resolution. Since it opened in 2005, it has welcomed over 1.6 million visitors to its more than sixty permanent and temporary exhibitions – including twelve about the Peace Prize, and exhibitions about the laureates and other world leaders.

Alongside that work, the Center runs an education programme aimed at opening young minds to the concept of peace, how it is defined and cultivated. More than 10,000 children aged between 6 and 19 from Norway, Europe and further afield, visit the Center each year.

A team of four trained educators run ten programmes a year, devised for children, families and older students. Any school or individual can sign up for hour-long training sessions and other activities including talks and films, all covering topics at the core of the history of the Nobel Peace Prize – such as conflict resolution and human rights.

Defining peace is not easy

Our first task with the children is to explore the concept of peace. Everyone knows they want peace, but it is not that simple to talk about or teach. When we start to define it, most students say at first that peace is the absence of war.

We also ask the students about their views on what promotes peace. This enables us to more fully explore topics such as human rights, how countries and groups can work together, and respect between people. The purpose of these questions is to provoke them into understanding that peace is a positive rather than a negative.

At the Center, we believe the goal of our work is for students to acquire knowledge and values that can be transformed into actions that benefit them personally, and their communities. To nurture conscious, tolerant, empathetic citizens, the foundation must be democracy, human rights and conflict resolution.

Starting with the basics

"Democracy has to be born anew every generation, and education is its midwife," wrote John Dewey in The School and Society. The American philosopher, psychologist and educational reformer (1859-1952) believed in teaching children through problem-solving rather than by learning facts by rote. We try to use the same approach.

When we talk about human rights, we start with basics, like asking students if they feel they are heard when they express opinions.  From this, it is a small step to talking about others who have not been allowed to talk freely – like Nobel laureates Nelson Mandela and the German pacifist Carl von Ossietzky, for example. We then discuss the responsibility that follows from basic human rights.

We adapt our methods to the age and ability of our students. We know, for example, that role-play works very well when the youngest students are being taught the importance of children’s rights. We challenge older students to take a stand in difficult cases based on true-life dilemmas. Above all, we try to ensure that the sessions are relevant and help build critical thinking. 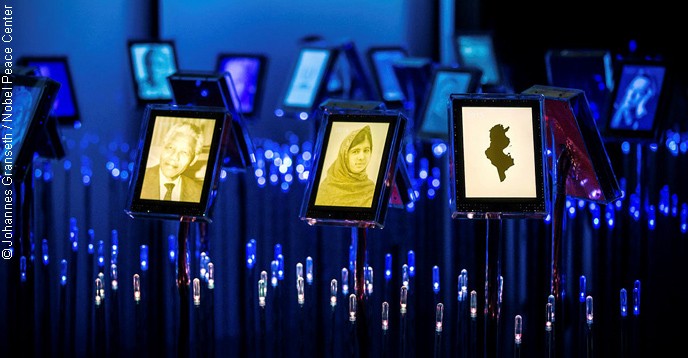 The Nobel Field, designed by American artist David Small, is often called the heart of the Nobel Peace Center.

A directed discussion with open-ended questions can strengthen the students’ empathetic abilities. What is racism? What happens inside a person repeatedly exposed to racism? What are the consequences of racism? In group discussions, students learn how to articulate their opinions and expand their theoretical vocabulary. We draw on their personal  experiences to reinforce the universal aspect of human rights and create a safe framework for them to share, and to try out standpoints with each other.

Our programmes also make use of our archive and the laureates’ work, as powerful concrete examples of actions for peace. This may include the Austrian novelist and pacifist Bertha von Suttner (the first woman to be solely awarded the Nobel Peace Prize in 1905), for her persistent efforts in  the international peace movement; American activist Martin Luther King, Jr.’s (awarded in 1964) use of non-violent methods to further the Civil Rights movement, or Iranian human rights lawyer Shirin Ebadi’s (awarded in 2003) audacious work to achieve universal human rights.

To follow up, we highly recommend that teachers take the conversation started at the Center back to the classroom. We provide follow-up tasks on our website, to support practice and knowledge-deepening activities. We often receive very positive feedback from teachers about the way in which the visit has stimulated thought and debate among their students.

Toril Rokseth (Norway) is Director of Education at the Nobel Peace Center, where she leads a team of four educators.