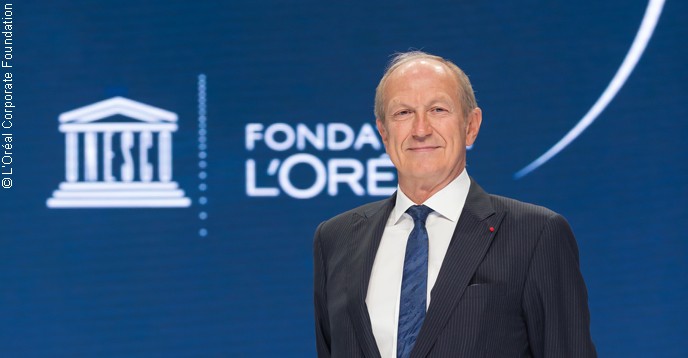 This year is the twentieth anniversary of the L'Oréal-UNESCO For Women in Science programme. How would you define the partnership between L’Oréal and UNESCO?

L’Oréal’s partnership with UNESCO is unique. In 1998, when we launched the L’Oréal-UNESCO For Women in Science programme, our ambition was to promote women scientists by launching a prize for scientific excellence that is reserved for talented women. In order to do this, we were looking for a partner that shares this ambitious vision of a science – and a society – which is more inclusive. Partnering with UNESCO became an obvious choice, as we share the same humanist and universal values. After twenty years of collaboration, our programme has expanded to a magnificent scale. Not only do we award an annual prize to five eminent women scientists, each representing one of the five continents, but we also give awards to young researchers in 115 countries.

Through these initiatives, in twenty years we have jointly supported over 2,700 women. UNESCO is a valued partner for making the programme truly international. And the L’Oréal Foundation puts its skills and know-how behind this great cause to support women researchers through every stage of their career − bringing them into the public eye and emphasizing the importance of a better representation of women in scientific vocations if we are to solve the great challenges of our time.

Why is it important to promote women scientists?

The world has never been so changeable and uncertain. We are undergoing a veritable technological, social and environmental revolution, and are being confronted with challenges we have never faced before. How could we deprive ourselves of the scientific skills of half the world’s talent? How could we shape an inclusive world without women? We need to make use of all the talent available – obviously including women – if we are to address the challenges and the extraordinary complexity of our times. Yet, women continue to be under-represented in the world of science, where the glass ceiling remains a sad reality. Only about 30 per cent of researchers are women and three per cent of Nobel prizes in the sciences have been awarded to women since the prizes were established – none in 2017. At L’Oréal, both in our company and in our Foundation, it is impossible to imagine a world without the contribution of women.

How can the L’Oréal-UNESCO For Women in Science programme further the cause of women scientists?

For the past twenty years, the L’Oréal-UNESCO For Women in Science programme has been using the recognition and promotion of women in science to demonstrate by example that they have a full role to play in scientific institutions.

This is particularly important. The promotion of women who serve as role models for others is fundamental to encouraging and supporting young women in scientific careers.

But when we look at the figures, it is obvious that this is not enough. Over the past ten years, the share of women in research has, it is true, risen by about twelve per cent. Women are increasingly following a career in science and represent about half of those enrolled in the first years of university. But they are still largely excluded from higher positions – only eleven per cent of senior academic posts are held by women, according to the UNESCO Science Report: Towards 2030, published in 2015.

Even if there is no doubt that our programme has helped to raise awareness and mobilized the scientific community, we obviously have to go even further. We have to work with the entire ecosystem − in other words, with the institutions and public authorities, as well as with men. One of the great merits of the L’Oréal-UNESCO For Women in Science programme is that it is far from being only a women’s cause being fought by women. It also allows women to help shape an inclusive world − a prerequisite for fair and balanced societies for all, able to respond to the challenges of today’s world.

For Women in Science, a partnership between UNESCO and L’Oréal