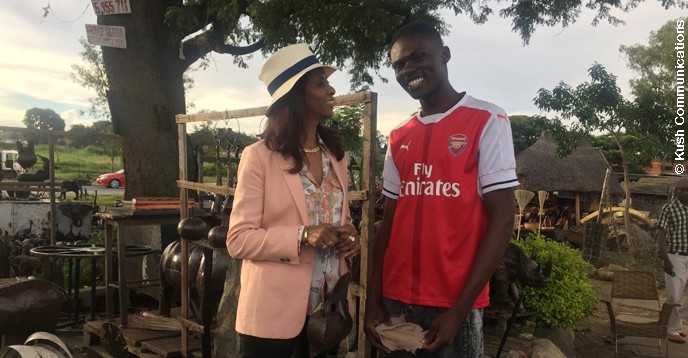 Zeinab Badawi in Harare, Zimbabwe, during the shooting of the BBC’s History of Africa series, broadcast in July and August 2017. She is talking to the sculptor, Alan Adam.

The British-Sudanese television personality – who transformed UNESCO’s General History of Africa into a nine-part series for the BBC, making this treasure-trove accessible to thousands – terms it her “most valuable project” yet. This broadcasting project is unique because it systematically explores Africa’s history from prehistoric times to the modern era – specifically targeting young people and Africans.

Besides elaborating on what it took to make this ground-breaking series, Badawi also discusses the continuing gender hierarchies in the media, and the difficulties professional women encounter when aiming for a work-life balance.

Your nine-part series on the History of Africa has been broadcast on BBC World News TV in July and August 2017. What inspired you to do it?

Africa has a long, rich and complex history. Yet that history is neglected and overlooked, and what we are presented with often projects a distorted and partial picture. This has always troubled me. When I discovered, several years ago, the General History of Africa (GHA) published by UNESCO, I was delighted.  Thousands and thousands of pages on Africa’s history from the beginning of time to the modern era, written mainly by African scholars. And yet I'd only vaguely heard of it.

The thought struck me that surely the General History of Africa is one of UNESCO's best-kept secrets! This was the starting point of the project.

I have been in the media for more than twenty-five years and I have done all sorts of things, but I can honestly say – hand on my heart – that this project is by far the most exciting, the most interesting and the most valuable project I have ever been involved in.

It is a legacy project and a unique project, because never before in the history of broadcasting, have we had a systematic look from prehistory to the modern era of Africa’s history – told, I hope, in a compelling way – particularly targeting young people and particularly targeting Africans. I really hope that after they see this, they will have a very clear idea of how wonderful their continent is, regardless of which part of it they come from.

How do you plan to make the series accessible to as many people as possible? Is it available on the web?

The series will be made available to all African and Caribbean state television stations and in Brazil – hopefully in several languages – as soon as we have managed to translate and put subtitles on the episodes. There is a big cost implication to doing this and it will also take time. The series is not available on the web, but it may be in future. It will be shown again in 2018, on BBC World TV.  We are also exploring other options for its dissemination.

General History of Africa is an academic publication. How did you make it appealing for a wide, general audience?

I am a television personality. I have been in television for a long time, and I am very keen to make sure that this series is grounded in proper scholarship. Which it is, but it also has to be visually enticing. So it is not an illustrated lecture. I am very keen on making sure that young people watch it. It is no use making programmes which tick the right boxes if nobody watches them.

I tried to make it fun and accessible and visually very colourful. For example, if I am talking about the trans-Sahara trade, I'll find a camel market, I'll jump on the camel, I'll fall off the camel – yes, I did! And I’m not very proud of that… when I think that my great-grandfather was a camel trader.

The key thing that I am very sure about is that this project is the history of the African people – and not about stones and bones and monuments.

Of course, we show monuments where it is relevant, but we want to tell the history of the people. Everywhere we went, I was trying to find characters who are mentioned in the GHA and to put them at the front of the narrative. It might be the Aksumite King Ashama; it might be the Berber king Juba II, who married the daughter of Mark Antony and Cleopatra; it might be the Sudanese King Piye of Kush, who ruled Egypt in the eighth century BC. So this is my approach: to always start with a narrative that involves the people.

How were the local communities involved in this project?

I used local camera crews in each country. It is extremely hard work, and they were exhausted, but they were all thankful, because they were listening to the interviews, they were looking at the places, and they were learning about their country. Some of them said, at the end of it: “I had no idea there was so much in my country”.

What were the major difficulties you encountered during the shooting?

One of the problems was to get archival material from the national TV stations. They were all willing to collaborate, but in the end, you never get anything. Also, there was a question of language. I work in English, but most people in Western Africa speak French. In Northern Africa, they speak mostly Arabic. Fortunately, my Arabic is better than my French.

I would say the main problem was the lack of female interviewees. The vast majority of the experts are men. So, where possible, I tried to speak to women, in order to address the imbalance. 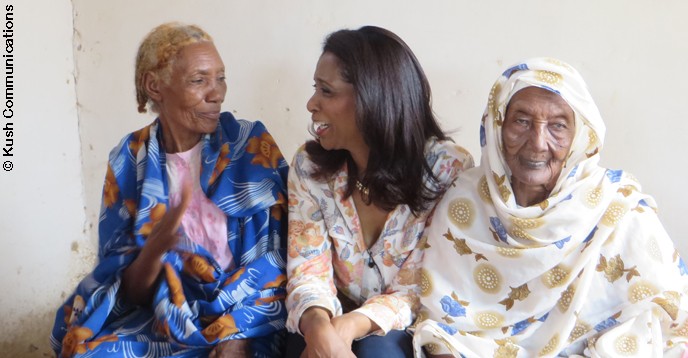 Badawi relaxes with two women who are residents of a village at the foot of the Jebel Barkal mountain, during a shoot in Sudan.

How do you see the gender issue in the media landscape today?

There are several aspects to the gender issue in the media. The female on-screen presence – the kind of role that I have, for example; female expert opinion that is also sought, when the women are interviewees; women in positions of real power in media organizations, behind the scenes; and the way gender issues are covered in the media.

In terms of women’s presence in the field, and on the screen, I think that it has improved, but the senior roles are still predominantly male.

All over the world, including in the United Kingdom, the number of professors who are women is small compared to men. It means that when you want to go and seek experts' opinions, they are more likely to be male.

In terms of women in positions of power, regardless if it is a Western, African or Asian nation, the picture is not particularly optimistic. Major Western organizations remain very much controlled by men. The BBC, certainly. You find women in middle and lower levels of management, but the high level is still very male-dominated.

When it comes to gender issues, and how these are covered, that is sometimes done in a slightly superficial way – especially in countries where the assumptions, the prejudices on gender issues, are deeply rooted.

You moderated a Leader's Forum at UNESCO in 2011, where you said that girls' education was your "family business". Could you explain why?

In a sense, yes, it is. I was referring to my great-grandfather Sheikh Babiker, who pioneered girls’ education in Sudan at the turn of the twentieth century, when the country was under British rule. At that time, girls were not educated but my great-grandfather wanted to change this, and he started with his own daughters. Despite the hostility from the British authorities and the Sudanese community, he established a school for his children in his own house.

He had many children actually. We make jokes about him in the family: we say that he was so pro-women that he married four of them!

More seriously, he was indeed a great visionary. He set an example by making sure that his own daughters were educated, and then they developed schools. I grew up with aunts, who are now in their eighties, with Ph.D.s from Western universities. Presently, one of my uncles runs the Al-Ahfad University for Women in Khartoum, where girls from Sudan, but also from other parts of Africa and the Arab world, are educated.

So, when people say that Muslim girls cannot be educated because it is inconsistent with the values of that religion, I am simply astonished!

Your work is time-consuming. How do you balance work and family?

It is hard for women as mothers to have careers. We are the ones who give birth to children, and whatever our profession is, that means that there are some interruptions to our work. So you have got to do what works best for you. But if you opt for a longer interruption to your career – maybe three, four, five, ten years – in order to look after the children, you do pay the consequences for that. It could mean you are out of the frame and you have to reclimb the ladder, while others have gone beyond.

Have you experienced this?

Probably. I was lucky because my work is studio-based, but I had some interruptions to my work, because I have four children. It is a lot! Had I been childless, I would have probably had two or three more years to add to my career – who knows.

You often say that you have a hyphenated identity. Could you elaborate on this?

Today, everybody is a bit of something in Europe, but when you have a badge of colour, your multiple identity is more evident than if you don’t. I was born in Sudan, and moved to the UK when I was 2 years old. At that time, there were fewer people from Africa or Asia living in Europe. There are many more now. I think that it is really less of an issue than it was.

Obviously, I am of a Muslim background, but Muslims are a part of the European landscape. And I do think that when we refer to Muslims in Europe, we should say "Muslim Britons", for example, instead of saying "British Muslims". I would switch the name and the adjective, like the Americans do. They say "Muslim Americans". The difference looks slight, but actually it speaks a lot more. It is quite profound and it is important to the mindset.

I see my hyphenated identity as an advantage that gives me a first-hand experience of both non-Western and European culture. I don’t see any inherent conflict. I just have the feeling that I have the best of both worlds!

The History of Africa with Zeinab Badawi

Discover the Courier's issues on women

Zeinab Badawi was born in Sudan and moved to London at the age of 2. A prominent broadcast journalist, she  studied at Oxford University and the University of London. She was awarded an honorary doctorate by the School of Oriental and African Studies (SOAS),  University of London in 2011, for her services to international broadcasting.

Badawi has extensive experience in television and radio, working on a range of programmes. She is best known for Hard Talk for the BBC, the hard-hitting programme which features the world’s leading newsmakers. She also presents Global Questions and World Debates on BBC World TV, featured on both BBC radio and television.

She is the current Chair of the Royal African Society, a patron of  BBC Media Action (the charitable arm of the BBC), a Vice-President of the United Nations Association UK, and a board member of the African Union Foundation. She is also a member of the World Economic Forum's Global Agenda Council.

Through Kush Communications, her own production company, Badawi has produced and presented many programmes, including the definitive TV series of African history, in partnership with UNESCO.