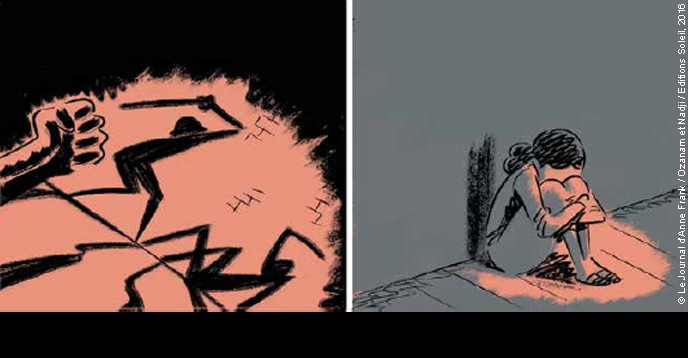 From the Diary of Anne Frank, a comic book written by Antoine Ozanam and illustrated by Nadji Scelsi, (Editions Soleil, 2016).

Over the course of history, anti-Semitism has continued to raise its ugly head. It first emerged under religious pretexts in the Middle Ages, then appeared as nationalism from the nineteenth century onwards, before assuming a scientific claim in Nazi ideology. Since the end of the Second World War, it has reappeared, in the guise of anti-Zionism. History urges us to be vigilant. Robert Badinter draws lessons from it that are rich with meaning − and warnings.

Anti-Semitism is not a contemporary phenomenon. It is a centuries-old evil. Since the capture of Jerusalem by Titus in 70 AD, since the dispersal of the Jews, mainly throughout the Mediterranean basin, when they were sold as slaves in such large numbers that market prices (to use a modern economic term) plummeted in the Roman Empire − the condition of the Jews for two millennia, especially in Europe, has never ceased to involve exclusion, suffering, and persecution.

Since that distant Roman period, I would say we know of three forms of anti-Semitism, which sometimes merge.

From religious to nationalist and racial anti-Semitism

The first form of anti-Semitism is religious. Since Constantine’s Edict of Milan recognizing Christianity as an official religion in 313, anti-Semitism has always nourished itself on the hatred of the “Jewish deicide”, those who killed Jesus Christ. Throughout the periods of persecution and massacres, the possibility was sometimes – though not always – offered to Jews to escape death or exile by forced conversion, even if they became Jews again when times were less cruel. The long, culturally rich history of the Marranos, particularly in the Iberian states, is an illustration of this.

With the birth of modern nations, anti-Semitism became essentially nationalist. The Jews, even when they were natives of the countries in which they lived, were always foreigners who were suspect. The fact that the Jews had quite naturally assumed responsibilities, despite the ostracism inflicted on them, and that they held eminent positions in political, economic and financial spheres, made them, at the slightest national crisis, potential traitors − always in the service of a mythical   “international Jewish conspiracy” imagined by the anti-Semites.

This was particularly the case in France. I do not need to recall the significance of the Dreyfus affair (a political scandal and notable example of a miscarriage of justice, 1894 to 1906) in this respect. Because if we had been looking at things with lucidity for a moment, there was no reason why Alfred Dreyfus − a wealthy Alsatian Jew who hated Germany and wanted, first of all, to serve France – should be a traitor.

By the end of the nineteenth century, minds had evolved. Anti-Semitism strove to be scientific in the image of the modern disciplines. It became racial: the Jews being defined as a “race” of mysterious eastern origin that could not be assimilated by the peoples among whom they settled – especially those who claimed to belong to a superior Aryan race, who felt threatened with degeneration by the presence of Jews, with their numerous flaws, in their midst.

Thus, in the form of prohibitions, consignment to ghettos, markings on clothing – as if they were dangerous animals – Jews appear, in the long history of humanity, as an accursed species. Hence, the extreme importance we must attach to the French Revolution, which for the first time in history, in 1791, proclaimed that Jews living in France would be considered full French citizens.

A little anecdote: on the day the citizenship of the Jews was voted on, at the end of the Constituent Assembly, the Dauphine, sister of Louis XVI, wrote these words to a cousin of the royal Austrian Hapsburg family in Vienna: “The Assembly has reached the height of its folly, it has made the Jews citizens.”

If I stress this point, it is because the desire to make Jews full citizens, attained with difficulty in the parliamentary proceedings, is exactly what the Nazis hated the most – namely, human rights and the philosophy of the Age of Enlightenment. As stated in Adolf Hitler’s Mein Kampf, the Jews must be excluded absolutely from the community of the German people. This rabid anti-Semitism is at the origin of the racial laws of the Third Reich, adopted in Nuremberg in 1935, the purpose of which, I would remind you, was “the protection of German blood and German honour” − supposedly defiled by the presence of the Jews.

I leave aside the impossibility that the racial theory has encountered, of finding scientific criteria. The scholars of the Third Reich sought hard and, of course, found nothing. And so they fell back on religious practice.

The criteria adopted by the Nuremberg laws forbade any possibility for Jews to leave, through any kind of conversion, the herd of these evil beings to which they belonged by birth.

A wealth of significant lessons and warnings

I will not repeat here the long list of increasing persecutions suffered by the Jews − first in the Third Reich and then in the territories occupied by the German army. Today, countless studies have unveiled the scope and the horror of the Jewish genocide by the Nazis. Nor will I return to the remarkable historical and philosophical works which have dealt with this phenomenon.

What I would like to emphasize is this, which seems to me the most significant and cautionary lesson: what is quite remarkable and difficult to understand is that a great Christian people – cultivated among all the peoples of Europe, from which emerged numerous geniuses of art, thought and scientific research – was the bearer, organizer and perpetrator of the most terrible persecutions against the Jews that have ever blighted the history of Europe. It is essential to remember this, for in Europe there were no countries where the love of culture, the passion for art, especially music, and scientific research, were held higher than in Germany, at the end of the Weimar Republic.

This is precisely UNESCO’s opportunity for reflection. Because if there was one country that shone by its philosophy, it was Germany − Germany before Hitler. And it is this country – yielding to every fury of anti-Semitism and racism – that orchestrated the cruellest episodes the Jews have ever known.

The lesson – and that is why I am insisting – is that culture, knowledge, and a love of the arts are not enough to constitute insurmountable ramparts against anti-Semitism, since it was here that it established itself with the most terrible horror.

Let me be understood clearly: in no way do I mean that we – disciples of the Enlightenment, who believe, throughout every ordeal, in the progress of humanity through the benefits of enlightened education and just institutions based on the philosophy of human rights – must renounce the struggle for ever-needed progress. But we must take into account the fact that neither education nor art, per se, nor culture in the broadest sense of the word, are by their very nature sufficient defences against the fury of racism and anti-Semitism. We must learn from this.

The Third Reich collapsed, its founder committed suicide, his main henchmen were hanged, or they vanished. The immensity of the Jewish genocide in Europe was discovered, which gave rise to a powerful movement − at the newly-created United Nations − in favour of the creation of a Jewish state. The Allies had, moreover, already made such a commitment between 1914 and 1918.

The creation of a Jewish state in Palestine − which we must remember ensued from a United Nations decision, UN Resolution 181(II) of 29 November 1947 −  was not accepted by all. The result was a war, launched by the armed forces of the neighbouring Arab states. They invaded Palestine, the conflict turned to the advantage of the Jews and the rest is history. The Israeli-Palestinian conflict has, in fact, never ceased since the creation of the State of Israel.

I am not going to discuss the legitimacy of the rights of the various parties here, nor the best solution to end this conflict – these issues need to be discussed in other forums. But that is the reality. What is certain is that in the context of the Israeli-Palestinian conflict, anti-Semitism has once again spread widely under the name of anti-Zionism.

We must have the lucidity to recognize that under this label that refers to Zionism, it is indeed the Jews, and Jews everywhere, who are targeted. And I would say that anti-Zionism under the surface is nothing but the contemporary expression of anti-Semitism, namely, hatred of the Jews. 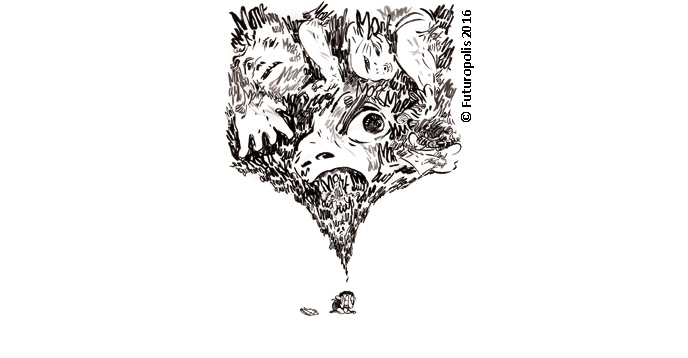 Today's anti-Semitism, of course, does not present itself in the same form as the one dating back to Constantine. It widely and successfully uses social media; speeches and videos, posted on certain websites, are based on a particularly perverse rhetoric. I have pondered at length what might have happened in pre-1939 Europe if Dr. Goebbels (Reich Minister of Propaganda of Nazi Germany, 1933 to 1945) had had access to the same technical means that we have today in the digital age. This is the new battleground, as far as the fight against anti-Semitism is concerned.

I would simply state my conviction, as a man who has lived a long time, and who has never seen anti-Semitism lose its hold − that as long as the Israeli-Palestinian conflict continues, it is clear to me that hatred of the Jews, far beyond the Middle East, will continue to inflame some Muslims, especially the younger ones, inspired by the internet and the shrill propaganda of the violent images familiar to us.

Hence the atrocious attacks that occur throughout the West, notably in France and in the Middle East, where the conflation of “Jewish equals Zionist” feeds anti-Semitic hatred. It is enough to look at a list of the victims of the crimes committed in the last few years.

A recent image haunts my mind: a man, pursuing Jewish children in a Jewish school, and a little girl running away. And because she is running, this man grabs her by the hair and shoots her point-blank. What is this crime, if not a replica of the acts of the SS (The Schutzstaffel, the paramilitary organization of the Nazi party)? A horrifying expression of anti-Semitism, this image traverses time, reminding us of  the Einsatzgruppen (SS death squads, 1939 to 1945) let loose in the ghettos of Eastern Europe.

Finally, I would like to point out, and to stress emphatically, one thing concerning action for civil peace. It is the importance of the role – and I would say for some, the fraternal role – of representatives of the Muslim community who denounce these crimes. Conflation here is another trap set by terrorism, and we certainly must not yield to it. I always stress the results of studies on terrorism by think-tanks, which have found that eighty per cent of the victims of terrorism in the world today are Muslims. I want to emphasize this fact, because conflation here would be reprehensible.

My message is not overly optimistic, I know, but I believe that complacency nourishes prejudice, and that prejudice nourishes death, because it breeds hatred. If we can make the principles of the Enlightenment and human rights triumph in the minds of the younger generations, we will have served the right cause − that of peace among peoples.

With this article, the UNESCO Courier contributes to the commemoration of the International Holocaust Remembrance Day on 27 January.

A French lawyer and Professor of Law, Robert Badinter was France’s Minister of Justice from 1981 to 1986. He is best known for obtaining a vote in French parliament to abolish the death penalty in 1981. Badinter was appointed President of the Constitutional Council from 1986 to 1995, and elected Senator (Socialist Party) for the Hauts-de-Seine department from 1995 to 2011.