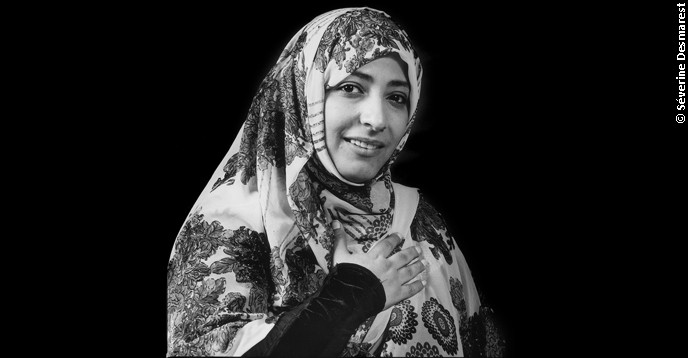 Portrait of Tawakkol Karman 2017, from the Hands of Peace exhibition by Séverine Desmarest.

Without justice, peace will always remain fragile − a kind of temporary truce, a rest for the warrior − which will only be followed by something more terrible, says Tawakkol Karman. The Yemeni feminist, journalist and human rights activist – one of the winners of the Nobel Peace Prize 2011 – participated in celebrations for the International Day of Non-Violence at UNESCO on 2 October 2017.

What does non-violence mean to you? And what is the likely impact of non-violent civil resistance in countries experiencing complex conflicts?

Political violence is the recourse to force to achieve political or religious objectives and to change the beliefs, opinions or behaviour of people in the public sphere. There is another type of political violence − that is certainly hard to condemn, but which I do not recommend – it is the use of force as a means of resistance to an occupier.

I am convinced that non-violence is the most effective way to combat tyranny and find a way out of complex conflicts. It is always possible to resort to it. But that demands faith, courage and the capacity for self-sacrifice. In the end, change is achieved at a lower cost, and its effects are more powerful and more effective. Those who choose violence to change things do not always get what they want.

For me, non-violence is the common denominator of all my actions. I have adopted it in what I say, in what I do and in my strategies. I never shy away from it and I don’t see any alternative.

As a journalist and political activist, you are, first and foremost, defending human rights.

My goal is clear – it is to contribute to the establishment of democratic states that respect freedoms and human rights. This objective can only be achieved through a fight against the violation of these rights and tyranny − and the building of legally-constituted states founded upon citizenship and institutional integrity. I act in a number of ways within civil society and use all kinds of platforms, including the media, human rights and politics.

What I try to explain, wherever I go, is that tyranny deprives societies of development and peace. Societies deprived of freedoms and human rights live in a state of precarious peace, which is doomed to collapse rapidly.

In 2005, you co-founded Women Journalists Without Chains, which aims to promote freedom of expression and democratic rights. What difficulties have you encountered over the last decade and what has been your main success?

Women Journalists Without Chains was founded to combat widespread repression in the world of information at the time – arrests, beatings and various forms of aggression – but also to defend the right of every citizen to become the owner of a media, whether print, radio and television or digital.

We put a great deal of effort into defending the civil and political rights of citizens. We participated in several actions to fight against corruption and the abuse of power. We organized sit-ins and demonstrations to help citizens stand up to the domination of influential tribal leaders.

It was a long struggle, on a daily basis, which resulted in the release of a large number of journalists who had been detained or abducted. This also made it possible for a number of independent and opposition newspapers that were previously banned, to be published again.

Even before the peaceful revolution of 11 February 2011 (in Egypt), I helped, along with others, to reduce violations by the incumbent regime (in Yemen). We created a force of civil pressure in order to preserve a minimum of rights and to raise the level of demands. After this civil revolution, Yemen entered a period of transition, where people could fully enjoy their rights and freedoms. There were no restrictions on freedom of expression, of assembly, the right to demonstrate or any other form of rights and freedoms. Everyone benefited, without distinction. There were no arrests or detentions – until the coup of January 2015 and the war that followed.

What is your view of Yemen today, devastated by what you have called a “total war”? What do you plan to do to ensure a better future for your country?

We can only think about the future of a country when peace has been restored. But peace does not just mean the end of war; it is also the end of oppression and injustice. There can be no peace without justice, because, without justice, peace will always remain fragile − a kind of temporary truce, a rest for the warrior – and which will only be followed by something more terrible. And the worst of wars are those waged by tyrannical regimes against their own people. This is why I remain convinced of the need to oppose regimes that do not respect rights and freedoms and which are unable to guarantee them, whether for individuals or institutions. They have to be replaced.

My struggle today, as in the past, remains focused on democracy: to put an end to the situation imposed by the coup d'état in Yemen and to hold a referendum on the draft constitution − which has already found consensus during the national dialogue set up during the period of transition. After that, elections can be held.

Consequently, when political life returns to normal, I plan to found a political party which will bring together youth and women to carry forward the civic project advocated by the revolution. On the international front, I will continue to fight to defend human rights, promote peace and combat tyranny. 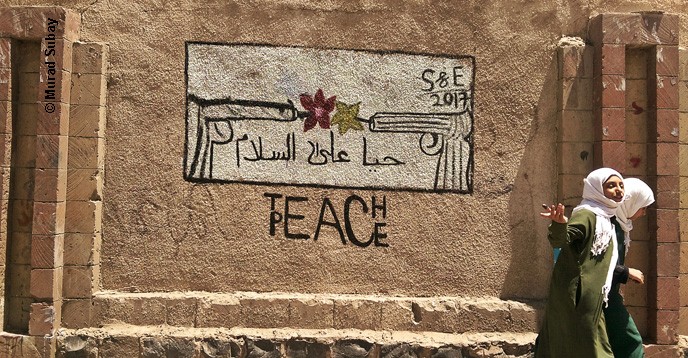 A wall painting created during the Open Day of Art, a public event organized by Murad Subay in Sanaa (Yemen), March 2017.

In October 2011, you received the Nobel Peace Prize with Ellen Johnson Sirleaf and Leymah Gbowee. What is it that unites you all?

The dreams we share are the building of a civil state, the use of non-violence as the only way to operate, and the defence of women’s rights for effective participation in political affairs. With Ellen Johnson Sirleaf, we have worked together with the United Nations on the Sustainable Development Goals. As for Leymah Gbowee, we have worked together to promote peace and human rights, particularly through the Nobel Women’s Initiative – which includes four other women Nobel Peace laureates – and the Nobel Peace Prize Forum, which works to coordinate action to promote peace and combat tyranny and violence.

The Norwegian Nobel Committee said that it hoped, among other things, that the 2011 prize would “help to bring an end to the suppression of women that still occurs in many countries…”. What could Arab women do to contribute to peacebuilding?

We have led a long campaign to end the repression of women, and the struggle continues. This will not happen within a matter of days or months, but I remain convinced that we will succeed one day.

Unfortunately, in the Middle East, more than elsewhere, women are exposed to repression. Adding to the violations of women’s rights, especially in the Arab Spring countries, has been a lust for wealth. This, in some cases, has led to the sponsorship of coups d’état, counter-revolutions and even collaborations with the enemy. But we are determined to continue our struggle. Arab women are the driving force of sustainable peace in their countries and in the region.

In one sentence, how would you summarize your philosophy of life?

I was born into a family whose philosophy of life revolved around two words – righteousness and justice. My father is a man of the law, and one of the earliest constitutionalists in the country. He is known for his efforts to fight against corruption and nepotism, and for his integrity in the high public offices he has held. Thanks to him, I acquired the legal culture needed to assert rights and conquer freedoms, the courage to speak the truth and confront oppression and injustice. He taught me to take initiatives, to be part of the solution and not part of the problem. My mother taught me to love people and to understand their suffering.

With this interview, the UNESCO Courier marks International Women’s Day, on 8 March.

More on women's issues in the UNESCO Courier:

The generalissimo of the peace movement

Tawakkol Karman (Yemen), Nobel Peace Prize 2011 laureate (with Ellen Johnson Sirleaf and Leymah Gbowee), is a feminist and human rights activist and one of the leading figures of the Arab Spring in Yemen. She has been arrested several times for organizing peaceful protests against Ali Abdullah Saleh (1942-2017), who was president of Yemen for over thirty years till 2011.