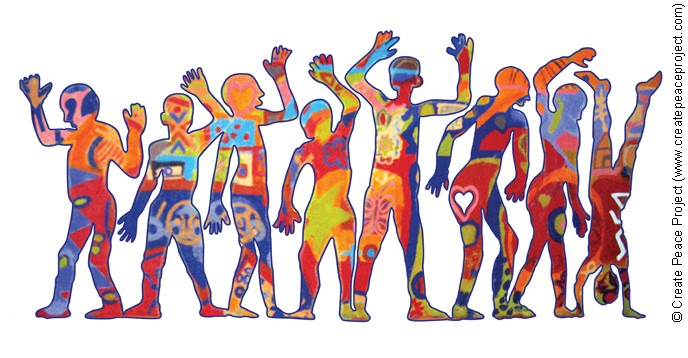 Artwork produced during a workshop by the Create Peace Project, which involves students across the globe exchanging messages of peace.

It is imperative to equip the next generation with an education that will help them understand, care about and address the global risks we all face. Only then can we live in peace with one another, and with the planet we inhabit, argues education expert Fernando Reimers. He has created two innovative Global Citizenship Education curricula at Harvard University to help students become global citizens.

What is education but the construction of opportunities for people to develop the skills and mindsets that help them live in ways that advance worthy goals?

This idea dates back at least to the sixteenth-century pedagogue, Jan Comenius, who argued, in his Didactica Magna, that we should educate all, so we could have peace in the world. The same idea was captured in the inclusion of education as one of the rights in the Universal Declaration of Human Rights adopted in 1948, and in the Preamble to UNESCO’s Constitution.

The inclusion of that right in the Declaration sparked one of the most remarkable silent revolutions experienced by humanity. Global access to basic education increased from under 50% in 1948 to over 85% today, and the percentage of the population who could read, increased from 36% to 85% in the same period (Global Rise of Education, 2017). That this increase in access to education took place while the world population grew from 2.5 billion to 7.3 billion, makes it all the more remarkable.

Over the last decade, I have been working to understand how best to support the development of education systems to educate students as global citizens. The education process that leads to global competency must be supported by a high-quality curriculum and sustained by effective teacher preparation and leadership.

With a number of collaborators, I developed two comprehensive school curricula, from kindergarten up to, and including, high school. We continue to collaborate with a network of schools around the world, developing instructional resources to further advance effective global citizenship education.

The first curriculum, published in the book, Empowering Global Citizens (2016), was designed in 2011 and 2012 to be taught in a six- to eight-hour a week course from kindergarten to high school. It was initially developed to be taught at Avenues: The World School, a global network of independent schools which was establishing its first campus, in New York, at the time.

We developed a competency framework which included ethics, knowledge, social competencies, self-knowledge and mindsets, aligned to the development of capacities that would help students develop a global consciousness – while cultivating their motivation and skill to address global challenges.

Central to the conception of global competency was the notion of empowerment, cultivating a mindset that each individual can make a difference, can take the initiative and act in leadership roles.

We used a project-based learning approach, offering opportunities for students to develop their own interests and passions; it involved parents and community members as well.

Instead of just engaging with content knowledge, students are engaged in creating a product that demonstrates deep understanding – whether it be a puppet show (kindergarten), a business plan (third grade) or a social enterprise (eighth grade).

For example, in third grade, students study global interdependence through creating a project in chocolate manufacturing and the creation of a marketing campaign that touches on global food chains, the ethics of free trade and child labour.

As this first curriculum was published and widely shared, it became clear that a simpler version was necessary to facilitate wide-scale adoption. Feedback from those who adopted the curriculum paved the way for a more effective and accessible approach.

Adopting and developing such a curriculum is within the reach of a wide range of schools, with varying levels of resources and support. Having a concrete prototype makes it possible to obtain feedback. It requires teaching only five lessons in each grade – yet it is a rigorous and robust sequence, with a clear set of learning outcomes.

This second curriculum is aligned to a map of global competencies that characterize a high-school graduate who understands globalization and appreciates the opportunities it offers for people to collaborate on improving their communities. These competencies map onto the Sustainable Development Goals.

As part of the Global Education Innovation Initiative (an international collaborative research-policy practice group) I lead at Harvard University, I am now working with a number of schools and networks of schools around the world, learning together how to implement intentional global citizenship curricula. The original two curricula have been translated and adapted into Chinese, Portuguese and Spanish.

We are learning that establishing conditions that sustain high-quality global citizenship education at scale requires collective leadership, and coordinated efforts – across a range of organizations in the public and private sectors over an extended period of time – that sustain the capacity of educators to lead powerful learning.

Similarly, creating opportunities for education leaders to share what they have learned with others can accelerate the process of intentional cultivation of leadership, a crucial step in making education systems relevant to the twenty-first century, as discussed in One Student at a Time. Leading the Global Education Movement (2017).

There is solid evidence that intentional high-quality curricula and effective pedagogies can empower students to become active global citizens. Education is indeed a most powerful avenue to help students improve the world. The task to educate each of the 1.2 billion learners as global citizens has never been more urgent.

Fernando M. Reimers (Venezuela) is the Ford Foundation Professor of the Practice in International Education and Director of the Global Education Innovation Initiative and of the International Education Policy Program at Harvard University. An expert in the field of international education, he is interested in advancing understanding of the ways schools can empower students to participate civically and economically, and to help achieve the Sustainable Development Goals.