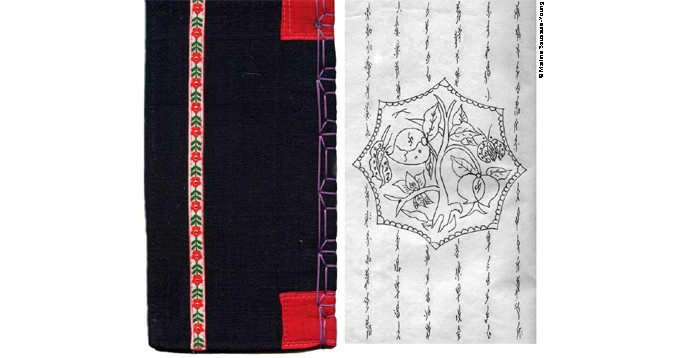 Cover and inside page of a sanzhaoshu or “third day letter” given to a newly married woman three days after her wedding.

Nüshu is considered to be the world’s only writing system that is created and used exclusively by women. Originating in China’s Jiangyong county in the nineteenth century, it gave rise, over time, to a traditional female culture, which is endangered today. The country’s local and national authorities are working to revive it.

Nüshu literally means “women's writing” in Chinese. Today it is the world’s only script designed and used exclusively by women. It was developed among the rural women of the Xiao River valley, in the Jiangyong county of China’s Hunan province, where there is a mixture of Han culture and Yao folkways.

Nüshu characters are a rhomboid variant derived from square Chinese characters, adapted to the local dialect (Chengguan Tuhua). The characters are formed with dots and three kinds of strokes − horizontals, virgules and arcs. These elongated letters are written with very fine and thread-like lines.

The earliest known artefact in the Nüshu script is a bronze coin discovered in Nanjing, the capital of Jiangsu province. It was minted during the Taiping Heavenly Kingdom, a rebel kingdom in China from 1851 to 1864, which introduced important social reforms and adopted − to a certain extent − several policies regarding gender equality. The eight characters etched in Nüshu on the coin mean “all the women in the world are members of the same family”.

A culture of sunshine

Nüshu was taught mainly by mothers to their daughters and practised for fun among sisters and friends. It was used by women in a feudal society who lacked access to education in reading and writing.

This syllabic script was generally used for writing autobiographies, letters between sworn sisters, and sanzhaoshu – "third day missives" of good wishes, presented to a bride by her closest friends, three days after her wedding. It was also used to record folk songs, riddles and translations of ancient Chinese poems, and to compose songs for farm women that promoted morality – stressing the importance of helping their husbands and encouraging frugality in household management. All of these works are in poetry form − most are seven-character poems and a few have five characters.

According to Zhao Liming, a professor at Tsinghua University in Beijing, Nüshu is not just a script − it represents a typical Chinese traditional female culture. It was like a ray of sunshine that made women's lives more pleasant. “It is a culture of sunshine,” she says, “which allows women to speak up with their own voices and to fight against male chauvinism.”

Zhao explains that it was customary for women to gather together to sew clothes and sing Nüshu songs. The Nüshu script can be found inscribed on paper and fans, and also embroidered on clothes, handkerchiefs and belts. “Each woman in Jiangyong county was responsible for writing a biography,” she continues. “Those who didn’t know how to write might have others write for them. Daughters would also write biographies for their mothers, after their deaths.”

Like a fragile plant, Nüshu withered when its writer died. When older women  felt the end was near, they would often ask family members to place some of their writing in their coffins and to burn other pieces of their work. Thus, most of a woman’s work was buried with her; her descendants were often left with only a few examples.

“The content of Nüshu works comes from women’s everyday lives – marriage, family, social interactions, anecdotes, songs and riddles. These are rich in folk custom and are important for the study of linguistics, grammatology, archaeology, anthropology and other human and social sciences,” explains Zhao, who has been studying Nüshu for thirty years.

After several years of research, her team at the Tsinghua University collected and translated over ninety-five per cent of all existing original documents written in Nüshu, to produce the five-volume Chinese Nüshu Collection, published in 2005 − the most complete anthology of Nüshu works to date. Before it, only one chapter of the book, A Ten-year History of Jiangyong, published in 1959, was dedicated to Nüshu. The first documentary evidence of this script is found in the 1933 Survey Notes on Counties of Hunan Province.

“Women used their own script to tell stories, to comfort each other, to sing out sorrow and to express admiration. In the process, a paradise was built,” says Zhao. “Tianguang (heavenly light) is a word that often occurs in Nüshu works.” Nüshu practitioners found comfort in this word, which could guide them through all their sorrows and difficulties to a better life. “None ever committed suicide, in fact, because Tianguang made them stronger and more optimistic. Through their tears, they never stopped seeking the light of the sun.” 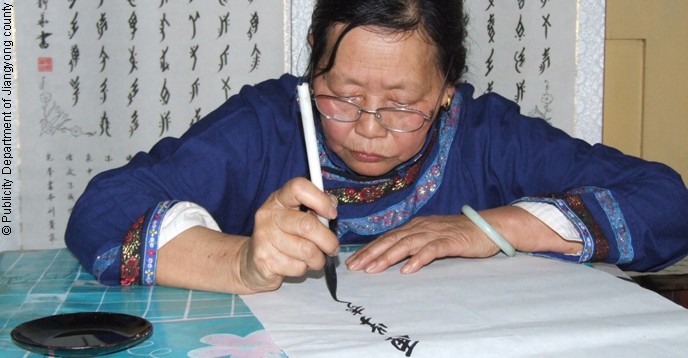 He Jingua, writing the phrase “mysterious scripts through the ages” in Nüshu characters.

A script from tears

“This script helped women in Jiangyong to dry their tears,” says Tan Dun, renowned Chinese composer and conductor, and UNESCO Goodwill Ambassador. “When I hear their beautiful songs, I can see their tears.” In 2008, he went back to Hunan, his home province, to research Nüshu culture. “At the gate of Shanggangtang village, there is an 800-year-old Song Dynasty bridge. Half of it has collapsed. It reminded me of Nüshu, which is also on the verge of extinction,” he wrote in his travel diary.

Tan Dun promised himself he would help save this script, the characters of which look like “musical notes flying along on the wind”. Some of them reminded him of the harp and the Chinese stringed pipa. The idea for a new symphony, Nüshu: The Secret Songs of Women, was born. Since 2013, the Philadelphia Orchestra (United States), the Royal Concertgebouw Orchestra (the Netherlands), and the NHK Symphony Orchestra (Japan) have co-produced performances of this Nüshu symphonic poem at several prestigious musical venues across the world. From a confidential women’s culture, Nüshu is becoming a “global culture that belongs to the world,” Tan Dun tells us. According to the composer, the success of his symphony “shows the world’s respect for women’s Utopia.”

The thirteen-movement modern symphony, which combines Eastern and Western musical forms, reflects different aspects of Nüshu culture − songs about dressing for the wedding ceremony, the daughter’s separation from her mother on her wedding day, remembering fifty years of married life, longing for childhood friends, and so on. The central instrument is the harp, which, according to the composer, sounds like “a woman telling a story and crying”. He has incorporated thirteen short videos, recorded during his journey home in 2008, into the production. It was the first time that someone filmed Nüshu traditional culture.

In Shanggangtang, he met six women who can still write Nüshu and who have been designated by the county government as keepers of the Nüshu tradition. Thanks to them, this ancient culture can be passed on to new generations.

“For me, the secret of immortality is the effort to preserve endangered cultural traditions and deliver them to the future,” notes Tan Dun.

The death of centenarian Yang Huanyi on 20 September 2004 marked the start of the “post-Nüshu era”. Yang was one of the most famous writers and holders of Nüshu culture.

The progressive disappearance of Nüshu culture and the need to protect it have aroused particular attention at all levels of government. In 2002, Nüshu was added to the Chinese National Register of Documentary Heritage. Since 2003, the introduction of Nüshu workshops in Jiangyong county has helped develop this culture by attracting more people to learn about it. In 2006, the State Council listed Nüshu as a national intangible cultural heritage.

A Nüshu museum was built in Puwei Island, Jiangyong county, in May 2007. This beautiful island, surrounded by the Xiao river, was home to many famous Nüshu authors, making it an important place for Nüshu culture. According to Yang Cheng, Director of the Jiangyong Publicity Department, “the special Nüshu culture is the crystallization of the collective wisdom of women whose spiritual pursuits of intelligence, sense of self-respect, self-improvement and innovation have allowed various civilizations in the world to blossom with radiant splendour. And the protection of this national culture requires not only attention from academics, artists and officials, but also, more importantly, the cultural awareness of local people.”

Over the years, China has made an effort to develop language legislation and planning, as well as to improve the digitalization and standardization of language. As part of the Chinese government's plan to protect language resources, launched in 2015, Jiangyong has been designated as a pilot area for an ecolinguistics project.

Local governments are currently commissioning Nüshu specialists (researchers and authors) to prepare easy-to-understand manuals to explain the historical background, values and basic elements of Nüshu culture − stressing its significance and the need for its preservation. This content will be included in primary and secondary elective courses, to popularize the unique women’s script. 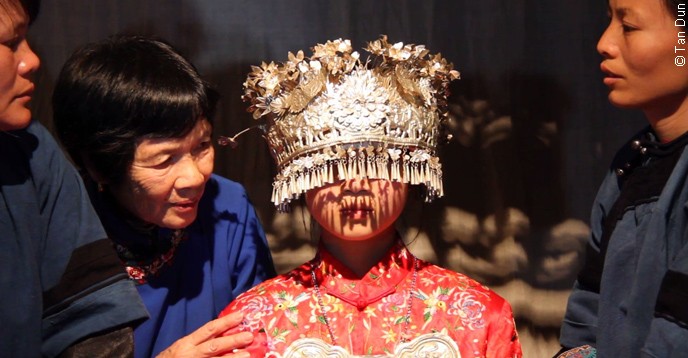 Scene from a microfilm, “Dressing for the wedding”, created by composer Tan Dun in 2008.

Because Nüshu was used among women to write the local dialect, its writing was not standardized, meaning each practitioner has her own, often highly colourful, wording and phrasing style. To put the transmission of the script on a more scientific footing, Zhao and her team worked on “Nüshu Character Unification”. Among the 220,000 characters used by Nüshu practitioners, they chose the most frequently used, based on a statistical survey. In 2015, 397 Nüshu characters were admitted by the International Organization for Standardization (ISO) and in March 2017, China’s proposal to include Nüshu characters into the Universal Coded Character Set was approved.

The conservation and protection of Nüshu culture represents a huge and complex social project. With the increasing exploitation of cultural space and the development of the information era, Nüshu is making progress in the endeavour  to ensure its survival. Among its enthusiasts, some simply admire this charming old script, others are exploring business opportunities and developing creative products. And some are seizing the opportunity to promote a fine example of women’s traditional culture.