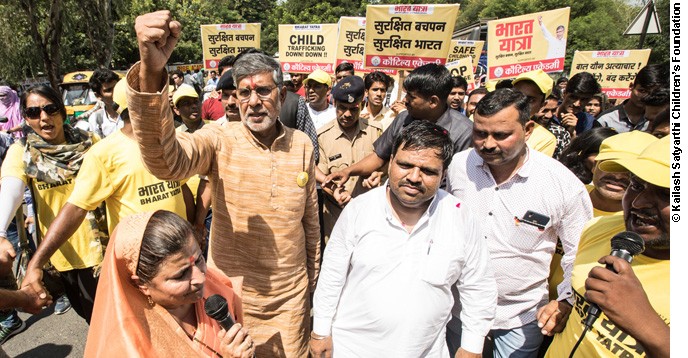 September 2017, on the twenty-third day of the Bharat Yatra march in Indore (Madhya Pradesh, India).

Children may have been given the right to education, but now they must be educated about their rights. This is the new challenge faced by Kailash Satyarthi, winner of the Nobel Peace Prize 2014. He has been at the forefront of the fight against child slavery and labour since 1980, when he founded his movement, the Bachpan Bachao Andolan (Save the Childhood Movement), which has helped liberate more than 85,000 children in India from exploitation – through education and rehabilitation.

Satyarthi tells the UNESCO Courier how his quest to improve the lives of children began, what he hopes for from his new cause to make schools safe, and why he believes true liberation starts with education.

Where and how did your  impulse to fight for children's rights start?

When I was five. The very first day of my schooling, I saw a boy, around the same age as me, sitting outside the school and looking at my shoes. He had a shoe-polishing box in front of him. I was very disturbed. My first-ever question to the teacher was: why was the boy outside and not inside the school? The teacher said it was very common for poor children to have to work.

One day I asked the boy’s father about this and he said his father and grandfather had also been shoe-shiners. Then he said: “Sir, don’t you know that people like you are born to go to school and people like us are born to work?” That question really stayed with me, but I had no answer as a child.

When I got older,  I saved my old schoolbooks and collected my pocket money to pay the fees for poor children. I trained as an electrical engineer, but the feeling that I should do something for these children never left me. I left my job to become truly involved.

What would you say were your first major achievements?

From the very start – when I used to write and print thousands of leaflets to be distributed in the market for our first campaign – I have believed that education and liberation are two sides of the same coin. When I first tried to bring the issue of child labour into the public domain, there was nothing being done about it. India did not have a law against child labour till 1986. I fought for six years for this law and it is still not perfect, so the fight goes on.

When I freed children from slavery and asked for them to attend school, I was humiliated so many times. I was told they are dirty, uncared for, we can’t have them here.

I spoke to legal friends, who explained to me the problem was that India did not have education classed as a human right in its Constitution. It was only in 2001 that a mass campaign led to the 86th Amendment to our Constitution, making education a human right.

Your child labour campaign started in India, but soon became international. How did that happen?

It took two decades before it became a global issue. When I founded the Bachpan Bachao Andolan (BBA) in 1980 in India, I discovered that none of the United Nations bodies – the International Labour Organization (ILO), the United Nations Children’s Fund (UNICEF) – or the World Bank, had any international legal instrument to prevent children from being drawn into labour, trafficking, prostitution and other dangerous occupations.

I began to look at Pakistan, Nepal and Bangladesh, and realized that they all had similar situations concerning contemporary slavery. In parallel, I started to participate in the Human Rights Commission in Geneva, Switzerland, and decided to work towards an international law against child slavery.

I campaigned in Europe and America and set up a programme in Germany to fight against child labour. As a result, the first ILO International Programme on the Elimination of Child Labour was born in 1992, and then UNICEF and the World Bank joined in.

In 1993, BBA initiated the first campaign in the form of a march against child labour in India. Five years later, we launched the 80,000-kilometre Global March Against Child Labour across 103 countries, which lasted for six months.

The crowning achievement of these efforts was undoubtedly the ILO Convention 182, concerning the Prohibition and Immediate Action for the Elimination of the Worst Forms of Child Labour. It was unanimously adopted and ratified by 181 countries. This happened in 1999, twenty years after my first leaflets were circulated in India. 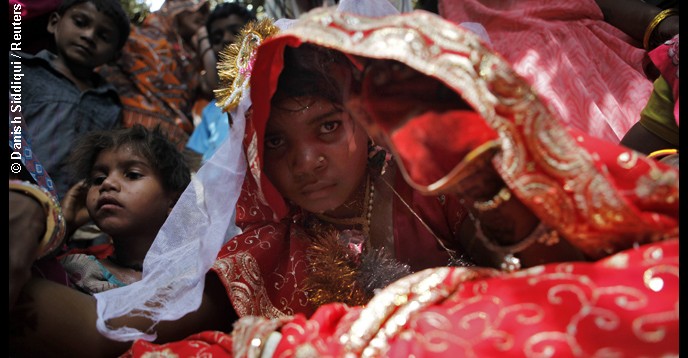 Marriage of an under-age girl in Kota (Rajasthan, India), 16 May 2010. Early marriage is one of the main obstacles to education in India.

Ten years ago, you launched another march in South Asia, to advocate for a regional protocol against forced labour, and more recently, in September 2017, the Bharat Yatra march to end child sexual abuse and trafficking. What made you organize these marches?

Bharat Yatra, a nationwide mobilization covering 11,000 kilometres over 36 days, was a clarion call  to “Make India Safe Again for Children”. Child sexual abuse is a growing problem worldwide, but in India it has become a modern epidemic – with young children abused, raped or trafficked on a daily basis.

A child is sold every two minutes and sexually abused every half hour. In most cases, the perpetrators are school bus drivers, teachers, tutors.  While they roam free and fearless, the victims keep quiet out of feelings of shame.

I realized I had been fighting all this time for every child to be in school, but in fact children are not always safe there.

The first thing that has to change is the taboo associated with child abuse. That requires a mass movement, so we used the time-tested strategy of marching. Based on our previous successful experiences, we have tackled the problem of violence against children – this time including child marriage and exploitation, which remain huge obstacles to education.

How successful was this journey and what will happen now that awareness has been raised?

To have 1.4 million people join the Bharat Yatra march was unprecedented, particularly as the topic of child sexual abuse is taboo. Wherever we went, young people from the crowd stood up, even came to the stage, and spoke for the very first time about what was happening to them.

Children may have been given the right to education, but now they must be educated about the rights they possess. We are also pushing for a Safe Schools campaign to be promoted by schools, universities and colleges across India, where the priority will be safety from sexual abuse.

We are now working on a study assessing attitudinal and behavioural change and knowledge-building as a result of the Bharat Yatra campaign, which may be shared internationally. We have already had requests from other countries to run Safe Schools campaigns there.

During the Bharat Yatra march, you told politicians they should go back to school. What did you mean?

They pledged to visit the schools they had attended, and I told them they should go, not as VIPs (Very Important Persons), but as ordinary fathers and mothers and try to learn more – not just about safety, but about the quality of education, the general school environment, the teachers. Is the school child-friendly? Does it have the midday meal programme? What is school attendance like? So often the education sector is aloof and disconnected, and corruption can mean that in rural areas, teachers don’t turn up and school drop-out rates are high.

By getting politicians to visit schools, many changes can be brought about at the same time. I also asked that female police officers visit schools more often, to build the idea of protection. The government has indicated that there will be a new bill against human trafficking, including child trafficking. The bill will also include education campaigns and programmes to help create awareness on the subject. 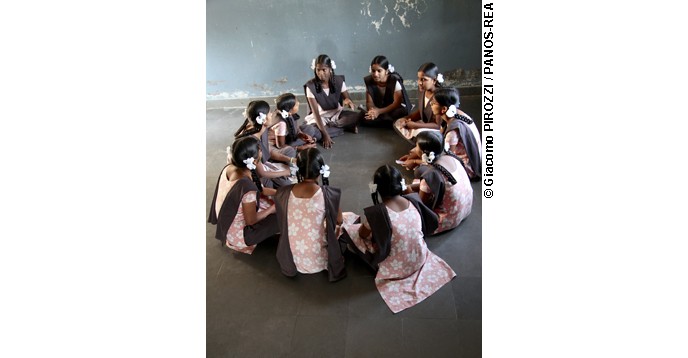 Indian students at a meeting.

You were awarded the Nobel Peace Prize in 2014 for your “struggle against the suppression of children and young people and for the right of all children to education.” Did it change your life?

I always joke that I was handed a medal for peace and all my peace was taken away! I have received about 40,000 invitations and would need to live another 160 years to attend all these events. At the same time, I am very happy to be thought of as the ordinary man’s Nobel laureate. Being directly connected with ordinary people gives me much more confidence in what I am trying to do.

One downside is that I am not able anymore to personally go on child labour rescue operations! My face is so well-known that I am recognized even in the remotest areas. This means there will be a tip-off, and children are removed from the mining area or factory before I get there. In several cases, I have had to be more stealthy and return two or three times to find them. On the positive side, I have access to almost all the  heads of UN agencies, prime ministers, presidents, where I can talk directly about policy change.

You have come a long way from your original career as an electrical engineer. Have you found a place for those skills in your work?

My training has proved extremely useful in that it allows me to think in an analytical, rational and structured way. I believe this is why my work against child slavery has a rights-based, rather than a conventional, charity approach. Structural change is much easier to bring about when you are familiar with a structural approach.

What changes in children’s lives have you witnessed since you became an activist?

I know that once we free children from slavery and child marriages, we see a ripple effect. Education brings empowerment, dignity and identity to the most deprived and marginalized people, particularly children and girls. Once they are educated about their rights, and acquire reading and writing skills, they gain tremendous self-confidence.

I have witnessed girls standing up and refusing to be married against their will because they know their rights and can go to the police or to a non-governmental organization (NGO). In the same way, many boys trapped into slave labour, once they know they have rights, are able to make contact with someone who can help.

You have met thousands of children. What have they taught you?

That it is essential to keep the child alive inside oneself. I believe when people are genuine and simple and clear in life, it is because they have not forgotten the importance of being childlike.

What keeps you motivated?

What keeps me motivated? The dreams I can see in children’s eyes.