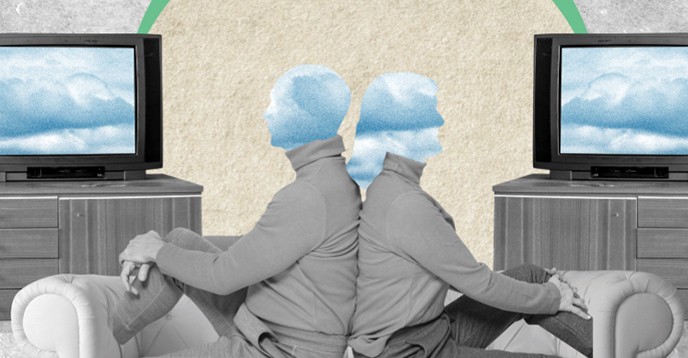 Identifying with fictional characters and stories can help us feel connected to others, or to find joy, meaning, and comfort in times of stress.  It can also do the opposite. But this phenomenon can be a force for good when it allows us to reduce prejudice against marginalized groups.

This past year, many of us have turned to familiar or absorbing television shows as a soothing diversion from the daily threat and isolation of a worldwide pandemic. At a basic level, our media “diets” reflect our desire to be entertained, or to escape, however briefly, from personal stress, tedium, or loneliness.

Do we typically feel immersed in the shows we watch, or develop strong emotional bonds with characters?  Rather than being arbitrary or frivolous, our media affinities are meaningful, and offer a window into our socio-emotional needs and tendencies. A body of empirical evidence finds that what we watch impacts our thoughts, emotions, or behaviours.

Two key concepts of the psychological motivations that draw us to entertainment media have been studied by psychologists: transportation, and parasocial interaction.

Transportation – a concept devised by American social psychologists Melanie Green and Timothy Brock in 2000 – is the process by which we become immersed in a story, including our identification with characters. Some of the pleasure that may accompany transportation includes an expanded sense of self that incorporates characters’ experiences and perspectives.

Parasocial interaction is defined as the imagined friendship we develop with media characters as we “get to know” them over time. The term was originally coined – by the anthropologist Donald Horton and sociologist Richard Wohl, in 1956 – to describe the bonds that audience members developed with media personalities like talk show hosts. Since then, the idea of a pseudo-relationship with a media personality has been applied to a broad range of media figures, both real and fictional – from athletes, musicians, and politicians, to TV and movie stars, to social media influencers and YouTubers.

Our tendencies to become engaged with the media exist on a spectrum. Some of us are more likely to feel transported into TV shows and connected to characters than others. In my research, I have found that individuals who score higher on transportability and report more intense parasocial relationships also tend to have emotional vulnerabilities such as impulse control difficulty or relationship anxiety. The media they consume may be an attempt to compensate for negative feelings, in addition to complementing real-life preoccupations.

In an increasingly diversified media landscape, in which a Netflix or other streaming service  might offer anything from “Irreverent TV Comedies” to “Asian Anime” to “TV War and Politics” or “TV Programmes Based on Books”, it can be difficult to see genre as more than an infinite array of categories.

Beyond gender, those with more aggressive tendencies also tend to consume more violent media. My own research finds that aggressive and Machiavellian traits predict increased affinities for anti-hero films and programmes and their characters – like the sardonic and violent eponymous character in the 2016 action comedy film Deadpool, or the meek science teacher turned vicious meth king, Walter White, of the American TV series Breaking Bad. I also found that young women with increased body anxiety report more “wishful identification” with favourite female characters.

Much of the above work is correlational, which means it is difficult to tease out which direction the causal arrow points – from media to self or from self to media? However, experimental and longitudinal research suggests the answer is usually both. A series of studies conducted by psychologist Lynda Boothryd among residents of seven Nicaraguan villages (2016) found that viewing slim body ideals via TV or print was associated with an increased endorsement of a thin ideal body – both over time, and in the immediate aftermath of exposure.

Although transporting to fictional worlds and developing bonds with fictional characters may sound bizarre, both processes are theorized to be natural outgrowths of our evolved capacity to derive value from vicarious experience – and to seek affiliation with liked and like-minded others.

After all, we learn to navigate our social world by observation and co-operation. Importantly, emotional engagement with the media is strongly encouraged by the entertainment industry. As cultural anthropologist John Caughey has pointed out, “it would be peculiar if the audience did not respond in kind”.

Transportation and parasocial interaction can have important benefits for marginalized groups in society. Research by social psychologists Sohad Murrar and Markus Brauer finds that exposure to a sitcom featuring “diverse and relatable” Arab/Muslim characters reduces prejudice among white non-Muslim American viewers – especially when they identify with the target character.

Similarly, research by Bradley J. Bond, an associate professor in communication studies at the  University of San Diego, California, in 2020 finds that sustained “parasocial contact” with LGBTQ characters in the British series Queer as Folk decreased homophobia among heterosexual participants – particularly among those who began the study with higher levels of sexual prejudice. Therefore, once a television character becomes a “friend”, it is easier for the viewer to believe they should be treated fairly. Further, seeing diverse and positive representations of your own social group on TV can have powerful implications for psychosocial well-being.

Attaching to particular shows may also expand our social horizons. My own pandemic-coping strategy included transporting into the fictional landscape of Outlander – a time-travelling romance/adventure saga, in which a Second World War nurse finds herself in eighteenth-century Scotland. I am apparently late to the party – the ongoing TV series which started in 2014 has a vast fan community, partly derived from the fan base of the original book series by Diana Gabaldon.

Some Outlander fans have even raised hundreds of thousands of dollars for charities endorsed by the stars on the show – illustrating its potential for prosocial behaviour and the power of attachments to beloved characters or actors.

Our media habits are woven, in varying patterns and degrees, into the fabric of our daily lives. Our engagement with media is, in many ways, no less complex than our engagement with the concrete realities of lived experience and relationships.

Zeinab Badawi: “My hyphenated identity is an advantage”, an interview with the Sudanese-British television journalist, The UNESCO Courier, January-March 2018
Deeyah Khan: “They chose to pick up a gun, I choose to pick up a camera”, an interview with the Norwegian documentary filmmaker and activist, The UNESCO Courier, October-December 2017
Fictional prevention, The New Courier, October 2004