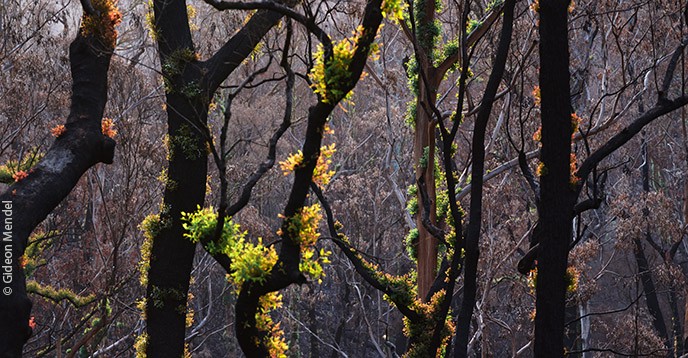 The forest of Wadbilliga National Park in New South Wales, photographed two months after deadly wildfires ravaged the area in December 2020, shows some signs of regrowth.

The decline of species, the shrinking of natural areas, soil and water pollution, and the modification of ecosystems due to climate change. The ills plaguing the planet are well-known, and have been documented for a long time. And yet, significant actions on a global scale have been slow to be implemented.

The United Nations Decade on Ecosystem Restoration (2021-2030) has been announced to accelerate efforts to curb this phenomenon. The degradation of life on the planet will also be at the heart of several key meetings planned in 2021, including the World Conservation Congress organized by the International Congress for Conservation of Nature (IUCN) in Marseille, France, in September.

Another crucial meeting, the Conference of the Parties to the Convention on Biological Diversity, COP 15, will be held in Kunming, China, in October. The 196 parties to the Convention will have the task of defining a post-2020 Global Biodiversity Framework. They will set the course for the international community to improve the protection of ecosystems by 2050.

The situation is urgent. In May 2019 at UNESCO, the Intergovernmental Science-Policy Platform on Biodiversity and Ecosystem Services (IPBES) presented an alarming assessment in its landmark Global Assessment Report on Biodiversity and Ecosystem Services. Using figures to back up its conclusions, it presented overwhelming evidence that the health of ecosystems is deteriorating at an unprecedented rate.

Human activities are now threatening more animal and plant species with extinction worldwide than ever before in history, the experts of this “IPCC (Intergovernmental Panel of Climate Change) of biodiversity” noted.

Humans have significantly modified no less than three quarters of the terrestrial environment and almost sixty-six per cent of the marine environment. And of the 8 million species listed on the planet, 1 million are already threatened with extinction. This means that one in eight animal or plant species is likely to disappear in the coming years.

Human actions are squarely to blame for this. The conversion of natural environments – particularly for agriculture or urban development – is the primary cause of the destruction and fragmentation of natural habitats. This is followed by the exploitation of natural resources and the pollution of soil, water, and air.

Long considered an aggravating factor, climate change is now identified as a growing risk. Among other effects, it causes the displacement of some species, as they move towards the poles, mountain tops, or the depths of the ocean. Invasive species are another factor behind the massive extinction – especially on islands, where they are particularly damaging for the native flora and fauna.

The loss of biodiversity undermines our capacity to achieve many of the goals of the United Nations’ 2030 Agenda for Sustainable Development. In short, it puts our future at risk. Nature provides the services that are essential for human existence. A single figure sums up this dependence – almost seventy-five per cent of food crops depend, at least partly, on pollination. And the ocean, soils and forests absorb sixty per cent of greenhouse gases emitted by humans.

When it comes to environmental change, the poorest populations are on the front line. As the guardians of at least a quarter of the planet’s land, and over a third of the areas that have not yet been altered by human activities, indigenous peoples are watching over their heritage – but even that is increasingly coveted for its natural resources.

Yet, these indigenous communities are often the custodians of knowledge and practices that deserve to be better preserved and promoted – as is the case with the actions within the framework of UNESCO’s Local and Indigenous Knowledge Systems (LINKS) programme. The knowledge of the Inuit about Arctic ice floes, the shifting agriculture practised by the Karen people of northern Thailand, the meteorological knowledge of the herders in East Africa – all bear witness to the relevance of this know-how, which enables humans to live in harmony with nature.

Trusting the resilience of species

In spite of several red lights, there is some good news. An update of the International Union for Conservation of Nature’s IUCN Red List of Threatened Species shows that some species are recovering as a result of effective conservation policies. Other species are showing unexpected resilience by adapting to environments – such as urban areas – that are very different from their native habitats.

The designation of an increasing number of protected areas allows humans to preserve ecosystems, such as UNESCO's network of World Heritage Sites, Biosphere Reserves and Geoparks, which cover almost 10 million square kilometres – an area the size of China.

The Convention on Biological Diversity goes even further. In an updated “zero draft” that will serve as the starting point for future negotiations, it proposes that the 196 countries that are party to the convention commit to protecting at least thirty per cent of the planet by 2030. The document also calls for a reduction of at least fifty per cent in chemical and plastic pollution, and to halve the spread of invasive species in some priority sites.

The stated objectives are ambitious. They are in line with the challenges.

Integrating the environment into school programmes by 2025