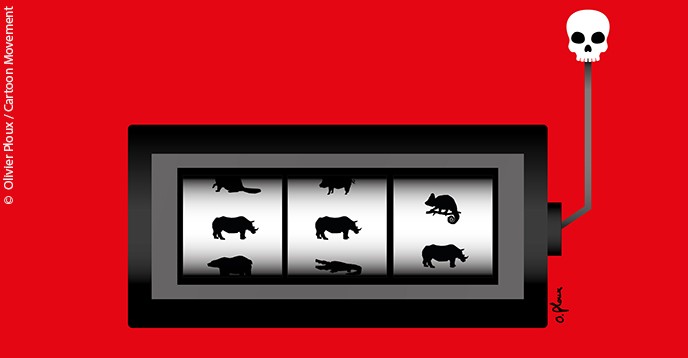 Agnieszka Ziemiszewska for The UNESCO Courier

While many species are now threatened, others are seeing their populations increase as a result of conservation measures. To be successful, conservation actions require a long-term approach, resources, and political will, as Remco van Merm, Species Conservation Grants Coordinator at the International Union for Conservation of Nature (IUCN) explains.

What are the conditions for efforts to halt the decline or disappearance of threatened species to yield positive results?

There is no silver bullet to prevent extinctions or achieve population recoveries. Successful efforts depend on a number of factors, including the biology of the species, the threats it faces, social factors, etc. In fact, it is the combination of different efforts that usually makes a difference.

For example, in the case of the Guam rail – a bird endemic to Oceania, which has been the subject of a captive-breeding programme since 1984 – several reintroduction attempts were required to enable the establishment of a self-sustaining population on Cocos Island, off the southern tip of Guam in the Pacific Ocean. The adoption of measures to control the invasion of the brown tree snake also continues to be key.

The latest update of the IUCN Red List of Threatened Species shows the success stories of the echo parakeet in Mauritius, and the trout cod (Maccullochella macquariensis), a large carnivorous fish found in the fresh waters of New South Wales, Australia. The echo parakeet has been the subject of a conservation programme since 1973. The dramatic increase in its population in recent years owes much to the intensive management of the wild population, combined with a successful captive-breeding programme launched in 1993.

In the case of the trout cod, a breeding programme was established in the 1980s in an attempt to reintroduce the species to the Ovens River, where it was once abundant. In 1997, and in every following year to 2006, juvenile hatchery-reared trout cod were released into the river. This programme may have been successful because fingerlings and one-year-olds were reintroduced annually for ten years, whereas shorter-term programmes in smaller waterways have had limited success.

Does the same apply for the conservation of plant species?

For plants, it should in general be easier to get recovery, provided that the threats are adequately addressed. A combination of in situ and ex situ conservation is often needed. However, very few plant conservation successes have been recorded in recent years. An example of a promising project is work on the restoration of threatened trees in the Araucaria forests in Brazil, including the critically endangered Paraná pine (Araucaria angustifolia). But it will take a few years to be able to measure its success, as these trees are long-lived species.

What are the main obstacles to be overcome to protect threatened species?

One of the first priorities should be to address the threats a species is facing. Unless those threats are removed, or at the very least, reduced to a manageable level, any efforts to increase species populations are likely to fail.

One of the main obstacles to the protection of species is the lack of resources, both financial and human. Another is the lack of political will. Globally, biodiversity conservation objectives are still rarely integrated into land-use planning, which leads to further degradation and fragmentation of important habitats for threatened species.

Can conservation success stories be duplicated in other areas?

Having said that, a solution that works for a certain species in one location may not necessarily work for the same species in another location – let alone for another species. This is because the success of conservation efforts also depends on the local context, including local cultural values and social norms. We see this very clearly in situations of human-wildlife conflict, for example. A solution that works to address human-elephant conflict in one scenario may not be suited to another context.

Does tourism always have a negative impact on species conservation?

Not necessarily. In some cases, tourism can be positive for conservation. In fact, IUCN  works with the World Economic Forum (WEF) to track travel and tourism sustainability metrics. IUCN also recently published some best practice guidelines for Tourism and visitor management in protected areas.

Tourism can contribute to conservation through the economic benefits it generates. These revenues can, and should, contribute to the protection of  species – particularly where tourism depends on healthy wildlife populations and natural habitats.