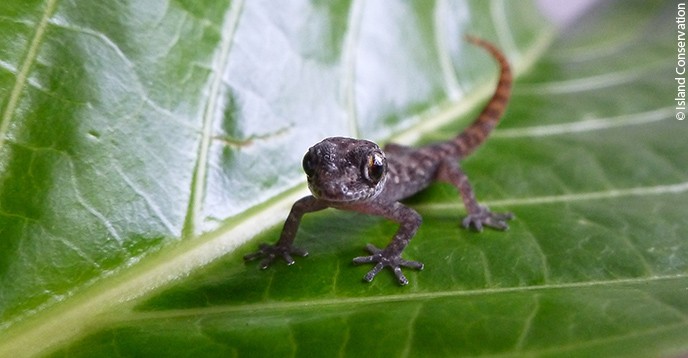 The tiny Rabida Gecko, once thought to be extinct, was rediscovered on Rabida Island in the Galapagos archipelago, Ecuador, once rats were successfully eradicated from the island.

Islands represent only a small fraction of our planet’s land-mass, yet they host a disproportionate amount of the world’s biodiversity. Today, many island species are threatened with extinction by invasive species. Measures are now in place to preserve their exceptional natural wealth.

Islands all have distinct ages, geographical locations, and degrees of isolation. These characteristics make each island unique – allowing them to house ecosystems with concentrations of flora and fauna found nowhere else. Some of these species evolve rare traits – such as gigantism, dwarfism, and flightlessness.

Although islands account for just five per cent of the world's land-mass, they are home to approximately seventeen per cent of the world's bird and plant species. Some tropical coastlines are home to coral reefs that are among the most biologically diverse ecosystems in the world – sustaining the livelihoods of millions of people. Many island species are found only on one island or island group, and are thus considered endemic to that location.

Madagascar, one of the world's largest islands and recognized as a global biodiversity hot spot, is home to 15,000 native species of land plants – eighty-five per cent of which are endemic, including over 1,000 species of orchids. In the Hawaiian Islands, a small continental bird has adapted to island life and eventually gave rise to nearly half of all Hawaiian land-birds. Its descendants, the Hawaiian honeycreepers, have more than fifty species, each with a different bill and tongue shape that is specially adapted to different food sources – seeds, fruit, insects or nectar. These birds provide a remarkable narrative of evolution in an island environment.

Since the beginning of the fifteenth century, sixty-one per cent of the global loss of species to extinction has occurred on islands – due to poaching, habitat loss and predation from introduced species. We know the fate of the famous dodo, a kind of flightless pigeon from Mauritius, which has disappeared forever. But it is just one of nearly two dozen native island species lost from the Mascarene Islands in the south-west Indian Ocean – including the extraordinarily large and long-lived giant tortoise.

A staggering concentration of extinctions have occurred on islands

Yet, extinctions are not just a thing of the past. In Kiribati, the Kiritimati Island pipistrelle, a tiny bat weighing less than five grams, was declared extinct in 2012. Conservation measures taken to save it were too late – the bat’s last call was detected in 2009.

A study of nearly 3,000 birds, mammals, reptiles and amphibians – classified as endangered or critically endangered by the International Union for Conservation of Nature’s IUCN Red List of Threatened Species – found that forty-one per cent of these endangered animals breed on islands. This highlights the staggering concentration of species threatened with extinction on such a small area of the planet.

Invasive species are a major driver of extinctions. Whether they are deliberately or accidentally introduced to areas outside their natural range, they can adversely affect native species and entire ecosystems. Only thirty invasive species have been linked to the extinction of 738 animals worldwide. These losses were concentrated on islands, where the invasive species were implicated in eighty-six per cent of known extinctions.

Invasive species are a major driver of extinctions

Invasive mammals are particularly devastating – predators such as cats and mongooses prey upon native species, while herbivores, such as goats and pigs, alter landscapes and contribute to habitat loss. Island species often evolved in the absence of predation, competition, or herbivory. This resulted in the evolution of flightless birds or thornless plants, and an overall naive disposition of native island animals, which are especially vulnerable to these aggressive invasive species.

On Gough Island in the Atlantic, Marion Island in the Indian Ocean, and Midway Atoll in the Pacific, the grey-brown house mouse, the smallest invasive mammal, has learned to prey upon and kill the albatross, the largest of seabirds. Unaware of this threat, breeding adults and their chicks stay in their nests in spite of relentless, often fatal, attacks by the mice.

There are ways to save certain species from extinction, using conservation techniques. In New Zealand, the control or complete eradication of invasive mammals has been successful. On Palmyra Atoll in the South Pacific, eradicating the Pacific rat, an invasive species which fed on native seedlings, resulted in a 5,000 per cent increase in native forest growth.

In another example, the eradication of rats from an islet off Antigua in the Caribbean led to a twenty-fold increase in the population of the endemic Alsophis antiguae, or Antiguan Racer, the world's rarest snake. A recent study found that hundreds of threatened native species rebounded following the eradication of invasive mammals.

Fences can also be effective to keep out invasive species – especially on large, populated islands where conservationists are now creating “islands within islands”. Building a fence at the Ka’ena Point State Park in Hawaii has created a safe and predator-free habitat for Laysan and Black-footed albatrosses to breed and thrive. The broadcasting of albatross calls using sound systems and deploying albatross decoys in courtship displays has boosted population recovery at these sites.

Due to its elevation, Ka’ena Point is one of the last remaining native coastal ecosystems in Hawaii that is safe from sea-level rise. Climate change is also exacerbating the plight of threatened island species. Yet, solutions such as managing invasive species on high elevation sites and moving threatened species to these sites when necessary, is improving the prospects for the survival of island biodiversity.

Establishing conservation databases is another way to help endangered species. The Threatened Island Biodiversity Database (TIB), for example, documents the distributions of critically endangered and endangered birds, mammals, reptiles, and amphibians around the world. These species occur on just 1,288 islands, representing only 0.3 per cent of islands worldwide.

This data allows ecologists to identify and prioritize feasible conservation actions. The Database of Island Invasive Species Eradications (DIISE) documents the methods and outcomes of invasive species eradication projects on islands worldwide. It contains information on eradication efforts for 1,400 invasive species on 940 islands – eighty-eight per cent of which were successful. This tool can help conservation managers evaluate past successes, plan new projects, and measure progress towards targets set by the United Nations Convention on Biological Diversity.

There is a real urgency to protect unique island habitats, which represent the last remaining truly wild places on earth. Experience shows that allocating limited conservation funds to islands generates high returns – promoting the recovery of species on the verge of vanishing, and the rediscovery of species once thought to be extinct. These successes highlight the vital conservation opportunities that islands hold for our planet.