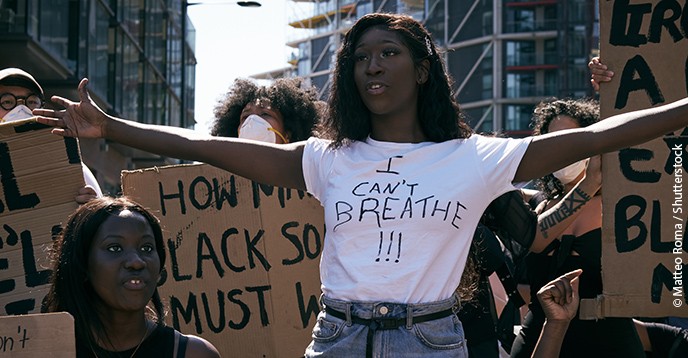 Black Lives Matter protesters in London, outside the American Embassy, May 2020.

The presence of people of African descent in Europe is generally viewed through the prism of slavery and colonization, obscuring a much older shared history.

The term ‘African European’ or ‘Afro-European’ is not widely used in Europe, whereas its equivalent – African American or Afro-American – is common across the Atlantic. I used it somewhat provocatively but also, and more importantly, to highlight the fact that people of African descent have a plural identity.

African Americans have appropriated the term, but African Europeans are more reluctant to use it because of the historical context; as in Europe they are often referred back to their African origin – even if they were born on European soil, and hold the nationality of the country in which they grew up. However, I think this designation has the merit of reflecting the diversity of origins, experiences and backgrounds of people of African origin.

The history of black people in Europe is generally considered to begin in the seventeenth and eighteenth centuries. You show that they have been there for much longer.

When we talk about the migration of people from Africa to Europe, we tend to trace it back to the slave trade. But it is much older. People from the African continent have been present in the Roman Empire since antiquity. In the absence of a census, it is difficult to assess their numbers today. But what we do know is that some of them became illustrious figures – such as the emperor Septimius Severus [145-211], who was born in what is now Libya, or some thinkers, such as Saint Augustine [354-430], or Apuleius [124-170], who came from North Africa.

This presence continued over the centuries. Frederick II, king of Sicily and Holy Roman emperor from 1220 to 1250, welcomed Africans into his court and employed them in his service. He even made one of them, John “the Moor”, his chamberlain. Until the end of the fifteenth century, Arab and North African Muslims ruled over most of the Iberian Peninsula. And from the mid-fifteenth century onwards, wealthy families in central and northern Italy began to employ servants from Africa. Many Renaissance paintings bear witness to this.

So there is a shared history between Africa and Europe, much older and richer than one might imagine. But part of this history has not been considered relevant enough to be taught in schools. We have become accustomed to viewing history through the prism of the slave trade. This historical moment has somehow eclipsed, or masked, what came before. As a result, this history has been struck by a partial amnesia.

How has the perception of people from Africa changed over the centuries in Europe?

Before the seventeenth century, colour prejudice against Africans did exist, of course. But from the Middle Ages and into the Renaissance, the divide between Christians and Muslims outweighed most other considerations. Moreover, this prejudice was also directed virulently against other white-skinned groups, such as the Irish, who were perceived as savages by the English.

The real turning point was the development of the slave trade, when the Portuguese, French, English, Dutch, Spanish, Swedes, and Venetians became embroiled in this frenzied race for profit. Theories about the racial inferiority of Africans were then developed by Europeans to justify the slave trade.

Theories about racial inferiority were developed to justify the slave trade

This had a lasting effect on the perception of Africans after 1700. It was at this time that black people were dehumanized and regarded as commodities. This is well-documented from a historical point of view. We have numerous log-books, registers and account books that attest to this.

From that moment on, European identities were perceived as superior because of their economic power. Indeed, the slave trade changed people’s perceptions, but it also shaped and sedimented identities, by accentuating the separation between whites on one side and blacks on the other. 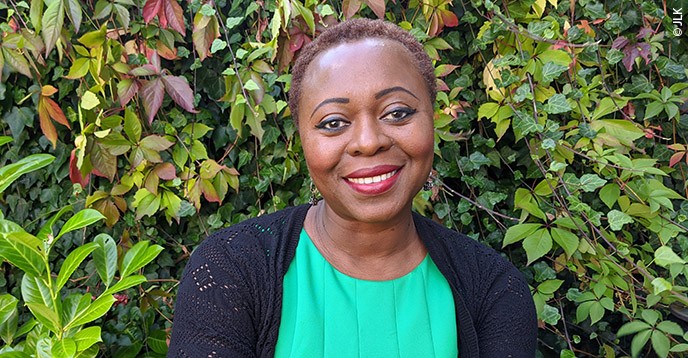 Is the work of historians bringing to light chapters in the history of people from Africa in Europe that have been little explored or overlooked until now?

Yes, I am very optimistic about this. Just the fact that I have been able to publish a book like mine, and that it has had such a response is significant. It is a very exciting time to be a historian, because you can sense that the lines are shifting – that a reflection is taking place that is leading to a different view of this aspect of history. And this reflection is also beginning to be translated  into teaching.

In the UK, we are currently trying to integrate what we call ‘Black History’ into the school curriculum. At the moment, it is only an optional subject. But in Wales, where I live, the Welsh Assembly has already decided to incorporate it into the curriculum. This is an important step.

In France, since the Taubira law – which introduced the teaching of the slave trade into the primary school curriculum in 2002 – part of this history is already being taught. The situation varies a lot from country to country, and there is still a lot to be done, but it is moving in the right direction.

At this stage, I think it would be useful to provide teachers with tools so that they feel comfortable teaching these chapters of our history – which are not just about the history of slavery, abolition, or migration, but cover a much broader field of study.

How have approaches to the memory of the slave trade in Europe evolved in recent years?

The memory of slavery still meets with strong resistance. We see states oscillating between two extremes: victimization on the one hand, and amnesia on the other. States resist because this memory challenges their national narrative. And even when they celebrate personalities from the African continent who have left their mark on history, they fail to recognize the role that Afro-Europeans play today in everyday life.

As a result, I am uncomfortable with an approach that canonizes some at the expense of others, though I recognize that this is obviously preferable to complete amnesia. Also, when we celebrate abolition, the historical aspect of black resistance is usually obscured.

Yet this resistance took place, particularly in southern Europe, where slave brotherhoods, initially founded to discuss religion, were, from the fifteenth century onwards, places of exchange and struggle against enslavement by their white masters. For example, the brotherhood of Nossa Senhora do Rosário dos Homens Pretos (Our Lady of the Rosary of Black People), was set up in Lisbon in 1470.

The role of those who fought alongside the abolitionists is also often forgotten. The historical reality is therefore much more complex than what is usually presented.

What is the link between this history and the violence – particularly by the police – against black people?

Police violence has its origins in colonial history

In this respect, I notice that my children's generation has a very different approach to that of previous generations. It is also a generation that is not afraid to defy the system or challenge the established order.

When I was a student, people thought that working hard to succeed would be enough to silence the racists. But it turns out that this is not enough.

Young people today no longer hesitate to speak out loud against the racism and discrimination they are subjected to. They are also freer and more comfortable with the fact that they have several identities – that of their parents, their origins, and of the society in which they are growing up.

The author of African Europeans: An Untold History, Olivette Otele is a Professor of History of Slavery and memory of Enslavement at the University of Bristol in the United Kingdom. Born in Cameroon and raised in Paris, she is the first black woman to be a History professor in the UK.