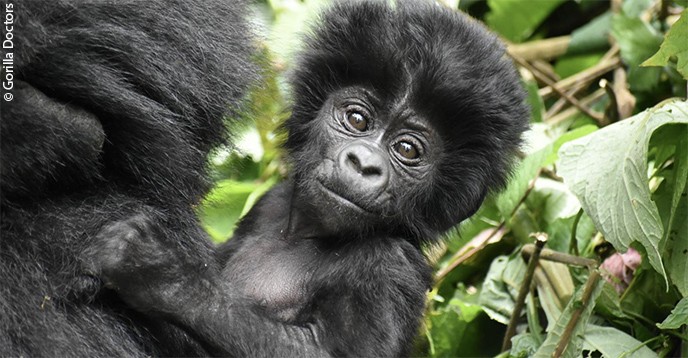 In the Virunga Massif, an area of about 450 square kilometres straddling the Democratic Republic of the Congo, Rwanda and Uganda, the mountain gorilla population was threatened with extinction by poaching, disease and deforestation.  Effective conservation measures involving local communities have led to an increase in the numbers of this iconic species.

There was a time, not long ago, when communities around Uganda’s Bwindi Impenetrable National Park and the Mgahinga Gorilla National Park were the mountain gorillas’ worst enemies. When the gorillas crossed their gardens, the inhabitants living close to these dense green rainforests would sound an alarm to confront the animals, who were viewed as a menace. This almost certainly resulted in the deaths of many endangered mountain gorillas.

Twenty-five years later, these great apes – of which the silverbacks, the males of the species, can grow to six feet tall and weigh up to 500 pounds – still wander through local gardens. But now if there are alarms, they only serve to alert park rangers. In fact, the numbers of these giants, who are gentle and shy unless threatened, have jumped from 620 individuals in 1998 to 1,063 today.

This dramatic increase led the International Union for Conservation of Nature to downgrade the threat level for the gorillas on its IUCN Red List of Threatened Species – from “critically endangered” to “endangered” in 2018.

The largest living primate – one of two subspecies of the smaller, more ubiquitous, eastern gorillas – the Gorilla beringei beringei inhabits high altitudes. Mountain gorillas are distinguished by their thicker, darker fur that protects them from the cold and incessant rain of their habitats.

The gorilla population has suffered decades of extensive threats including poaching, habitat deforestation, disease transmission from humans, and civil conflict. Active conservation strategies – which include continuous monitoring and veterinary attention, the treatment of respiratory diseases, and the removal of snares set for other small animals which trap baby gorillas – have also helped the population increase.

The increase in numbers is also due to the links forged between the gorillas and the local communities. “In the past, the conservation strategy was based on constraints. But now, the inhabitants look at parks as part of their heritage, and hence contribute to their survival, expansion and management,” says Andrew Seguya, Executive Director of the Greater Virunga Transboundary Collaboration (GVTC), which protects the mountain gorillas.

A consortium of the governments of the three countries – Uganda, Rwanda and the Democratic Republic of the Congo (DRC) – where the gorillas live and non-governmental conservation organizations, one of the main tasks of the GVTC is conducting censuses for these and other species in the region.

Routine censusing is a crucial part of adaptive management strategies, experts say. The exercise  helps determine whether a population is increasing or decreasing in size, and assessing whether conservation efforts are effective, or need to be modified.

The coalition’s latest census, the Bwindi-Sarambwe 2018 Surveys, was released in December 2019. It shows that the Bwindi-Sarambwe ecosystem – that includes Uganda’s Bwindi Impenetrable National Park, which is about 321 square kilometres, and the Sarambwe Nature Reserve in the DRC, spanning about nine square kilometres – had 459 gorillas divided in fifty groups, and thirteen solitary individuals. The Virunga Massif – that includes Uganda’s Mgahinga National Park, Rwanda’s Volcanoes National Park (a UNESCO Biosphere Reserve since 1983), and the Virunga National Park of the DRC –  had 604 gorillas as of 2016.

Inscribed on the World Heritage list in 1994, the Bwindi Impenetrable Forest is a typical tropical rain forest with an outstanding richness of biodiversity. Situated at an altitude between 1,160 metres and 2,600 metres above sea level, the thick tree cover gives the forest its name. The park’s volcanic hills are home to roughly half the world’s mountain gorillas.

The Mgahinga Gorilla National Park, on the other hand, is the smallest national park in Uganda – spread over just thirty-four square kilometres of land, and bordering both the DRC and Rwanda.

The benefits of tourism

All these parks are popular destinations for gorilla tracking. The improved security in their habitats has also contributed immensely to the increased numbers. Rebels in the area in the late 1990s had devastating effects on the gorillas and on tourism, explains Seguya, who was  executive director of the Uganda Wildlife Authority (UWA) for six years till March 2018. “The development of tourism has helped the governments to earn resources which they can plough back into conservation,” he says.

Referring to the latest attack on 24 April 2020 – the deadliest in the Virunga National Park’s recent history – when seventeen people, including thirteen rangers, were killed by suspected armed rebels, the park said in a statement that the tragic event would “not be allowed to undermine the Park’s commitment to economic and humanitarian development programmes in partnership with, and for the benefit of, the communities that surround the Park. More than ever, the communities aspire to live in a climate of stability, justice and peace.”

Although Uganda has ten national parks and a number of game reserves, the gorilla parks fetch more money from tourism than all the other parks combined. Gorilla tracking permits – which are rationed to curtail the number of visitors, and are in high demand – cost $700 per person for a group of eight people, for one hour a day. Permits in Rwanda cost $1,500, while the DRC charges $400.

To encourage community partnership, Uganda’s government has passed a law that makes it mandatory for the UWA to share twenty per cent of all gate collections from tourists with communities neighbouring the parks.

In Uganda, twenty per cent of all gate collections are shared with communities

This money is passed on to local governments as conditional grants to improve the livelihoods of  the area’s inhabitants. According to Godfrey Kiwanda, Uganda’s Minister of State for Tourism, Wildlife and Antiquities, “The revenue-sharing has improved our relationships with the communities near these parks. They now know that if we have many visitors, it will result in more money for community projects. We have built schools, hospitals and improved the road network in their areas.”

Besides revenue sharing, the UWA has also helped communities to start other income-generating activities. Before they were gazetted national parks, the Bwindi and Mgahinga forests were home to the Batwa tribe – driving them out of their traditional habitats meant providing them with alternative sources of livelihood. The wildlife authority helped them to start growing coffee, tea and holding craft workshops, and selling the products to tourists.

Other organizations, like the African Wildlife Foundation (AWF), have teamed up with the Nkuringo community near Bwindi to construct an eco-lodge there, with profits shared every year. “This community now has alternative sources of income which are connected to the gorillas. Once you have that environment, the gorillas will multiply,” Sudi Bamulesewa, AWF’s Uganda country director said.