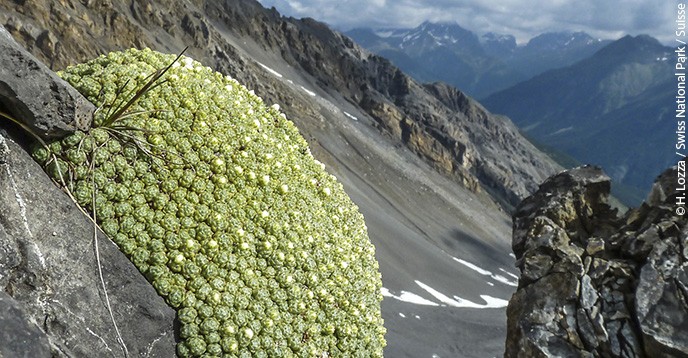 The Androsace helvetica plant grows at the summit of Piz Quattervals in the Livigno Alps, Switzerland.

Less spectacular and not as well-known as retreating glaciers or melting Arctic ice –  obvious indicators of global warming – the changes that modify the distribution of species are also less perceptible. Besides affecting biodiversity, these changes have direct consequences on our food and health.

Researcher in ecology, French National Centre for Scientific Research (CNRS), at the University of Picardie Jules Vernes in Amiens, France.

There are changes taking place all over the planet, at all latitudes. Most often, we are unaware of them. And yet they are altering the distribution ranges of the species on which we depend directly. This redistribution of living things is the tangible manifestation of the invisible movement of isotherms – imaginary lines of the same mean temperature that move towards the poles and mountain peaks like waves, driven by global warming.

The identification of these changes in the distribution of living things requires large amounts of data, both historical and recent. By meticulously documenting biodiversity over time, scientists can map the distribution of past and present species in an attempt to detect potential migrations.

For terrestrial environments, scientists have identified migrations that are mainly oriented towards the poles in latitude, and towards mountain peaks in altitude. This includes mammals, birds, amphibians, freshwater fish, insects, and even organisms that are less mobile, such as plants. The average migration speed of these organisms in the lowlands is largely slowed down by the fragmentation of habitats linked to human activities.

This is not so much the case in mountain areas, where the impact of human activities is reduced, and the isotherms are closer together.

In France, forest plant species migrated at an average speed of thirty metres per decade, between 1971 and 1993. Driven by rising temperatures and the shifting of isotherms, many plant species have already reached the summits of several European mountain ranges. Observations made on 302 mountain peaks in Europe show that the number of plant species that have colonized the summits is increasing over time – this trend is becoming more pronounced with the acceleration of global warming.

On average, the gain in species – affecting eighty-seven per cent of the European summits studied – was five times greater between 2007 and 2016 compared to the period between 1957 and 1966.

These phenomena have led to a new cohabitation between species endemic to certain peaks – such as the ciliated androsaceus, which is only present in the eastern Pyrenees – and more competitive species found at lower levels, such as mountain Arnica or Alpine meadow grass. The increase in biodiversity at the summits of European mountain ranges may at first seem like good news. However, in the long term, there is a risk that competition between colonizing and endemic species will be to the detriment of the latter, and lead to the total disappearance of some of them.

This phenomenon of extinction has already been noticed in the Peruvian mountains – eight of the sixteen species of birds observed in 1985, and living on mountain ridges above an altitude of 1,300 metres, could no longer be found in 2017.

In the marine environment, most organisms are much more sensitive to a rise in temperatures. The poleward movement of species is therefore much more rapid and significant in the seas and the ocean than on land. The average poleward migration of marine organisms is around sixty kilometres per decade – five to six times faster than that of terrestrial organisms.

Some studies have also shown vertical migrations of several species of marine fish to deeper waters, to escape the temperature increase in surface waters. In the North Sea, for example, fish in the demersal (seabed) zone migrated to the depths at an average speed of four metres per decade between 1980 and 2004. These rapid shifts in marine biodiversity are more spectacular, and therefore more easily perceptible than in terrestrial environments. They make the seas and the ocean the best monitors of the consequences of global warming on the redistribution of life.

Humans depend on biodiversity for food, health, well-being, production activities, recreation  and cultural enrichment. Therefore, a global redistribution of this biodiversity will have an impact on all these aspects.

The movement of species that affects our halieutic (linked to fishing) resources are particularly striking, and has a direct effect on human nutrition. This is particularly the case in the northward migration of mackerel schools in the North Atlantic – which by 2010, had led to major economic and geopolitical conflicts between different European countries fishing in the area.

A source of conflict between countries

Since biodiversity knows no borders, we can expect an increase in the number of conflicts and tensions between neighbouring countries related to the movement of commercial species from one economic zone to another. The geographical distribution of all the goods and services provided by biodiversity will be completely reshuffled on a global scale.

The same applies to the redistribution of vectors of pathogens, and therefore, diseases. With global warming, the emergence of new disease vectors (mosquitoes and ticks) at latitudes and altitudes previously free of these species is already a reality – with health, social and economic costs that must be anticipated.

In South America and East Africa, populations living in mountainous regions are more affected by malaria than in the past. Rising temperatures favour the altitudinal migration of mosquitoes carrying the parasites causing the disease. In northern Europe, drier summers and milder winters are modifying the abundance and distribution of small mammals such as rodents – the main hosts of the Ixodes ricinus tick, vector of the bacterium Borrelia burgdorferi, the Lyme disease pathogen.

Beyond these direct impacts on human well-being, the redistribution of living organisms also has an indirect effect on the very dynamics of global warming. In the Arctic, for example, in the same way, melting sea ice, tundra shrub expansion and the advance of the boreal forest towards the North Pole are factors that reduce the albedo (reflectivity) of the North Pole and thus accentuate warming.

A response to global warming

This redistribution of living things is not necessarily synchronous with global warming. In general, the average speed of movement observed towards mountain summits is eighteen metres per decade, half as fast as the speed at which isotherms moved upwards over the same period – forty metres per decade, on average. In forest plant species, for example, reproduction is the only way to displace the next generation – by dispersal, in the form of seeds.

Only seeds that have been displaced under favourable climatic conditions germinate and allow the establishment of a new population beyond the initial distribution range. Species with a long and slow life cycle, such as trees, thus show even greater delays in response to climate forcing. These delays mean that even if warming were to stop today, we would continue to observe changes in the distribution of life for decades to come.

The redistribution of living organisms in response to global warming poses new challenges. There is, therefore, an urgent need to step up efforts to support research to improve our understanding of the consequences of this phenomenon – and to take it into account while making political and economic decisions. It is through appropriate international governance integrating this global dynamic, that we will increase the chances of minimizing the potential negative consequences that this redistribution of living things could have on our well-being.