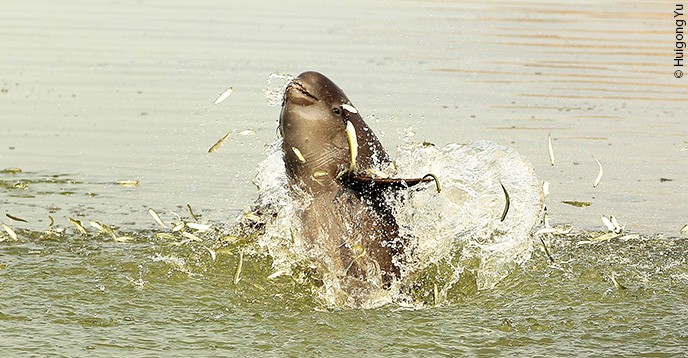 With only 1,012 individuals still living in the wild in 2017, the finless porpoise has been listed as critically endangered on the IUCN Red List.

Since Qi Qi, the last-known baiji, a freshwater dolphin, died in captivity in 2002, the  long-nosed white-bellied Yangtze River dolphin is thought to be extinct.
The author, a leading baiji expert and Secretary General of China’s National Committee for UNESCO’s Man and the Biosphere (MAB) Programme, outlines the Chinese government’s efforts to ensure that other threatened freshwater cetaceans, like the finless porpoise, do not suffer the same fate.

Wang Ding
Professor at the Institute of Hydrobiology (HIB) of the Chinese Academy of Sciences, he is a member of the International Union for Conservation of Nature Species Survival Commission(IUCN-SSC) Cetacean Specialist Group, and the Chinese National Committee for DIVERSITAS.

As part of my work at the Institute of Hydrobiology in Wuhan since 1982, I spent twenty years with Qi Qi [pronounced chee-chee], the world’s only captive baiji Yangtze River Dolphin (Lipotes vexillifer, “the flag-bearer who was left behind”).

Rescued from a fisherman’s net in 1980 after he had been accidentally hunted when he was only 2 years old, the injured Qi Qi lived in the Wuhan Dolphinarium for over two decades. The death of this “living fossil” from old age in 2002 was an emotional blow, personally. I couldn’t accept that the species, which is believed to have flourished in the Yangtze for over 20 million years, could soon be labelled “extinct”.

The death of this ‘living fossil’ was an emotional blow, personally

Revered in China as the “goddess of the Yangtze”, the baiji has been described in the Erya, the oldest surviving Chinese dictionary, dating back to 200 BC. This only strengthened our resolve to protect Qi Qi’s fellow creatures before they completely disappeared. Unfortunately, we found that it was already too late.

In 2006, I led a thirty-nine-day expedition to search the Yangtze River for any trace of the last remaining baiji. A team of over sixty leading marine biologists – from China, Japan, Switzerland, Germany, the United Kingdom, Canada, and the United States – used the most advanced detection techniques available at the time, but failed to find a single baiji. A year later, the graceful creature was declared functionally extinct by Biology Letters of the Royal Society of Biology, UK.

Even though unconfirmed sightings of the baiji continue to be reported, there is very little chance that this long-snouted dolphin – that relies on sonar rather than on its eyes to navigate the murky river waters – will ever be found again.

This unique freshwater dolphin, who was believed to protect fishermen and boatmen along the 1,700-kilometre waterway from central China all the way to the Pacific in ancient times, was found only in the middle and lower reaches of the Yangtze, and its connected big lakes.

According to incomplete statistics, human activity was to blame for ninety per cent of known baiji deaths before 1985. Industrialized fishing, illegal and harmful overfishing, and the unbridled growth of container ships, coal barges and speed-boats are the main causes of the river dolphin’s  population decline and range contraction during the last several decades.

Scientifically speaking, the role of river dolphins as an indicator is particularly important because it can be used to monitor the status and trends of freshwater biodiversity in rivers.

Protecting the “river of life”

Another cetacean in the Yangtze, the finless porpoise (Neophocaena asiaeorientalis ssp. asiaeorientalis), shares almost the same habitats as the baiji, and therefore faces the same threats. Also known as “Yangtze mermaids”, these smaller bath-tub-sized cetaceans – which lack a proper dorsal fin and have a small dorsal ridge on their backs instead – have been listed as critically endangered on the International Union for Conservation of Nature’s IUCN Red List. Their number has been decreasing rapidly – with only 1,012 individuals still living in the wild in 2017, in spite of conservation efforts.

There is hope, however. Over the past few decades, the environmental management of local governments has improved significantly. While China’s economic development took priority in the 1980s, the government and local authorities began to realize its environmental impact in the decades that followed, and have started to take measures to protect the environment.

The longest river running through only one country, and the third-longest in the world, the Yangtze is known as the “river of life” for obvious reasons. Accounting for forty per cent of China’s fresh water, it is literally the source of life for millions of people, and wildlife such as ancient sturgeon, snub-nosed monkeys and giant pandas. Its drainage basin comprises only a fifth of China’s land area, but generates as much as one-third of China’s gross domestic product (GDP).

To restore the ecosystem and to preserve biodiversity, a ten-year fishing moratorium in all the natural waterways along the Yangtze River was introduced in January 2021. Two months later, in March, the Yangtze River Protection Law came into effect, further strengthening the ecological protection and restoration of the river basin. Besides promoting the implementation of the fishing ban at the legislative level, the new law emphasizes the need for sustainable socio-economic development at the national and regional levels.

To restore the ecosystem, a ten-year fishing moratorium was introduced along the Yangtze

Nine national and local nature reserves – some of them comprising river sections and semi-natural ex situ reserves – have also been established along the river for the conservation of freshwater dolphins. Originally established as a sanctuary for the baiji in the last century, the Tian-e-Zhou Oxbow Nature Reserve – a twenty-one kilometre oxbow lake described as “a miniature Yangtze” – an area of wetlands near Shishou in Hubei province, now holds approximately 100 finless porpoises. These creatures profit from ex situ conservation measures originally designed for the baiji.

In a major boost for the critically endangered mammals, the Chinese government upgraded the protection of Yangtze finless porpoises in February 2021, to national first-level protected species – the country’s highest level of protection for wild animals.

Today, nearly twenty years since Qi Qi died, over twenty non-governmental organizations (NGOs) are involved in the protection of its smaller cousin. The participation of the public has been encouraged, with local volunteers patrolling day and night along the middle and lower reaches of the river, and in the Poyang and Dongting Lake areas, to protect finless porpoises.

In a bid to preserve intangible local culture, efforts are being made to ensure that the local memory, traditional culture in the form of Chinese legends and folktales, and ecological knowledge of the baiji are kept alive. Stories about Qi Qi are published and read by children across China. I am hopeful that memories of these unique and elegant dolphins will remain forever.