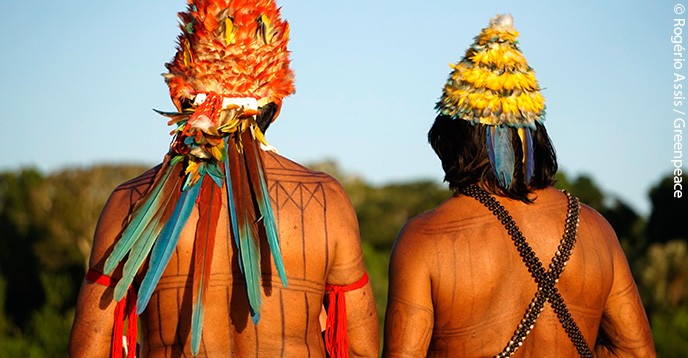 The Munduruku people, who have inhabited the indigenous territory of Sawré Muybu in the heart of the Amazon in northern Brazil for generations, ensure the conservation of 178,000 hectares of rainforest.

Year after year, scientific studies are condemned to chronicle the sixth mass extinction – the decline of living organisms, the loss of species, the over-exploitation of resources, and the degradation of natural habitats. Ecosystems, which provide services that are essential for our existence, are declining at an unprecedented rate, against the backdrop of the climate crisis.

However, it is not too late to (re)act. Long-term conservation measures are successfully halting the decline of some threatened species. Protected areas, which today represent seventeen per cent of the earth’s surface, serve as a brake on urban and agricultural encroachment. The goal is to reach thirty per cent by 2030. But 100 per cent of humanity must be reconciled to living alongside all living beings right now.

The knowledge of indigenous peoples – with its mythological and cosmological dimensions – is based on a more harmonious coexistence with nature, and can inspire practices that are more respectful of biodiversity. Because, if the sharing of scientific data is essential, if large-scale political action is necessary, change also requires – perhaps first of all – an awareness of the deep and multiple links that unite us with nature. Nature has been presented as the antithesis of culture for too long.

It is now time to question the utilitarian conception inherited from Descartes, which presents humans “as masters and owners of nature”.

“Cultural diversity is as necessary for humankind as biodiversity is for nature”, proclaims the UNESCO Universal Declaration on Cultural Diversity. Since its creation, the Organization has worked to promote the reconciliation of humans with their environment – through its actions in favour of world heritage, and its Man and the Biosphere (MAB) programme, which celebrates its fiftieth anniversary this year.

This issue of the Courier is an invitation to become more aware – to be re-enchanted by nature, to reconnect with it, to be open to new ways of being alive, to marvel. It is a call to reinscribe ourselves fully in our environment, to recognize ourselves as living beings among other living beings. It is an attempt to disprove the maxim stated by French palaeoanthropologist Pascal Picq, that “Man is not the only animal that thinks, but he is the only animal that thinks he is not an animal”.