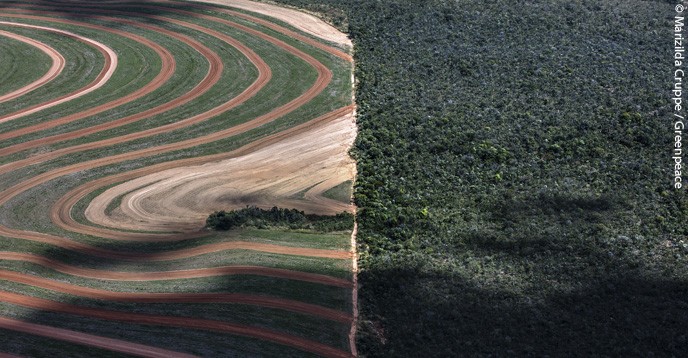 The intensive agribusiness in northeast Brazil is responsible for the massive deforestation of the Cerrado, one of the world's most diverse tropical ecosystems.

The destruction of ecosystems is not just bad news for the planet, it’s also harmful for the health of humans. The emergence of the Covid-19 pandemic in 2020 is just one manifestation of the proliferation of zoonoses – diseases transmitted from animals to humans.

In 1997, I went to Borneo to investigate fires which had been raging uncontrolled for months across a vast area of pristine tropical forest. An intense El Niño event had triggered a deep drought, and a thick yellow haze had settled over much of Indonesia, Malaysia, and beyond.

The ecological and human damage was immense. Some of the most undisturbed, nature-rich forest on earth was burning, and thousands of species of plants, birds, and rare animals like orangutans were at risk. The sunlight had dimmed, the temperature had dropped, trees were not flowering, crops barely grew, and millions of people were suffering from severe respiratory diseases.

Months after monsoon rains finally doused the fires, a mysterious, deadly disease broke out hundreds of miles away – near a town called Sungai Nipah, west of Kuala Lumpur,  Malaysia. Here, tens of thousands of pigs were being farmed among commercial mango and durian orchards. For no discernible reason, first the pigs, and then many humans, were struck down by seizures and headaches. To stop the new, highly infectious disease spreading, nearly a million pigs had to be destroyed – but not before 105 people had died.

It took six years for disease ecologists to link the destruction of the forest in Borneo with the  disease in the Malaysian pig farms. What had happened, it emerged in 2004, was that certain species of fruit bats which usually foraged on flowering and fruiting trees deep in the Borneo forests, had been forced by the 1997 fires to seek new food sources.

Some of these bats had gone to Sungai Nipah, where they had been observed roosting in the trees and dropping pieces of half-eaten fruit into the many pigpens below. Bats are well-known reservoirs of many viruses and – just as they have been linked to the emergence of deadly diseases like Ebola and Marburg in Africa – scientists found that bats arriving in Malaysia carried the Nipah virus, which they had passed to the pigs in the fruit and their urine.

Nipah is just one of many hundreds of animal-borne, or zoonotic diseases, which have jumped from animals to humans in the past fifty years. Increasingly, it is believed, many have done so as a direct result of the human devastation of nature – which now sees one million species threatened with extinction.

“The more we destroy nature, the more likely we are to see fearsome diseases like Covid-19 emerging,” says Kate Jones, professor of ecology and biodiversity at University College London (UCL). The coincidence of the new diseases with the destruction of biodiversity is highly significant, according to her.

They include some of the most deadly diseases ever encountered by humans – like HIV, Ebola, Lassa fever, Marburg, and Simian foamy virus, all of which originated in Africa; Nipah virus in South East Asia; Chagas disease, Machupo and hantavirus in Latin America; Hendra in Australia; Middle East Respiratory Syndrome (MERS) in Saudi Arabia; as well as Severe Acute Respiratory Syndrome (SARS) and coronavirus disease (Covid-19), both of which first emerged in China.

Some, like Ebola, have been linked to deforestation; others, like Lyme disease, occur where suburban areas sprawl into newly-cleared land. Many more are believed to have been caused by hunting, or are associated with wildlife markets and the intensive farming of animals.

Deforestation on a massive scale

“Biodiversity loss is becoming a big driver in the emergence of some of these viruses. Large-scale deforestation, habitat degradation and fragmentation, agriculture intensification, our food system, trade in species and plants, anthropogenic climate change – all these are drivers of biodiversity loss and also drivers of new diseases. Two-thirds of emerging infections and diseases now come from wildlife,” Jones says.

Two-thirds of emerging infections and diseases now come from wildlife

“The loss or reduction of biodiversity is not the culprit. It is the interactions between humans and biodiversity,” insists Sean O’Brien, president and CEO of NatureServe, a non-profit headquartered in the United States, with scientists working with global conservation organizations.

Intensive farming – especially the clearing of forests to expand farming – can increase the frequency of contact between humans and wildlife and expose us to diseases never encountered before by humans, O’Brien explains. “We are bringing together wildlife that would never naturally encounter each other in nature, creating bizarre links in a chain that can allow a disease to jump from one species to humans via another species, even if that disease might not be able to get to us directly.”

“Pathogens circulate in wildlife hosts, and some have the potential to jump to humans, but they rarely do, in undisturbed, natural ecosystems. But when people degrade or destroy natural habitats, the animal community changes dramatically,” says Richard Ostfeld, Senior Scientist at the Cary Institute of Ecosystem Studies in Millbrook, New York, who researches how diseases like Lyme emerge in degraded places.

“Some of the most important zoonotic hosts – the rodents, and sometimes, bats – often increase in abundance as their predators and competitors are driven away. Biodiversity loss increases the contact rates between the rodents or bats and people, so increasing the threat of infectious diseases,” Ostfeld says.

Carlos Zambrana-Torrelio, Associate Vice President for Conservation and Health at EcoHealth Alliance, and a researcher at the Bolivian National Herbarium, works on the links between biodiversity and human actions with the United Nations’ Convention on Biological Diversity (CBD). “The present Covid-19 pandemic is not the first time we have seen these epidemics and pandemics coming from wildlife and causing very high mortality. HIV jumped from primates to humans, haemorrhagic fevers like hantavirus and Machupo virus in Bolivia jumped from rodents into humans,” he points out.

Whether biodiversity loss increases the number of viruses passing to humans, or reduces them, is complex. Logically, the richer the biodiversity, the more pathogens and viruses will be circulating in animals,  and are therefore more likely to jump to humans. However, many studies show that more species mean less diseases – and that a rich biodiversity acts to protect species which evolve together. It is only when a natural system is disturbed that viruses like coronavirus or Ebola are passed on.

Felicia Keesing, a disease ecologist at Bard College in Annandale, New York, has studied twelve diseases, including West Nile fever and Lyme disease, in ecosystems around the world. In every study, she found that diseases became more prevalent as biodiversity was lost.

Species which are crammed together in biodiversity-poor habitats can also spread emerging diseases, says Eric Fèvre, Chair of Veterinary Infectious Diseases at the University of Liverpool in the United Kingdom. “Farmed animals are often the end product of a loss of biodiversity. As we select for better cows, chickens or pigs, we create populations of animals that often live in intensive conditions, but where the genetics are very similar. This creates risks for the emergence of diseases, because if these genetically-uniform large populations are susceptible, disease can spread very quickly,” he explains.

The expert is backed by Christine Kreuder Johnson, who leads the EpiCenter for Disease Dynamics of the One Health Institute at the School of Veterinary Medicine, University of California, Davis. In a new four-year study, she shows how it is the animals that humans hunt, and whose habitats we destroy the most, which are the ones with the most viruses dangerous to humans.

“The consequence is, they’re sharing their viruses with us. It is actions by humans which simultaneously threaten species survival and increase the risk of spillover. In an unfortunate convergence of many factors, this brings about the kind of mess we’re in now,” said Johnson.

By breaking down the natural barriers between species and destroying biodiversity, she argues, we have opened the door – not just to Covid-19, but potentially to many more viruses and pathogens.

The little frog that lost its lustre, The UNESCO Courier, April-June 2018

Man and nature: living in harmony, The UNESCO Courier, June 2009