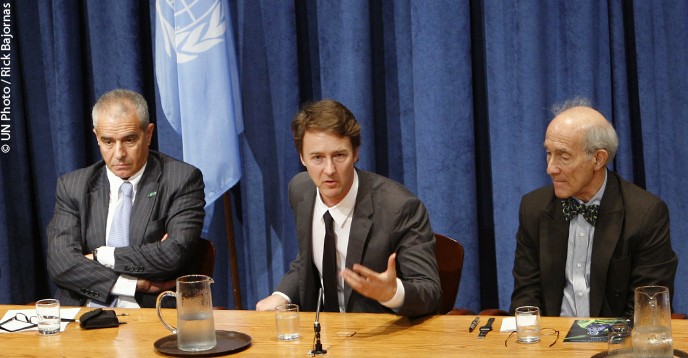 The decline in biodiversity puts the very future of humanity at stake. And yet, in spite of repeated warnings, we continue “the race to the bottom, for the short-term bottom-line” and to “wreak extensive destruction on other living things”.
Edward Norton, actor, filmmaker, activist, and United Nations Goodwill Ambassador for Biodiversity, calls for a change of course.

One million animal and plant species are threatened with extinction. How does the threat of this mass extinction make you feel on a personal level?

Dismayed and angry, because the question is, more appropriately: ‘How does the threat of mass extinction driven by human activity make you feel?’ One can only be dismayed to learn what a violent and extensive destruction we’re wreaking on other living things. But it has to be acknowledged that we’ve now known about this impact in a deep, data-supported framework of confirming science.

And yet we continue, in the face of all the evidence, including the clear evidence that this behaviour threatens the stability of our way of life and our economies – the large majority of our industries continue the race to the bottom for the short-term bottom line. This “I’ll be dead, you’ll be dead, so let’s financially maximize in the short term and leave the problem to our grandkids” attitude... that’s what makes me angry. History will not be kind to those denying and obfuscating for personal gain, and we need to call them out.

What have you learned from your commitment to protect biodiversity?

Biodiversity sometimes has an academic ring to it. I like to characterize it as the “richness of life”, because that encompasses both the spiritual value, to all of us, of the magically complex web of life on this planet that we live on – the true miracle of life’s wild incarnations – while also acknowledging that our whole economy is tied to healthy biodiversity.

Our whole economy is tied to healthy biodiversity

I like the example of bees and butterflies. A trillion dollars of investment in a human technology to pollinate our crops cannot replicate what pollinators do for us for free. But we’d rather let chemical companies keep making pesticides that are causing a collapse of the populations of pollinators. This is suicide, both economically and in terms of food security.

Yes, in many places and many ways. Pastoralist herders and farmers in sub-Saharan Africa – where I’ve spent a lot of time – are facing intensifying cycles of drought and floods directly stemming from global warming and the clearing of forests. And in places like the Coral Triangle of Indonesia – where my father worked with the Nature Conservancy for many years – overfishing is devastating the livelihoods of many poor communities. Same in West Africa. And that increase of food insecurity driven by overfishing is leading to more killing of wildlife. This directly leads to more exposure to the zoonotic [diseases passed from animals to humans] transfer of viruses which – as we’re now experiencing – affects everyone.

One of your top priorities as UN Goodwill Ambassador for Biodiversity is to increase “people’s focus on the fact that human well-being is intertwined fundamentally with biodiversity”.  Do you feel that your voice is being heard?

Sometimes it’s very frustrating to feel that voices all over the world are getting very loud about these issues and yet, the political will to act boldly is stymied by entrenched industries who put the brakes on the policy shift we need.

I don’t really assess ‘my success specifically’ in terms of awareness. I look at myself as part of a generational chorus of voices trying to insist that this becomes the most important issue of our time. And I do think awareness and concern grows greater in each subsequent generational demographic.

What have been your greatest successes in terms of raising awareness?

I feel personally successful when something I’ve been working on for many years, like the development of the Chyulu Forest Carbon Project [in Kenya], is realized as a goal. It took us over six years of work – a partnership between the Maasai Wilderness Conservation Trust and Conservation International – to get that project certified as a REDD+/VCS (Verified Carbon Standard)* project, generating about 650,000 tons of offset per year. And now we’re selling those credits to fund community conservation and development. That’s a tangible success.

You have travelled the world to raise awareness about making the way we live sustainable for our planet. What have you learned from the people you met along the way?

I’ve learned that this is a challenge that is truly understood across cultural, racial, economic, and religious lines.  It transcends all of that and unites us. I have young Maasai friends in Kenya who are every bit as passionate about this as my Indonesian friends and my American friends. That gives me hope.

The challenge of living sustainably transcends all differences, and unites us

The Intergovernmental Science-Policy Platform on Biodiversity and Ecosystem Services (IPBES) report finds that global goals for nature conservation cannot be met by current trajectories. How do we change course?

Our national political leaders have to stop taking credit for incremental measures that are ultimately irrelevant. We need an economic policy that forces the massive social cost of carbon and environmental degradation in all forms to be borne by those doing the damage. Until we stop socializing those costs and make the “free market” bear its authentic costs of doing business, non-sustainable practices will not end.

Finally, how do you see the future?

It’s daunting, but we have to remain determined. And I think human ingenuity has created solutions to complex problems over and over again – often in ways that were unpredictable even just on the cusp of their emergence. We can do it.

*REDD+ stands for countries' efforts to  reduce emissions from deforestation and forest degradation, and foster conservation, sustainable management of forests, and enhancement of forest carbon stocks. The Verified Carbon Standard, Verra or VCS, is a standard for certifying carbon emission reductions.

Learn more about how UNESCO and Guerlain are supporting biodiversity through the Women for Bees programme. 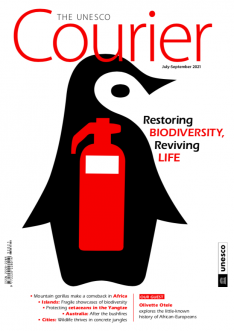