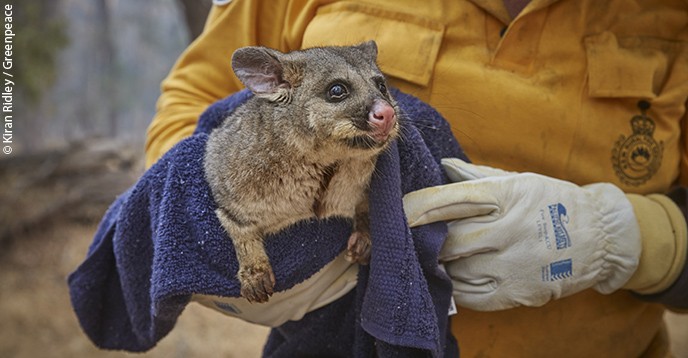 A possum with burns was rescued as it was fleeing a fire in the Snowy Mountains, New South Wales.

Millions of hectares of vegetation destroyed and 3 billion animals killed or displaced. The toll of the bushfires that ravaged New South Wales and Victoria in 2019 and 2020 is even more horrific than earlier estimated. Experts say the regeneration of Australia’s lost biodiversity will take many, many years, and will require human intervention – especially if weather conditions remain unfavourable.

“When you walk into a forest that’s been burnt this badly, the overwhelming thing that hits you is the silence. No bird-song. No rustling of leaves. Silence.” This is how Mike Clarke, professor of zoology at La Trobe University, Melbourne, described Australia’s many forests that were recently decimated by the country’s worst bushfires.

“This stands out as the worst disaster in Australia’s recorded history,” Clarke says. The figure of the area that has been burnt – 13 million hectares – is “hard to get your head around.” For scale, this is an area bigger in hectares than Holland, Denmark and Switzerland combined. All burnt to a crisp. Homes, forests, animals, plants – all gone.

The timing is also significant in understanding the scale of the impact. “This comes on top of Australia’s driest years on record,” Clarke adds.“Populations of animals were already on their knees due to the drought. Australia’s weather conditions in the next three or four years will be critical to what recovery looks like.”

Three billion animals were killed or displaced in the bushfires, according to a July 2020 study by ten scientists from five institutions commissioned by the World Wildlife Fund for Nature (WWF). Christopher Dickman, professor in terrestrial ecology at The University of Sydney and fellow of the Australian Academy of Science, who oversaw the project, said the study’s main findings came as a shock, even to the researchers. “Three thousand million native vertebrates is just huge. It’s a number so big that you can’t comprehend it,” he told The Guardian newspaper.

This figure is conservative, Clarke believes. “That’s just mammals, birds, reptiles. If we added invertebrates to that, the numbers would be astronomical.”

One thing that must be clear, though, is that Australia’s bush has always burnt quite severely. “The severity isn’t unprecedented,” says Alan York, professor of Fire Ecology at the University of Melbourne. “What is unprecedented is their earliness in, or before, the usual fire season, and the volume of fires in so many places, which is far more unusual.”

The impact on Australia’s threatened species is potentially devastating. Seventy nationally threatened species have had at least half of their habitat burnt, Clarke says. These include animals such as the long-footed potoroo and the Kangaroo Island’s glossy black-cockatoo – “a rare and spectacular bird,” he adds. Fires have burnt their food sources, shelter, or both.

Koalas in northern New South Wales have had most of their habitat burnt. The iconic nature of these animals sometimes overshadows other ecosystem horrors, Clarke says. “They’re the poster child of this crisis. But in reality, a whole suite of wildlife – large possums, all sorts of plants that live in alpine ash, whole communities of organisms – are all at risk now.”

How resilient is the Australian bush?

It may take years for these species to recover. And that may require human assistance – with captive-bred frogs in Australia’s zoos, for example. “Otherwise, we’re hoping animals survived in unburnt pockets,” York explains. He remains somewhat optimistic, saying the Australian bush has a “dramatic capacity to recover.”

There are, however, caveats. Rainforests and alpine areas of Tasmania, for instance, don’t have much experience of fires, so they’re more vulnerable to repeated fires, he says. And under the current climate change model, increasing fires are inevitable.

Under the current climate change model, increasing fires are inevitable

Some of several “human interferences” that’ll most likely hamper recovery include habitat removal from land clearing, and a lack of urgent political action on climate change.

But is the Australian bush really resilient enough to recover? Not everyone shares the fire ecology expert’s tempered optimism. “Seventy per cent of the rainforest has been burnt – it’s the bit of the landscape not adapted to fire – so it’s really unclear how, and if, it’ll come back,” Clarke says.

Seventy per cent of the rainforest has been burnt

A recovery could take centuries

The problem is, lots of critical resources have been incinerated. For example, many fauna – cockatoos, parrots, possums, bats – rely on hollow logs on the ground, or on trees to den in or breed in. Not only have those logs now gone, Clarke predicts that it will take one to two centuries for them to appear again, hollowed out. “What could disappear in hours in bushfire could take centuries to replace. Ecologists would call this a ‘complete state change’.”

An essential ingredient to recovery is soil. More soil than usual was burnt in these fires, as the droughts in recent years removed the pre-existing moisture. This means the essential nutrients held in the soil are no longer there either.

Experts say some immediate steps are being taken to help along the recovery of this vast area. A moratorium on logging has been proposed, and pressure is building to act more aggressively on the pest control of feral cats and foxes, in addition to introducing weed removal. “Weeds recolonize areas disturbed by fire. They use resources that native plants and animals might need,” York explains.

Identifying and protecting areas that did not burn is also an important subject for debate. Specifically, some are arguing that cultural burns may be better than the hotter, more intense, hazard reduction burning. Cultural burns are cool-burning, knee-high blazes that were designed to happen continuously and across the landscape, practised by indigenous people long before Australia’s invasion and colonization. The fires burn up fuel like kindling and leaf detritus, so that a natural bushfire has less to devour.

Since Australia's fire crisis began in 2019, calls for better reintegration of this technique have grown louder. But they may be of limited value at this crisis point, according to Clarke. “We need to appreciate how different things are now. Cultural burns happened to enable people to move through dense vegetation easily, or for ceremonial reasons. They weren’t burning around 25 million people, criss-crossed by complex infrastructure and in a climate change scenario,” he estimates.

Concrete measures to combat climate change are indeed crucial for the future of biodiversity. In spite of green shoots of optimism in some quarters, the prognosis of whether the bush will ever recover its biodiversity is looking somewhat grim. Breaking it down, Clarke surmises that “A chunk of it will be good – a third will be able to bounce back. A third is in question, but a third is in serious trouble. I’ve been studying fire ecology for twenty years, but we’re dealing with unchartered territory changing before our eyes.”