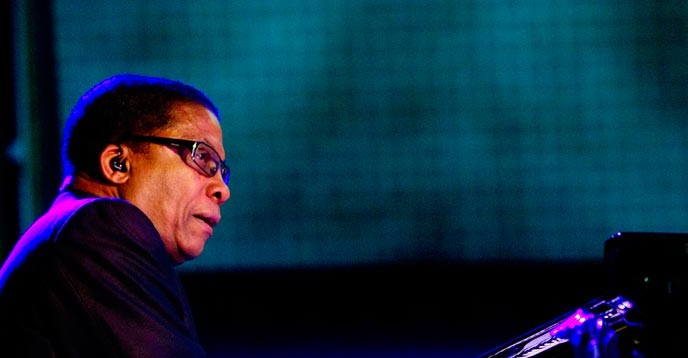 Herbie Hancock, the legendary American jazz pianist and composer, is the force behind UNESCO’s International Jazz Day, celebrated for the first time on 30 April 2012. In this interview he describes the humanist values of jazz and his mission as a UNESCO Goodwill Ambassador for Intercultural Dialogues.

What motivated you to propose the creation of International Jazz Day?

When I accepted the honour of being a UNESCO Goodwill Ambassador, in July 2011, I decided to dedicate my time and energy to a culture of peace. I therefore presented a project that would share the values of jazz on a global scale. The project was adopted by UNESCO’s General Conference in November 2011 and I hope this new International Day will stimulate interest in jazz, especially among young people.

You have been supportive of young people for many years, particularly through the Thelonius Monk Institute of Jazz, which you helped to establish.

I think that music – and jazz in particular, because it’s improvised – helps students to express themselves. Being able to express oneself is a very liberating act for a human being. We have statistics that prove that students who have gone through our program have done considerably better in other subjects, like math, science, literature. Being exposed to the values of jazz has a direct effect on their sense of hope, their sense of self-worth, because the values of jazz are very high values.

What are the values of jazz?

Living in the moment, working together and, especially, respecting others. Music, and jazz in particular, is an international language that represents freedom because of its origin – growing out of slavery.

Jazz is in the moment, and it’s non-judgmental: when you’re playing on the stage, you’re not judging what the other musician plays. What you have in mind is to be able to enhance it – whatever a musician plays, your job and your desire is to be able to help it to blossom. It’s not about “I don’t like what that person played,” because as soon as you have that judgmental attitude, it actually stops the flow of the music. There’s a sense of mutual cooperation. Those values are not only wonderful values to have for the creation of music; they are wonderful values to have for daily life.

Dialogue is part of the music and people can sense that, I believe. I’ll give you an example: In 1998, President Clinton asked the Thelonious Monk Institute to represent jazz for the United States at the Summit of the Americas in Chile. When we were on stage, I could look out at the audience and see the representatives of the different countries relaxing. I could see a glow come to their faces, and I could see the invisible barriers coming down. The next day President Clinton told us that we did more for intercultural dialogue than all of the heads of states and ambassadors that were there. (Laughs)

Your album The Imagine Project (2010) brings together musicians from the United States, United Kingdom, Ireland, Mali, Congo, Columbia, Somalia, Mexico, South Africa and India. It also blends different musical styles, from jazz to hip-hop. What was your intention in making this album?

When it came to thinking about doing another record, I asked myself what purpose would the record serve. I didn’t think this way when I started in the music business, but over time, from living life, and also through my practice of Buddhism, I ask questions like this of myself now. What would be my purpose of making this record? Is it just putting music on a disk, or would it have some deeper meaning?

One of the issues of the day is globalization, which is a process of human beings adapting to a sense of this being one world with one people. We are all human beings.

I wanted to address that issue musically, so I decided to make an album record that had songs performed by artists from different countries, in many languages. I wanted to make a global record. It’s in seven languages, and we recorded the songs in each artist’s country, so we went around the world to make this record!

I wanted to show the incredible potential that globalization holds for us, if we create the kind of globalized world we want to live in. We don’t want a selfish, greedy world. We want a world where people are not just thinking about ‘I’, but thinking about ‘we’. Imagine a world like that. That’s why I borrowed the name of John Lennon’s song “Imagine”.

Are you going back to Africa with jazz with this project?

When I made the Imagine project, I didn’t think of it as a jazz record. Jazz has its own kind of box that it can fit in; but I wanted to remove the walls.

Am I taking jazz back to its initial roots? My feeling is that the roots of jazz are in humanity.  So my answer is yes, but not just to Africa – the roots are also in Ireland, in various countries.

I think the roots of jazz are in humankind. This is why I would like to see jazz added to the List of Intangible Heritage, just as I would like to see important birthplaces of jazz – in Mississippi, New Orleans, Chicago or New York – inscribed on the World Heritage List.

Your mission at UNESCO is closely linked to World Heritage.

Yes, and I’m playing tomorrow night (30 January 2012) at UNESCO at the launch of the 40th anniversary celebrations of the World Heritage Convention, and I’m very proud to do so. I consider World Heritage preservation to be one of the highlights of UNESCO’s work. The sites are not just jewels of world culture, but also emblematic places for the history of countries and the transmission of this history to younger generations.

For my first mission as Goodwill Ambassador I visited World Heritage sites in South-East Asia, and was made even more aware of this significance. I had the honour of visiting Borobudur and Prambanan in Indonesia, and Angkor in Cambodia. This was an inspiring and uplifting experience. I saw how the development of a World Heritage site creates jobs for people and promotes local activity through arts and crafts, promoting development and growth.

I was also deeply moved by the kind of international and intercultural cooperation that the World Heritage sites created to preserve these treasures. Entire temples were dismantled and restored patiently, stone by stone. This is how I see the construction of peace in the world, and I am proud, as a UNESCO Goodwill Ambassador, to play my part in this effort.