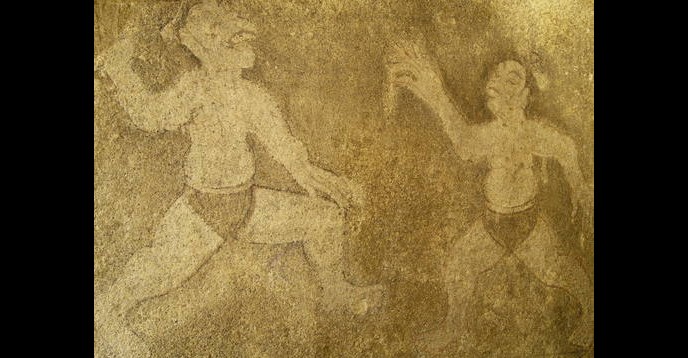 On 26 November 2018, ssirum/ssireum wrestling from North Korea and South Korea was jointly inscribed on the Representative List of the Intangible Cultural Heritage of Humanity. An unprecedented event! Revered and practised throughout the Korean peninsula, this sport has a centuries-old history.

The oldest written evidence for ssirum/ssireum dates back to the Yi Dynasty fourteenth century documents, according to Martial Arts of the World: An Encyclopedia of History and Innovation (2010). The book cites sources according to which King Chunghye (1315-1344) was reprimanded for irresponsibility, delegating his official duties in order to spend time practising ssirum/ssireum. In all fairness to him, though, he was 15 years old when he ascended the throne and 17 when he descended from it, before reigning again for four years until his untimely death. Years later, King Sejong (1397-1450), particularly famous known for his contributions to literacy, sentertained himself by holding competitions for his soldiers.

Indeed, according to the Encyclopedia, Ssirum/ssireum is said to have evolved into military applications, before becoming a popular pastime, still practised by thousands today.

Known for increasing perseverance, moral strength, vigour and wisdom, ssirum/ssireum is the most revered of all traditional sports − to the point of becoming a symbol of Korean cultural identity. It has been passed down from generation to generation, and is also taught in at various institutions, including schools.

The purpose of the wrestling is to put the opponent down by grabbing the fabric strap that he has tied around his waist and a thigh.

Open to all, regardless of age, the wrestling can take place anywhere (as long as the ground is sandy) and at any time, But it is mostly the tournaments organized during traditional festivals that attract the most people. These festivals generally coincide with the annual agricultural cycle, just like in past centuries. The winner of the competition wins an ox or bull – which is also a centuries-old tradition.

The oldest traces of this tradition can be found in the tombs of kings and nobles of the ancient kingdom of Koguryo (37B.C.- 668 A.D.), buried beneath protective mounds of earth, near Pyongyang. These wall paintings deal with a wide variety of subjects, including wrestling.

Inscribed on the World Heritage List in 2004, the Complex of Koguryo Tombs “provide precious information on the beliefs, the organization and the daily life of the society of the period,” as explained in "Korea: Land of the Morning Calm", the December 1978 UNESCO Courier issue, entirely devoted to Korean culture: its traditions, legends, music, painting schools, religions, alphabet and ancestral technologies.

More informaton on Korea, in the UNESCO Courier