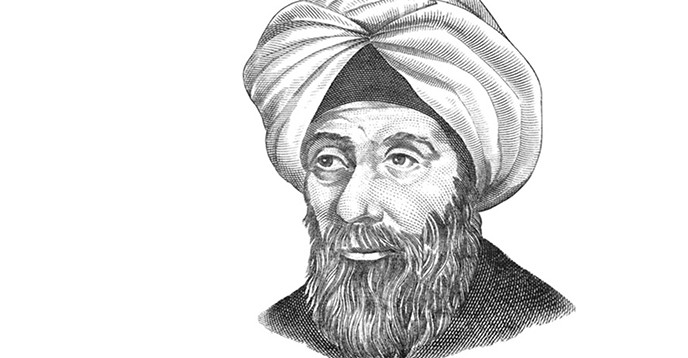 During the International Year of Light 2015, Ibn al-Haytham was celebrated at UNESCO as a pioneer of modern optics. He was a forerunner to Galileo as a physicist, almost five centuries earlier, according to Prof. S.M. Razaullah Ansari (India). Also known as Alhazen, this brilliant Arab scholar from the 10th – 11th century, made significant contributions to the principles of optics, astronomy and mathematics, and developed his own methodology: experimentation as another mode of proving the basic hypothesis or premise.

Abū Ali al-Ḥasan Ibn al-Haytham al-Baṣrī (965-1040), known in European Middle Ages by the name of Alhazen, was called among Arab scholars as ‘Second Ptolemy’ (Baṭlamyūs Thānī). He was actually a scholar of many disciplines: Mathematics, physics, mechanics, astronomy, philosophy and medicine. He was one of the senior most member of the Muslim scholars’ trio during 10th -11th centuries, the other two were al-Bīrūnī (973-1048) and Ibn Sīnā (980–1037).

From Basra, Ibn al- Haytham shifted to Cairo, where the Fatimid Caliph al-Ḥākim had invited him. The Caliph was a great patron of scientist-scholars, he got built an observatory for the astronomer Ibn Yūnus (d.1009)  and he founded a library Dār al–ʻIlm, whose fame almost equaled that of its precursor at Baghdad, Bayt al- Ḥikma(the House of Wisdom), established by the Abbasid Caliph al-Mā’mūn (reigned 813 – 833).

Ibn al-Haytham was a prolific writer. According to his own testimony, he wrote 25 works on mathematical sciences, 44 works on (Aristotelian) physics and metaphysics, also on meteorology and psychology. Moreover, his autobiographical sketch indicates clearly that he studied very thoroughly Aristotle’s (natural) philosophy, logic and metaphysics of which he gave a concise account.

His most famous book in Arabic was on optics, Kitāb fī al-Manāẓir, in Latin Opticae Thesaurus, which was translated anonymously in the 12th /13th century. It deals, in seven volumes, with experimental and mathematical study of the properties of light. Ibn al-Haytham’s Discourse on Light and tracts On the Light of Stars, On the Light of the Moon and On the Halo and the Rainbow are the main sources from which his working method can be deduced.

In the sequel, I exemplify the main features of Ibn al-Haytham’s method as the design of experiment in order to test a hypothesis, and not using it just for observation or discovery as used by his predecessors.

Scientific method: what does it mean?

The two well known characteristics of the modern scientific method are the theory building and experimentation.While the former is actually a sort of mathematical modeling of observational facts, the latter is not only just observation of a phenomena experimentally, but also includes in it the experimental proof of a hypothesis
regrading the phenomena in question. In other words, an experiment is designed to test the hypothesis on which the mathematical theory is actually based.

Recall here that Einstein in his General Relativity (or Theory of Gravitation) predicted that light bends by a large mass of matter by its gravitation like any matter. This hypothesis or deduction of his theory was tested in 1919, 1922, 1947 and 1952 during total eclipses of the Sun. The light of stars located behind the Sun is bent by the mass of the Sun, and could be observed clearly.

In all textbooks of the western world, the Italian physicist Galileo Galilee ( 1564–1642) is presented as the father of this scientific method. The historian of science, A.C. Crombie states in Augustine to Galileo (paperback Mercury Books, 1964) : “ Galilee combined ... his experimental method with the mathematical abstraction [expressed as mathematical equation] of observed regularities ... from which the observation could be deduced”.

The two medieval European scholars who were actually the main predecessors of Galilee are Robert Grosseteste (d.1253), and Roger Bacon (d.1294).

Robert Grosseteste was the teacher of Roger Bacon, whose sources for optics were Euclid, Ibn Sina’s Al- Qānūn, and al–Kindī’s Optics: Libre de aspectibus, the Arabic text of which is not extant. The Latin translation by the Spanish Gerard of Cremona was carried out in the 12th c. Robert propounded his theory of falsification of causes , i.e. experimental proof of testing rival hypotheses or mathematical models.

Roger Bacon’s main scientific work was in optics, with the title Opus Maius , and in the sixth chapter of which Roger exemplified the Scientia Experimentalis, i.e., his theory of science and scientific method. His sources were al–Kindi (d. ca.873) , Ibn Sīnā, Ibn al–Haytham , Ibn Rushd (d. 1198). According to Crombie (Robert Grossteste, and the Origins of Experimental Science, Clarendon Press, Oxford, 1953), “ Ibn al-Haytham’s few optical writings were translated anonymously [already] at the end of the 12th / beginning of the 13th century”.

According to the famous German scholar, Anneliese Maier (1905–1971), who analyzed the thoughts of 14th c. natural philosophers and scholastic science, in his book The    Predecessors of Galilei in Fourteenth Century(Rome, 1949), “the scientific revolution should not to be interpreted as a linear historical process [emphasis mine] initiated by Galileo’s innovation in mechanics and the increased use of experimentation thereafter”. In the 17th century scholars adopted many ideas from their scholastic predecessors.

The following hypotheses were tested by Ibn al-Haytham, for which he devised special experiments for various types of lights: Sunlight, twilight/morning light, reflected light from polished surfaces and from opaque bodies, refracted/transmitted light.

Rule 1. Rectilinear propagation of light irrespective of their source of emission.

Rule 2. “Every point of a luminous object ...radiates light along every straight line ... spherically,... I mean in all direction”. A result of this rule proves that the Sun, and even an artificial light source, radiates light from all its part.

On the basis of his experimental results, Ibn al-Haytham classified light sources into three types: luminous, reflecting and transmitting sources. Consequently, he applied his classification to the moon. In his tract: On the Light of the Moon, he investigated the nature of the moonlight and concluded that “ the experiment ... serve to prove that the mode of transmission from the moon is of the same kind as the already known mode of emission from self-luminous objects”.

In his Discourse on Light, Ibn al-Haytham presented his theory of light and particularly the definition of a physical ray. Besides he presented a dynamic concept of refraction of light, that is light is a movement of sort, with its reduced velocity in a denser medium. Further he went one more step and stated “that the path assumed by a refracted ray ... is always the one which is the easier and quicker”. Thus Ibn al-Haytham anticipated the so-called Fermat’s principle of Least Time (the path taken between two points by a ray of light is the path that can be traversed in the least time). Moreover, he discussed also the relation between light and heat.

Recall that Ibn al-Haytham substituted beams of light by straight lines and light sources by surfaces from the points of which straight lines originates in all direction (Rule 2 mentioned above). Despite the fact, that this sort of abstraction was known to his Greek predecessors, yet his major achievement lies actually in investigating the functional relationship between his mathematical abstraction and experiment.

Precisely speaking his methodology was the systematic use of experimentation for individual physical phenomena and at the same time the use of mathematical (or functional) representation of the physical phenomenon in question. For instance, in his theory of refraction, the property of transparency of the medium – today defined by refractive index) is related to with the angle of deviation of the refracted ray. In this sense Ibn al-Haytham was surely a forerunner to Galileo as a physicist, almost five centuries earlier.

It is by now quite known that the substitution of geocentric system of planets by heliocentric system of the world, as propounded by Copernicus (d.1543) and following him Galileo’s Book: Dialogue Concerning the Two Chief World Systems, the belief in authorities was undermined and questioned. The final blow to this overthrow came by Rene Descartes (d.1650), with his famous book: Discourse de la Methode (Leiden 1637), in which he addressed those scholars “ who profit solely by their natural pure intellect [and refuse to] have faith merely in ancient books, i.e., without contrasting authority  with experience and experiment”.

It is astonishing, that Ibn al-Haytham advocated exactly the same research methodology. In his tract, Doubts on Ptolemy, he wrote:

“Truth is sought for its own sake ... It is not the person who studies the books of his predecessors and gives a free rein to his natural disposition to regard them favourably, who is the seeker after truth. But rather the person who is thinking about them [and] is filled with doubts .. .who follows proof and demonstration rather than the assertion of a man whose natural disposition is characterised by all kind of defects and shortcoming.... A person who studies scientific books with a view to knowing the truth, ought to turn himself into a hostile critic of everything that he studies ... if he takes this course, the truth will be revealed to him and the flaws ... in the writings of his predecessors will stand out clearly”.

To sum up, it may be recalled that Ibn al-Haytham had to concentrate on the refinement and sophistication of antique methods of empirical observations, thereby developing his own methodology: experimentation as another mode of proving the basic hypothesis or premise.

The Irony of Islamic Middle ages

I would like to conclude on a despairing note by pointing to the irony of Islamic Middle ages in which even a practical science of optics remained in oblivion, despite thoroughly researched by Ibn al-Haytham. Strangely enough only one commentary on Ibn al-Haytham’s Optics was written in three centuries.

On the other hand, during the so-called ‘dark ages’ in Europe, Ibn al-Haytham’s optical Opus was immortalised by the English poet Geoffrey Chaucer (1320-1400) in “The Squire's Tale” (Canterbury Tales):

“They spoke of Alhazen and Vitello,
And Aristotle, who wrote, in their lives,
On strange mirrors and optical instruments”.

Here Alocean refers to Ibn al-Haytham’s (Alhazen/Alhacen is the latinised form of Al-Ḥasan), and Vitello, to the Polonis scholar Witelo (13th c.) whose book on optics is based substantially on Ibn al-Haytham’s Optics. It was attached to the Risner’s edition of Opticae Thesaurus. Witelo’s treatise contributed a good deal in transmitting the essentials of optical researches of Middle Ages down to Kepler and Descartes in the seventeenth century. Consequently the optics and its bye-product, the scientific method, indicate a continuity of development of sort during the sixteenth and seventeenth centuries Europe, which centuries are wrongly considered as a revolutionary period or a break from the past, thanks to the genius of al-Ḥasan Ibn al-Haytham.

Read also Over the Moon, by Hatim Salih. July-August 2009

Emeritus Professor of Physics at the Aligarh Muslim University, Aligarh (India), S.M. Razaullah Ansari has also chaired the International Commission for Science and Technology in the Islamic World.

Ansari’s major work is the critical edition of Zîj-i Muhammad Shâhî, the astronomical-mathematical  tables in Persian got compiled by Rajah Sawai Jai Singh (18th c.), famous for his observatories with masonry instruments.

Another major project on which he has been working is the Descriptive Catalogue of Scientific Manuscripts in Arabic and Persian, extant in the libraries of erstwhile Indian Subcontinent. For that reason, he has been a Consultant during 2006-07 to the International Project: Islamic Scientific Manuscripts Initiative, sponsored by Max Planck Institut für Wissenschafts-Geschichte (Berlin) and Dept. of Islamic Studies of McGill University (Montreal).